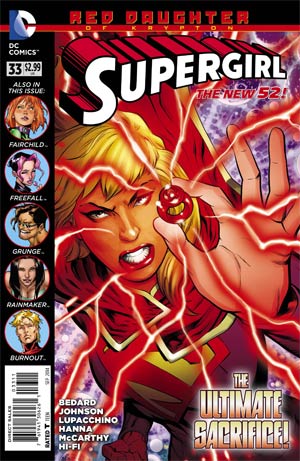 Click to enlarge
Supergirl versus Worldkiller-1, a parasitic being created on Krypton who wants to use Kara as a host. They find themselves on Earth, which now has an atmosphere polluted with Kryptonite. While the Maid of Might is able to prevent Worldkiller-1 from possessing humans by offering herself to him, she is unable to defeat her foe. Kara goes to Kansas, ground zero for the Kryptonite bomb to initiate a plan. Now poisoned, Supergirl flies to the sun and literally kills herself by removing and her Red Lantern ring. Guy Gardner can't even make contact with Kara as the planet Ysmault trembles. Has Supergirl made the ultimate sacrifice to save Earth?

Worldkiller-1 can no longer use Kara for his plans. Yet, seeing her memories, the villain realizes that Superman would be his perfect vessel. Later, Earth's yellow star revives the Lost Daughter of Krypton much to Worldkiller-1's surprise. Now, full of life and power, Kara Zor-El hurls the parasite into the flaming orb. With Worldkiller-1 now dead, Supergirl intends to ask Doctor Shay Veritas to help the Diasporans find a new homeworld. As one chapter in our heroine's life ends, another begins as she flies to Earth to make a life for herself.

Fairchild has destroyed some clones while Burnout, Rainmaker, Freefall, Grunge and Superboy deal with Kryptonians. It seems Kara's return to Earth will find her as "Doomed" as her cousin next month.

Story - 4: While this issue and the entire story arc was a fast and fun reading experience there are some things that prevent it from getting a perfect score. Firstly, it's not very reader friendly in spots. Much like the previous chapter, it uses references from other titles. There are some like myself who just haven't had the chance read them. This left me feeling a bit lost in certain points.

Now, I'm going to talk about the real elephant in the room. Kara's murderous and suicidal tendencies in this issue. one could get into debates about anyone from Superman's family, including the Man of Steel himself, killing until the cows come home. In fact, I myself have had discussions about the implications of Big Blue's possibly causing the death of the bad guys in the George Reeves episode "The Stolen Costume". Granted, Kara is not her cousin, and what she did to Worldkiller-1 and herself works for the comic. Yet, much like Smallvile and some of the Man of Steel film, part of me feels like the main character is being changed for the sake of the story instead of the protagonist learning from the events occurring. Let's hope that's not the case because Tony Bedard has done some fine writing on this book.

The epilogue in this issue seems to serve a purpose to tie Supergirl to the rest of "Superman: Doomed". That's all well and good, but it does interrupt the pacing of the book with the change in writers. Still, the entire package was entertaining, and I look forward to see what happens next.

Art - 5: The art was great and helped the overall book be so much more enjoyable. I could really find anything wrong with it. The battle at Earth's sun was especially well done.

Cover Art - 5: The writer that butchered prose fiction with The Da Vinci Code is now drawing comic covers. Oh, wait a minute. Sorry, Dan. That probably happens a lot. The art worked well to give readers a nail biting curiosity about what will happen in the comic.