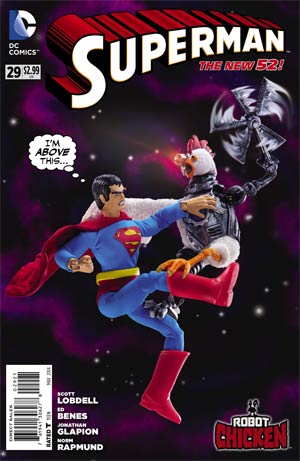 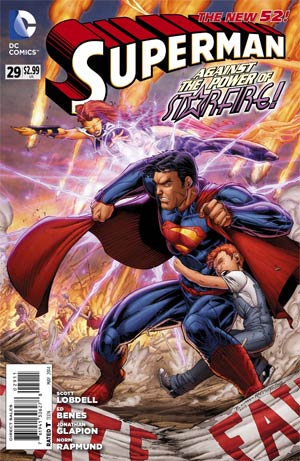 Click to enlarge
We pick up immediately after last issue with the arrival and attack of Starfire on Superman. The two superhumans rub one another up the wrong way and neither agrees to back down so Superman uses his freeze breath to hold the Princess while he checks on the prisoner he had wrapped in his cape.

A shock awaits him as the man has transformed into a disfigured 'deadling' creature. The creature laughs that Superman has had five years success as a hero but now the alien tech has given them the edge they need to take over. Starfire bursts free from her icy prison and incinerates the zombie creature.

The Princess reveals she knew the prisoner was a human husk hosting a Daemonite and had to kill it. Superman stands fast with his no kill policy. Starfire is also strong willed and points out the Daemonites had previously forced themselves upon a host taking their body over trying for millennia to take over Earth but it was always by force. This was the first time a human had voluntarily died to host Daemonites and Superman lets slip that there are many more Daemonite hybrids and a horrified Starfire races off to find them.

Meanwhile Morgan Edge follows Cat Grant home in his limo and asks again for Cat to reconsider selling up ClarkCatropolis.com. An upbeat Cat tells her former boss that she and Clark will not sell their popular blog site and Edge delivers a chilling threat before driving away.

Starfire arrives at the holding cells and inspects the weapons, discovering they are really daemonite DNA 'syringes'. The daemonites have escaped their cells and are attempting to kill their captors and escape. Superman of course arrives just in time to prevent Starfire from killing them all. As before Superman uses his freeze breath to stop all the prisoners and takes them to S.T.A.R labs.

Superman unfortunately is proved wrong with his theory of 'always finding another way' by the scientists at S.T.A.R who reveal that the daemonite DNA completely overtakes the humans with no way to ever change back. Starfire reveals the guns don't affect their alien biology. Superman is shocked to find that the guns are specifically made to target humans and examines the 'inoculation devices' and realizes it's also a tracking device emitting a subatomic signal he can reverse track. He offers a now calmer Starfire the chance to join him.

The duo bond a little on the way as Superman reveals he has learnt much galactic history including that of Tamaran. As they discover the hideout and enter they find a crate of weapons missing the exact amount they recovered from the prisoners. Also there is a small boy who asks for Superman's help. Koriand'r pleads with him not to trust the boy because he is using Superman's trust against him. Superman refuses to listen and is again proved wrong as the boy transforms.

The Daemonite backs up the Princess and even mocks Superman for refusing to join their master when he had offered [back in "Superman Annual #1"]. The heroes prepare for a fight but the Daemonite kills itself to avoid the fight. Superman is surprised and puzzled by the encounter. Why lure them to their base only to kill itself? Starfire slaps her forehead at Kal's gullibility - this was never about a trap or domination it was to put them on notice of an impending threat.

Elsewhere in Metropolis, Jonathon Carroll arrives home to find Lois talking to herself. Upon confronting her he finds her alone and voices his concerns over recent events. Lois uses her telepathy to make him forget the events of the Parasite attack and calm down.

In space, Starfire's sister Blackfire is informed of the rogue Daemonites on Earth and their encounter with Superman and her sister. She brushes off her crew's information and in her private quarters seeks audience with Helspont via video transmission.

She blames the deaths of the rogue Daemonites on Superman, omitting the existence of her sister. Helspont is annoyed with the involvement of Superman in Daemonite business but he also wonders what scared his servants into trying this stunt in the first place.

Story - 5: A lot of the issue deals with the opposing characters of Koriand'r and Clark with plenty of great dialogue and iteration. The main plot isn't abandoned, but is instead used to fuel the character scenes.

Art - 5: Ed Benes delivers some fantastic artwork that enhances the overall storyline. The art team here is a great match!

Cover Art - 3: The cover looks great, but considering the interior story, I feel somehow they missed the opportunity to really push the 'versus' meeting of Starfire and Superman.

Variant Cover Art - 3: As with the other variants - cool cover but why for this book?. No really, and what is its significance except for being quirky?