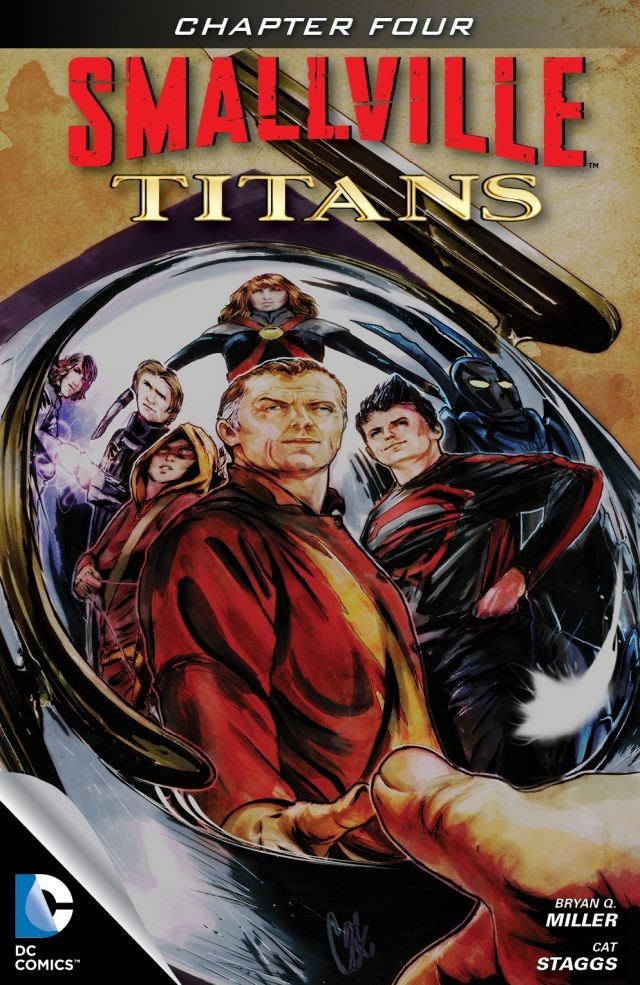 Click to enlarge
The Titans take the battle to Ravager while Jaime (Blue Beetle) and Jayna (Wonder Twin) tend to the severely wounded Zan (the other Wonder Twin). Until now, Ravager has enjoyed the upper hand; however, Conner (Superboy) and Mia (Speedy) work together, combining their abilities, to end her assault with some telekenesis-controlled arrows.

Not to be outdone, Ravager reveals a "dead man's switch" she's been carrying, which will detonate a bomb attached to Jaime if she's killed. Conner tells her the Titans don't kill, but they won't let her just walk away. The standoff ends when authorities arrive and take Ravager into custody, moments before a tyrannosaur crashes through a nearby wall. Before the authorities can panic (as anyone probably would if a tyrannosaur crashed through a wall in front of them), the Titans rush to the animal's side and say it's with them. After all, it's just the Wonder Twins - Jayna, to be precise, with Zan and Jaime catching a ride.

Afterward, Superman meets Superboy for a friendly "You did good, kid" chat. The guys catch up on current events, and Superman says after an upcoming meeting he has with the President, the way people look at the "S" on their chests is going to change.

Story - 5: This story was definitely one of the better "Season 11 Specials" that this series has had thus far, and I definitely enjoyed it!

I was very glad to hear that Ravager hasn't actually killed anyone during her battles, which means that Stargirl and the Angel of Vengeance (who I really hope we'll see again) are still alive, though only Stargirl is mentioned to be alive.

I very much like how Superboy is written here. Much like Post-Crisis Superboy (when he joined the Teen Titans anyway), he's very heroic, self-less, and will sacrifice himself for his friends, even to the point or threat of death. I also like the parallels between Connor here and Clark from the earlier seasons of Smallville. Connor tries to talk down his enemies while fighting them and has an unexplained hope for his enemy, even when he has no reason to think they'd be anything but evil. I also love how Connor mentions that the "S", the symbol of the House of El, means "hope"; clearly a reference to Man of Steel.

Now, I was a little sad that we didn't see Oliver "Green Arrow" Queen in this chapter because it's referenced in "Alien" that he was involved, or that at least Queen Industry (almost called it Queen Consolidated for a second there... Been watching too much Arrow!), in the clean-up of the Titans' island. But either way, I was happy to see Clark as he made an appearance after his battle alongside Diana against Hades and before his meeting with the President. Meaning "Titans" takes place sometime during the battle in D.C. in "Olympus," but before Superman is ousted as a Kryptonian in "Alien". I'm glad we finally get a time-fame to put this story into.

The idea to turn Zan into ice was genius as it makes perfect sense. I honestly never even considered that as an option and I'm glad that Jamie was level-headed during this ordeal, unlike Jayna. Which by the way, how awesome was it to see Jayna turn into a purple dinosaur? Some may think it was a little much, but I thought it was fantastic! Even though it's something the show itself would have never had the budget to do, it's very cool to see that now that this comic doesn't have to worry about a budget that BQM is going to go full-out with the Smallville universe.

Another thing I really liked was that every character had a role in this story. Connor was the distraction and the one who defeated the villain, without Mia's arrows Connor wouldn't have defeated Rose, M'gann kept everyone in contact, Jay brought the D.E.O. agents, Jamie figured out how to save Zan, and Jayna helped save Zan! One of the things that always has bugged me about team books like Teen Titans, Justice League, JSA, Avengers, X-Men, etc., is that there's always some character(s) who has nothing to do. In this story, everyone had a purpose and I loved it.

Unfortunately, this is the part where I have to say goodbye. A while back when Marc Pritchard and I were talking, we both decided that we were going to leave the Smallville books in terms of our reviews (I'm still going to be reading the series and I'm sure Marc will as well) as Marc is busy with Superman Unchained and I'm now on Justice League and Batman/Superman. Since the Smallville: Season 11 book ended with digital issue #69, Marc has been "relieved of his duties". I now am also going to hand the Smallville: Season 11 Specials title over to Matt Schorr, who is currently doing the main stories every week as well (Smallville: Alien). That being said, I enjoyed my time reviewing this book, but it has since become a hassle for me to take time to review Smallville while still having to review both Justice League & Batman/Superman, help manage a podcast, be an editor on another site, and still have a personal life as well. That all being said, I bid Smallville adieu and I hope to continue whatever story Bryan Q. Miller writes next!

Note: Smallville: Titans will go on sale in print form next month under the Smallville: Season 11 Special #4 title.

Art - 5: Can Cat Staggs draw the Titans or what? Love her artwork, only good to report in this department!

Story - 4: I'll be honest, I had to reread this one several times to figure out the T-Rex bit, and I'm still scratching my head over it. The preceding conversation is all about Zan turning into ice in order to prevent bleeding to death, and then...T-REX! I finally figured out Jayna became the T-Rex, and Zan was riding on her back. I guess that's how they planned on going into battle. Teenagers, these days.

This was an action issue, the payoff for all the buildup, and (apart from the weird T-Rex part) it pays off well. Conner and Mia working together was cool. I grinned at that one. And the meeting between Conner and Clark in the epilogue was a nice touch. If I have any disappointments, I wish we could've seen more of the other Titans lending a hand in the battle. Like, I don't know, letting the T-Rex deliver a nice punt kick to Ravager?

(Seriously, that T-Rex bit is bugging me. Can you tell?)

This miniseries was a nice addition to the Smallville mythos. I hope it's a sign of more to come. Maybe we can see a Smallville version of the Green Lantern Corps sometime? Maybe re-form the Justice Society? Or, hey, feel free to bring back Batman, that series was awesome.

Not only does Miller do a nice job of blending Smallville characters with classic DC ones, Staggs also does a nice job of rendering their appearances and costumes for the Smallville universe. While on TV, Smallville was all about modernizing the looks and motivations of classic DC characters. Miller and Staggs are effectively carrying on that tradition in the comics. I can easily imagine these characters appearing in the television show (the ones who haven't already).

Cover Art - 4: Michael already gave his two cents in Chapter 1, but I'll add mine anyway. Solid cover art. The only reason I'm not giving it a 5, like he did, is because I wasn't completely blown away. I reserve the right to award the highest ratings to the stuff that I think really stands out.

But it's good. The reflection of the characters on the classic helmet is a great image to sell the story inside.