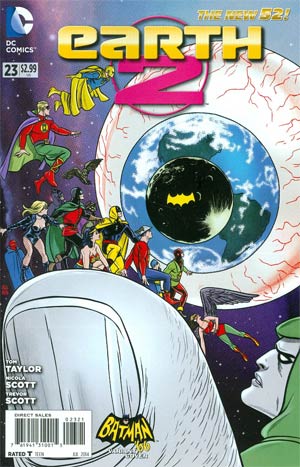 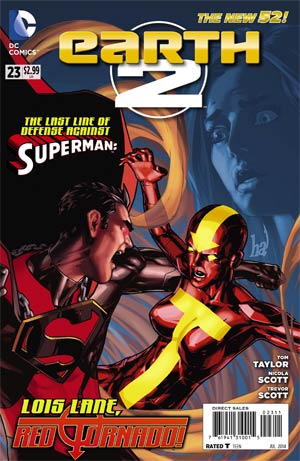 Click to enlarge
Brutaal discovers that Red Tornado is Lois Lane. He releases his hold on Val-Zod. Lois is then attacked by parademons, and Brutaal returns their attack, only for Lois to gently admonish him, that "Superman doesn't kill". Brutaal considers that the appearance of Lois is a trick, but quickly puts the notion aside for the opportunity to talk with her. Parademons swarm at Val and Hawkgirl, and Val shields Hawkgirl from their onslaught, but refuses to kill. Fortunately, Green Lantern arrives in time to save them, and they retreat to the Batcave, but are soon beset upon by a warhound. The heroes retreat again, with Green Lantern and Hawkgirl covering their escape. Meanwhile, Brutaal take Lois to see his parents, Ma and Pa Kent, who are still alive.

Story - 3: It's never good when an issue leaves a reader with more questions leaving than when he came in, and this installment does that in spades. What is worse is that the questions all revolve around Brutaal and how much of Superman is still there. Initially it was believed that Superman had been made completely into Darkseid's thrall. The advent of Lois Lane would, naturally, provide for some dramatic tension, but from what had been displayed, Superman appeared to have been extirpated unequivocally. This issue puts that assumption in a perilous place for questioning. In addition, Val-Zod's connection with Lois Lane is growing more interesting, and Green Lantern's abilities appear to be augmented somewhat. It's not a terrible issue by any means, but it's meandering and taking the long road to a conclusion that is all but certain. The Earth 2 heroes have to win, and Darkseid's forces have to be repulsed for good this time, but we should be in the endgame by now, and not the second act.

It seems that Val-Zod has fallen in love with Lois Lane. It's not a statement that's being made lightly either. His defense of her is beyond admirable, and the long look he's afforded in an extra panel is pretty telling. Lois comes between Brutaal and Val almost as if they were jealous rivals for her hand. Is it possible? Val has spent the majority of his life away from the world and real life experiences. It's far from impossible that he's grown connected to Lois in an accelerated fashion, much as the rest of his life has been accelerated as well. If true, it speaks to Val's noble nature to recognize what makes Lois Lane unique out of a planet full of people, and also the recurring motif that Superman and Lois Lane are to be together. If Val isn't poised to be the next Superman, I don't know who is. He's one sun-dip away from saving the world... with a wee bit of help from Green Lantern and company. Val's determination not to kill is both refreshing and confounding. It's great to see the core of Superman slowly evolve in Val, but at this point in the story, is it feasible and why the need to have Val not be a killer is telling.

Green Lantern's return from the dead seems to have made him a stronger, more determined hero. That being said, unless the Green has made him significantly stronger, it doesn't mean very much. It doesn't seem that Green Lantern will be Brutaal's match when and if hey meet again. As his powers are connected to the Earth, the same that is beleaguered by Apokolips, the power allotted Green Lantern is at best, divided. It's likely that while he'll make a good show, the result will be the same as earlier without support from Val. It would be inviting to see what changes being reborn have been afforded to GL, and see his power unleashed in a very demonstrative manner. Aside of that, Green Lantern is back because traditionally he's the leader of the JSA.

Superman doesn't kill. It's become schizophrenic at this point, as Superman is killing left and right these says. However, taken in the context of the Earth 2 story, it would seem that this aspect of Superman's core was intact until his abduction by Apokolips, and something that he still adheres to as he tells Lois, "You weren't supposed to see me like this". It's an acknowledgement that he knows what he's doing and it's wrong. Did he acquiesce due to Lois's death? Is this to be taken some other way? Did he plan on subjugating the whole world, but putting his folks somewhere safe? When Brutaal shows up at the Kents, it's a hideously effective way of reminding the reader of what Lois and he have become. Shells that house the deceased; Robert Kirkman couldn't have done a better job at reanimating these cadavers.

This was an exhausting issue, but solely because of the kill question. It's a core issue that DC should resolve with finality. Brutaal kills because he's no longer Superman, but Val-Zod is willing to die before doing so. If one displays heroism of the highest order, and the other base evil, why is the question of Superman killing still a question? No one has a problem with Superman killing, but no one wants to see him do it either. Perhaps in the pages of Earth 2 this dementia praecox can finally be resolved.

Art - 4: Top panel of the month? Page four, panel three: the scars look like tears, and convey remorse on the part of a most evil being.

Cover Art - 1: Why can't the cover actually portray what's inside? The misdirection is unnecessary.

Variant Cover Art - 3: The likeness of Henry Cavill on an evil Superman. Exhausting.