"This amazing stranger from the planet Krypton - the Man of Steel, Superman! Possessing remarkable physical strength, Superman fights a neverending battle for Truth and Justice, disguised as a mild-mannered newspaper reporter, Clark Kent." 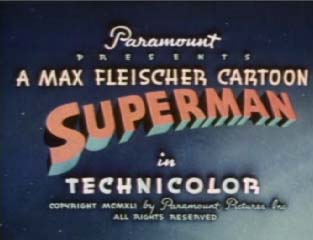 You can watch all seven "Super Mouse" cartoons at the Big Cartoon DataBase (registration required).

Super Rabbit
First Aired: April 3, 1943
In 1943 Warner Bros. released a Bugs Bunny cartoon "Super Rabbit" as a parody of the Fleischer series. Special carrots make Bugs into a superhero. The first villain he goes up against is Cottontail Smith who is a mad and evil Texas rabbit. Unfortunately, little by little, Bugs' powers start to wear off.

She-Sick Sailors
First Aired: December 8, 1944
In 1944 Paramount released a Popeye cartoon titled "She-Sick Sailors" in which Olive is more interested in her Superman comic book than in Popeye. Bluto overhears this and dresses as Superman.

A Hatful of Dreams
First Released: July 6, 1945
In 1945 Paramount released a Puppetoon titled "A Hatful of Dreams" by George Pal in which a young boy becomes Superman thanks to a magic hat.

Super Lulu
First Aired: November 21, 1947
In 1947 Paramount released a Little Lulu cartoon titled "Super Lulu" in which Lulu dreams of being a superhero, much to her father's anger.

Stupor Duck
First Aired: July 7, 1956
In 1956 Warner Bros. released another Superman parody, this time using Daffy Duck in the cartoon "Stupor Duck". In this parody of Superman, Daffy is "Cluck Trent," a mild-mannered reporter at a major metropolitan daily newspaper, Cluck takes a mild-mannered pill and hears something from the editor's office. The editor is watching a crime drama about Aardvark Ratnik, a fictional mad Russian villain who threatens to "blow up everything" in his hell-bent scheme for world domination. Believing that Aardvark is an actual villain who has announced his plans to the editor, Daffy becomes Stupor Duck, set to foil Aardvark Ratnik's schemes. He searches for the putative villain. One by one, he spots "examples" of Aardvark's supposed work: a skyscraper being razed to make way for a new city hall; a train wreck that's actually a stunt for a new Warner's movie; a sinking ship that turns out to be a submarine; and a nuclear missile that's actually a rocket headed for the moon (with Cluck/Daffy holding on for dear life).