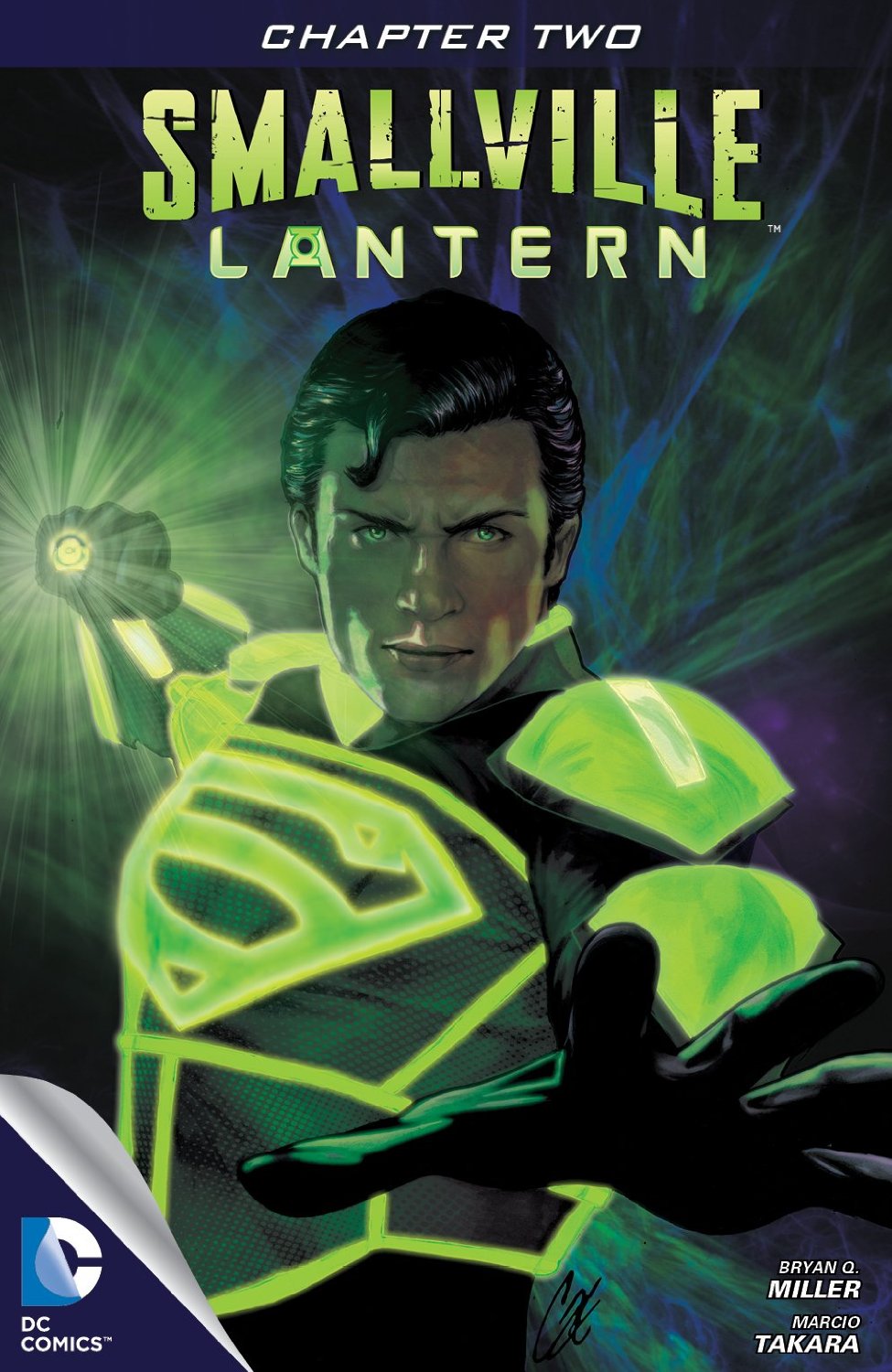 Click to enlarge
Police chase a runway criminal through the streets of New York City. One detective follows him into a dark alley, and moments later, a giant green fist punches the man back into the open. When asked what in the world that was, the detective - Detective Stewart - says he has no idea.

A device that other police assume is a strange cell phone begins signaling him, and Stewart retreats to a secluded area where he can freely converse with someone named Salaak via his own power ring, just like the one Clark Kent received last issue. He's told he'll be needed to help train a new recruit in his sector.

In the meantime, Clark is attempting to be rid of the ring. Heat vision, Arctic breath, even super-powered fastball pitches aren't able to destroy it. He suddenly overhears a police standoff with a group of heavily armed criminals and rushes to assist, with near catastrophic results. Superman unwittingly launches green missiles and a giant green version of himself at the men, who naturally surrender for fear of whatever the new mean green Man of Steel might throw at them next.

Superman apologizes to the police and insists he'll help clean up the mess as soon as he has his "new skill set" under control. He flies from the scene and meets Detective Stewart, now adorned in his own Green Lantern garb, in the sky. Stewart tells him they need to talk.

Story - 3: So far, this is pretty solid story-telling. It's not knocking my socks off or anything, but it's engaging and offering a perspective on characters we haven't seen before.

Clark's first reaction to the ring as a nuisance makes perfect sense. This version of our hero has no prior experience with a Green Lantern ring. He's not aware that it was created to be a force for good, and his lack of understanding on how to use it gets in the way of his responsibilities as Superman. In the past, Green Lantern rings were incapable of causing fatal injury. We have no way of knowing if that's the case here, nor does Superman. So his horror at seeing green missiles aimed at a group of men on the ground is understandable.

Toward the end of the story, it seems Clark/Superman has accepted that he can't rid himself of this ring, at least for now. So he's hoping to learn how the thing works in order to, at the very least, not hurt anyone with it. Smart thinking. And it fits with Superman's mentality.

Detective Stewart is the enigma, and he has the potential to be a problem for this story in my eyes. (Hence, the 3.) He isn't yet, but as the story progresses that could change. Allow me to explain...

First, let me say I'm actually thrilled to see John Stewart here. I actually smiled when I saw it was him. I know Hal Jordan is THE Green Lantern for most people, but I always preferred Stewart. So the fact that it's Stewart rather than Jordan isn't what I see as a potential problem.

Here's the thing... In this issue, we're given to understand that Stewart is keeping his ring-slinging status a secret, and he has for quite some time. That would be fair enough if this were Smallville Season 1 through 6... maybe even 7 or 8. But this story comes after the following events (just to name a few):

- Dark Thursday: When Lex Luthor, possessed by the spirit of General Zod, ravaged most of Metropolis.

- The introduction of Green Arrow: Metropolis learns it has its own vigilante superhero defending the population from criminals.

- The introduction of the Blur: Metropolis learns of a super-powered hero protecting its citizens from criminals and disasters.

- The formation of the Justice League: Granted, they were mostly covert operations, but plenty of people (like, say, police investigators?) were aware of its existence to some degree.

- Apokolips: The end of the world, when a planet-size destruction device was on a collision course with earth, and a Superman was called upon to save the day.

- Olympus: When a god of war attacked Washington, D.C.

- Alien: When creatures from an alternate dimension tried to destroy the earth.

You may ask, so what? Why would that be a problem?

Well, here's my question: When did Detective Stewart join the Green Lantern Corps? During Season 1? Season 4? Or Season 10? Or even 11? Basically, if it's any time before the last few months, it begs the following question: Where the heck have you been, Stewart?!?

When Ares was smashing up Washington, why didn't you lend a hand? Too busy punching out muggers with King Kong-sized fists?

What about when Apokolips was about to destroy the planet? Were the Oans too busy to notice?

And why are you working undercover like this? Quite frankly, with so many superheroes operating out in the open, not to mention the dismissal of the Vigilante Registration Act, why haven't we heard about you before now? Where have you been hiding? With all that's happened, it seems that you or the Oans might've thought to get involved somehow.

You might say, what about Batman? Why wasn't he involved before his introduction? Batman isn't exactly equipped to handle a planet-sized catastrophe like Apokolips, but Detective Stewart would be.

Like I said, I'm glad to see John Stewart. I just think introducing him as an experienced Green Lantern at this point in the Smallville mythos presents a problem. We'll see if Miller can prove me wrong...

This is purely a matter of taste, and I know there are many who probably really enjoy this style. But it's just not for me. In my eyes, the lack of detail, the simplified, almost casual designs of the characters just come across as lazy.

I'm sure that isn't the case. No doubt Takara spent many hours on these panels. It just isn't for me.

I'll leave it at that. Anything else would just be rehashing what I've said before and attempting to justify why I feel that way.