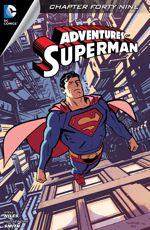 Click to enlarge
As Superman flies towards the opening ceremony of Clavius Moonbase 13, he reminisces about his boyhood. Turns out, young Clark Kent once believed in ghosts.

As Superman lands on the base, he is greeted by the cheering crowd. The mayor of said mood-base introduces our hero, and Superman waxes poetics about now being able to see what Earth really looks like from the moon. Earth, Superman declares, is a most amazing place.

But Kryptonian ghosts, buried deep under the moon's crust, are not happy about Superman's love of Earth. Their purpose in traveling to Earth was to conquer it, not cherish it. Apparently the moon got in their way.

These ghosts label Kal-El of Krypton a 'traitor' and begin attacking the base. At first, Superman is helpless against the ghosts. They punch him, but he cannot return the favor. They mock him and try to make him think that he is going crazy.

But Clark Kent remembers the words of Pa Kent...

"There are only two places ghosts can live, your head and your heart. You give them power. Ghosts are within us, and we say when they come and when they don't."

A young Clark didn't understand Pa Kent's wise words, but an older Clark/Superman does. The Kryptonian ghost soon looses his power to hurt The Man of Steel. He can no longer punch or fight him. But instead, the ghost begs Kal-El not to ignore him. So, Superman tunnels through the moon and finds the body of the dead Kryptonian. The dead Kryptonian simply did not want to be forgotten.

As Superman lifts off the moon, he promises to take the Kryptonian home.

Story - 3: The Good: This is a nice one shot story. And as much as I like a good Superman 'action' story, I also like that Niles uses Superman's intelligence to solve the problem. The ghost tells Kal-El that he can't 'punch' his way out of this situation. So, Superman finds another way. He remembers the wisdom of his Earth parents. The wisdom of the Kents is important to the Superman lore, and I always appreciate it when they are brought up.

Superman's compassionate nature shines through. The Kryptonian ghost is at first a villain, but after he is defeated, he begs for mercy, and Superman is gracious enough to give mercy. Superman's purpose is to defend, not conquer.

I like that Clavius Moonbase 13 is a private enterprise. The way things are going in America today, it seems that that is the only way we are going to be able to go back to the moon. It gives me a little hope that Niles and editor Alex Antone don't seem to have a problem with this idea. It's also awesome that Superman seems to approve of such human expansion.

The Bad: There's not much bad about this story. I would have liked to have known more about the Kryptonian ghost. Did he have a family? Was he a scientist? A politician? What was his name? But even without knowing the answers, the reader connects and sympathizes with the him... in the end.

Art - 2: I wasn't impressed with Smith's art in this issue. At first, I mistook his drawing of Earth for the moon. The Superman close-ups were okay but not extraordinary. His body is a little too 'lanky'. The muted colors usually don't bother me, but with everything else, the colors were just a little too washed out for me.

Cover Art - 3: Wasn't this cover used for Adventures of Superman #42? I'm guessing that they are going to use this cover on AOS one shot stories. It's a nice cover, but it would have been nice to see something new.