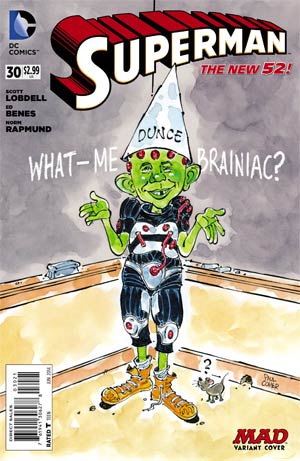 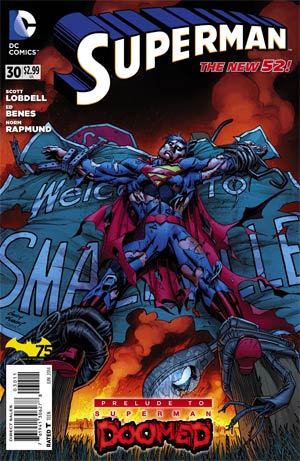 "All Good Things Must End

Click to enlarge
In the Bahamas a loving couple on their honeymoon are frolicking in the sea when one is stung by a sharp but beautiful ivory type stone. They smile and decide to use the stone to forge new wedding rings but water surrounding them begins to boil ferociously and suddenly they are gone.

Elsewhere in Smallville the government and STAR Labs have taken up residence to find clues as to why the entire town has fallen into a simultaneous coma. Senator Sam Lane is no stranger to Smallville and its history but when questioned even he draws a blank as to what has happened. Superman arrives and at Senator Lane's suggestion scans the town for clues. Superman finds nothing, the townsfolk are perfectly healthy, just all comatose. Lane mentions odd crop circles in the surrounding fields and Superman races to investigate.

He finds the word 'DOOM' spelt out in the fields in Kryptonian text and finds someone alive hiding in a grain silo. Speeding inside he finds his powers failing and meets a foe Kon-El encountered (in 'Return to Krypton') The Eradicator. Eradicators usually appear when a planet is dying to aid its end but for some reason he has been hiding on Earth. He warns that if Earth was to die a natural death its own Eradicator would have manifested instead he reveals that he had been waiting to warn Superman that Earth will be murdered.

Superman asks if it is Doomsday that will kill Earth but the Eradicator angrily punches Superman into orbit and growls that Superman will be the one to kill the Earth. With the Eradicator vanishing Superman contacts Cyborg and asks him to check into things from JL Headquarters while he flies back to Earth. Back in Metropolis, Lois is back at PGN after her recent hospital stay. Perry scowls that Lois is not on the beat and she psionically knocks him out sending her mind across space, there she meets up with her new husband, Brainiac!

Clark calls in sick to Cat to cover his absence from blogging on clarkcatropolis.com and tries using the Fortress equipment to find if Doomsday is causing problems. While preoccupied he doesn't notice that the bottle city of Kandor's comatose citizens wake up and begin pounding on the glass walls.

Cyborg reports back to Superman that while scanning for Doomsday he has found that the Bahamas has been completely destroyed.

Story - 2: The problem at the core is that this could have been a brilliant issue, but the threads that have been woven over time seem to have become muddled and result in a dire offering.

After reading the introduction and enduring four pages wasted on padding we get into the 'story' and a swiss cheese mess. I say 'story' for a lack of a better word. It flows, yes, and has all the elements but it's very disjointed and to that end, very frustrating. Let's start with the honeymooning couple... why? For what purpose do we focus on them for four pages? The final page served more than enough punch and told the whole situation without waffling on about Jane and Alistair. Next Superman flying to Smallville and NOT seeing the 'crop circles' on his way in - I could forgive it but would he really have missed giant crop circles written in Kryptonian? Then meeting The Eradicator... It was Kon-El and young Kara in the distant past - NOT Kal-El but the Eradicator swiftly name checks him as both Kal and Superman, he also travels for YEARS and in all the universe picks the same planet as Jor-El to live on and doesn't contact Clark at all until now? Instead hiding in a grain silo waiting seven years till he can warn Superman that he will murder his adopted planet and then he vanishes - give me a break (and wait till you read Teen Titans #30 because its just as full of bizarre coincidences).

Superman shrugs off almost dying from Kryptonite and meeting a being that foretells Superman will commit planetary and population murder to hunt for geological disturbances on his computer. At that same time Lois returns to the Daily Planet (is it PGN 'the network home of a newspaper on the brink of financial collapse' or the Daily Planet 'the most read newspaper in the world' editors please decide) and psionically contacts 'husband' Brainiac - say what? I get that Brainiac is returning, it's just the emotional connection he relates with the phrase 'bride'. Before I'm berated the monologue also says 'An unspeakable union...' Lois has been 100% in control of her free will until this very scene - perhaps some kind of dialogue, a headache or a monologue box to say she was now taken control of and is a puppet of Brainiac would have served better?

By the way, Jimmy is still a billionaire, I know he has moved in with Clark to keep 'rooted to reality' but he's still a gopher at PGN? Honestly? This a personal niggle but I just don't buy him taking continual flack from Perry. Especially as in current continuity Jimmy and Perry don't have the bond they did pre New 52 - but hey ho. The only things that worked this issue and could have been streamlined are as follows: Superman arrives in Smallville to investigate, he discovers everyone in a coma, he doesn't notice Kandor waking up, scans the planet from the Fortress with Vic's help and discovers Doomsday has destroyed the Bahamas - so the question is - why did it get so messy along the way?

Art - 4: The art is beautifully rendered throughout. With rare scenes of actual action this issue the art offers a dynamic force of life that makes it interesting. If there is one thing I would pick out it's Senator Sam Lane. He suddenly looks very young and muscular compared to recent issues - in fact comparing the art to the scenes with Lois he hardly looks like he could be her father. Aside from this, the art really shone where the writing didn't.

Cover Art - 4: This cover is great! However it's like a tease. Did Doomsday do this? How does it relate to a town asleep? It raised lots of questions that I eagerly hoped would be answered inside but... weren't...