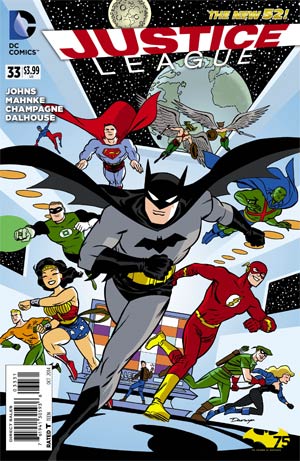 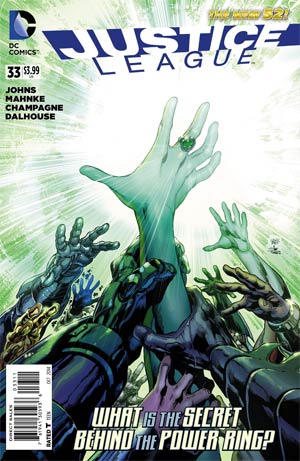 Scheduled to arrive in stores: September 3, 2014 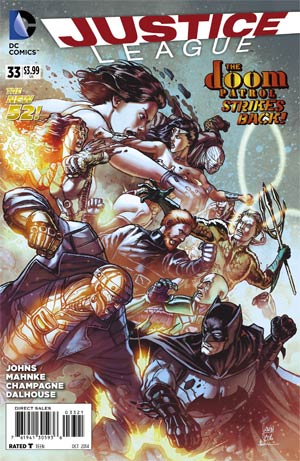 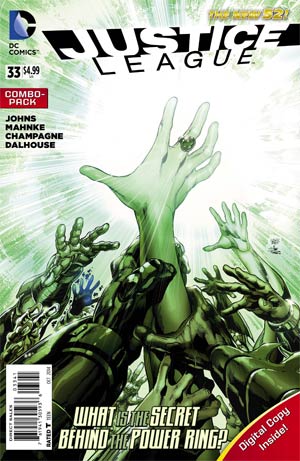 This issue begins where the last left off, Lex Luthor holding the Chief while the League fights off the rest of the Doom Patrol. This continues until Jessica Cruz wakes up and the Power Ring takes over, taking down everyone in a giant green blast, of which the Anti-Monitor sees.

When everyone wakes up, Batman confronts Lex and asks him why he is here, to which Lex tells him to keep the Doom Patrol away so he can confront Jessica. As Lex approached her, he electro-shocked her unconscious and planned to remove her ring. Before he could do this, the Chief returned, took out Lex's armor, and planned to cut Jessica open. Lex fires an energy blast at the Chief, but Batman quickly saves him from the attack. Volthoom, the entity within the power ring, then reminds Jessica that people only want to hurt her.

Batman then confronts Jessica and shares with her his pain over the loss of his parents and tells her that she too can overcome and fight the darkness. Batman then helps Jessica overcome Volthoom, which results in her changing back from Power Ring into herself. After that, Shazam took Cyborg back to S.T.A.R. Labs to be fixed, Flash and Aquaman watched over Jessica in the Watchtower, and the Doom Patrol went back to A.R.G.U.S. Batman then meets with Superman and Wonder Woman in private to discuss allowing Luthor to join the League, and eventually, in order to keep their enemies closer, they grant him membership into the Justice League.

Story - 4: I give the story of this issue a solid 4. Not only does it wrap up this story arc involving Power Ring, but it also begins a new one with Lex Luthor as a member of the League himself.

I'm still trying to get used to Lex Luthor playing a hero here, but I think it's going to be a really solid story to not only see Lex as one of the world's greatest heroes, but also to see what happens when he does inevitably betray the League, if in fact that is what happens. I really liked Superman's little monologue at the end of the issue about how when he first appeared in Metropolis, how corrupt and just evil Lex Luthor was. We Superman fans know this from his appearances in Action Comics, Superman Unchained, and Lobdell's Superman run, as well as even Forever Evil to an extent, however here in Justice League all we see him wanting to do is help and be a part of the League.

I think most of us can all agree that Lex Luthor is Superman's greatest enemy. Over General Zod, over Brainiac, over Bizarro, over Metallo, over Doomsday, and others, Lex Luthor has always been the biggest thorn in Superman's side and has been a part of every interpretation of the character in one way or another. I really enjoy his interactions with Batman in this book and I think we're going to continue to see that throughout, but I'm also hoping that we'll see him and Superman team-up or at least interact in some capacity.

From what we saw at the beginning of Justice League #30 and from where this book seems to be headed, Shazam has taken Green Lantern's place, and Flash and Superman are about to be booted out for Captain Cold and Lex Luthor. I'm interested to see how and/or why this takes place, and quite honestly I hope this doesn't mean that Superman and Flash (as well as Hal Jordan, come on Johns, bring back GL to JL!!!) are out of the picture for too long, because I think they're extremely valuable members to the League, but we'll see where that goes.

As for going back to this issue, the one thing I was pretty underwhelmed about was the League's interaction with Element Woman. Flash and Wonder Woman do interact with and let her know that they have been looking for her, but that didn't go anywhere. Also, I really hate this interpretation of the Chief. Not in the sense that he's not a good character, he is, but we're meant to dislike him, whether or not what Lex said was in fact true.

My favorite part of the issue, and all you Dark Knight Haters can roll your eyes all you want, was Batman saving the day. Honestly though, there was not a better character to talk down Jessica Cruz from the Power Ring's control than Batman. Although every member of the League has experienced loss, we all know that Batman has suffered the most. Some may argue that Superman has, but I do have to disagree simply because not only did Batman loose his parents, but he also recently lost his son (the current League is guesting within the Batman & Robin book as well if you guys would like more adventures with this team, it's a great read!). Coming from one person's loss to another really made this issue especially memorable for fans of Batman as well as this Justice League series. To be frank with you guys, I'm just happy that the League's back and that the Forever Evil tie-ins are over!

Art - 5: The art in this book was superb. I really enjoy the way Mahnke draws the League as well as Luthor and the Doom Patrol as it really enhanced the story. The best panel was that of Batman hugging a de-powered Jessica Cruz, that was beautiful and really reminded me of Batman's story with Ace of the Royal Flush Gang from the Justice League Unlimited episode "Epilogue".

Cover Art - 4: This is a pretty accurate representation of the story if I do say-so myself!

Variant Cover Art - 4: This one was also really good and accurately portrayed the events of this issue. Missed Superman and The Flash though...

Batman 75 Variant Cover Art - 5: I LOVE this cover! Honestly, not only is Cooke one of the best artists in the business (DC: The New Frontier and Before Watchmen: Minutemen are some of his best) but he also proudly displays the most classic and probably one of my favorite interpretations of the Justice League of America on this cover. From including the Original Seven (with Martian Manhunter, yes!), Green Arrow, the Hawks, Black Canary, the Atom, and even Snapper Carr, to the Trouble Alert in the background, this variant cover is one of the best I've seen in a long time!