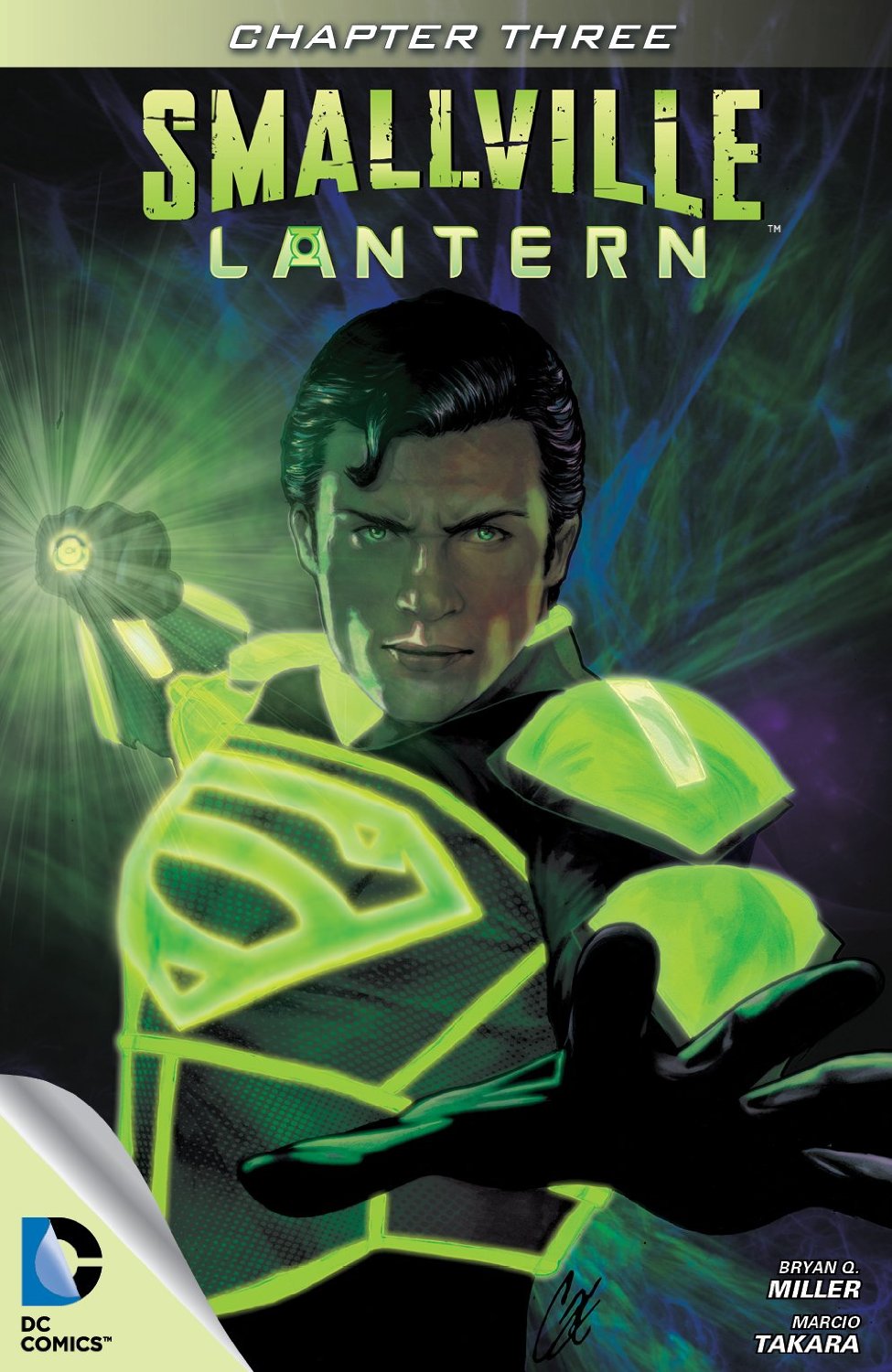 Click to enlarge
Oliver Queen has arrived at the scene of the armed robbery Superman thwarted last issue. In addition to being a little miffed Superman has gone green - that's Ollie's color - he's also wondering why these criminals decided to rob this bank sporting some really heavy duty hardware.

Meanwhile, in an undisclosed warehouse, Prometheus is introduced to the Smallville universe. While apparently using homeless men for target practice, Prometheus discusses the fact that the crime in question was, in fact, just a distraction from something much bigger.

Elsewhere, Clark is receiving a crash course in Green Lantern history. Via a sentient program in the ring, Tomar Re gives a quick summary of previous events among the Lanterns of the Smallville universe.

The Guardians of Oa created the Green Lantern Corps as an elite force to patrol and protect the cosmos. However, the Corps was preceded by a legion of robots called Manhunters. Unfortunately, things went south when a cosmic entity called Parallax infested one of the Guardians and repurposed the Manhunters as weapons of fear. Thus, the Corps was created to fight them.

Earth's first Green Lantern, Hal Jordan, was possessed by Parallax, and he turned on his fellow Lanterns. The Parallax War that followed decimated the corps, leaving only a dozen or so Lanterns left.

Clark tells Tomar Re he's sworn to protect Earth and asks why one of the citizens of Argo can't accept the ring, since their existence is what caused the ring to seek a Kryptonian in the first place. John Stewart interrupts the conversation, ending the program, and explains that the ring chooses someone with the capacity for great will.

When pressed by Clark about why the Guardians, now apparently long dead, ever had the right to force people into service for them, Stewart simply says, "Orders are orders. And you're a soldier now."

Somewhere in space, buried within an asteroid circling a distant star, a mysterious voice awakens the Manhunters and sends them to hunt down the remaining Green Lanterns.

Story - 3: This is a tough one. I like this story. I really do. And if it weren't placed at this point in Smallville's timeline, all would be well. But it is, and thus, a lower score.

I'll start with the positives. In general, I like this introduction to the Green Lanterns, I think because it reminds me a little bit of The Last Starfighter, a beloved film gem from my childhood. Tomar Re is practically saying, "Greetings Lantern. You have been recruited by the Guardians to defend Sector 2813 against Parallax and the Manhunter armada."

(Older visitors to this sight should recognize that one.)

It's also interesting to see Prometheus - although using homeless men for target practice seems a bit over the top - and to learn that the criminals Superman stopped last issue weren't just a one-off group of bandits who existed just to showcase his new powers. The tweaked design of the Manhunters is also a nice touch.

Unfortunately, this all brings back my previous concern with the last issue. We've now learned that not only has John Stewart probably been in action on Earth for a while, but he's also nowhere near the first to do so. Hal Jordan, the first Lantern of Earth, is afforded a brief appearance in the Smallville universe as he's possessed by Parallax and slaughters most of the Green Lantern Corps.

All well and good. This is compelling backstory, and I suspect it will come into play later. But again, this suggests at least one Lantern has been in action on Earth during the last several years. Which again begs the question, when the planet was faced with global catastrophe more than once, where were they?

If Stewart just told Clark, "We like keeping a lower profile than you," that would explain a few things. After all, it's not like Stewart, Jordan, Raynor, Gardner, or anyone else absolutely has to don some tights and start patrolling the skies in plain view. But at the very least, someone in Smallville's Justice League should've crossed paths with them.

Whoever Stewart answers to in this story must've reprimanded him pretty hard for laying so low when a fire-spouting planet was about to collide with Earth. Where were you on that one, Poozer!?

Art - 3: I've said it before, so why not one more time? This style is just not for me. The Manhunters look cool and all. I've always thought past designs where they actually had faces seemed strange. But overall, I just don't like this minimalist style.

Also, this Clark/Superman bears almost no resemblance to Tom Welling. The same goes for other characters that appeared on the TV screen. That's a hard thing to maintain, I'll admit, but I would still like to see it happen.