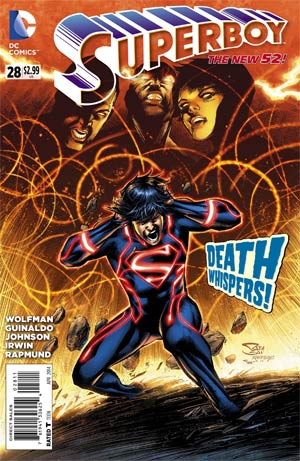 Harvest is met by a new superhero, a young man named Pacer. The villain realizes that he is slowly being overwhelmed as the number of superheroes begin to grow. He breaks Pacer's neck and, walking away from the corpse, vows to find his 'son' Jon in the time stream and force him to help his cause.

Red Robin interrupts a meditating Raven and asks her to join the other Titans to visit Superboy in the medical facility. At that same time Schiz elaborates on the backstory of how man came to rely on its super community and how eventually they began to rule over man. Man refused to become subservient and instead began searching the stars to find aliens to enlist in their war.

Mixing of alien and human DNA was a result of their hunt and the resulting children were like Schiz herself. The new metas proved incredibly powerful but Schiz for example proved to be so dangerously unstable that the project was 'put on ice' and the subjects were placed into stasis where they rest still.

With Superboy helping, Volt and Lodestone are soon freed, but as they were born in captivity away from man they needed time to acclimatize. Echo cops arrive but using all her might, Schiz is able to make the guards turn on one another. Superboy can't risk his plan beIng uncovered and so talks Schiz down and encourages her to follow his lead and the plan to create an army. To that end they rescue two new recruits Volt and Lodestone.

With their plan to find and use new meta recruits in motion he instructs Schiz to find shelter and hiding while he returns to hospital in order to trick the Titans into thinking he is still sick. He is able to get back to the hospital with only seconds to spare before the Titans arrive and he spins them a yarn about being on the mend and pretends to be worried about Bart's trial.

Later that night Lodestone, Volt and Schiz have gone into hiding in nearby cavern territory. The two 'newborn' men are now ready for action and as Superboy arrives he uses his powers to influence their thoughts, nudging them to agree to help him and his plan to have a meta army.

They attack the Echo military base using Schiz's power to disguise their mental imprint. This makes them project a display of them as resistance fighters. Using a guise as helpers of Bar Torr's cause they infiltrate the headquarters to find their weapons cache.

The teens succeed in killing the entire Echo force and steal their weapons to promptly teleport them to their cave hideout. They realize their actions here may well have caused a war between the superheroes and the metas. Superboy tells them that once the time stream is circumvented and repaired, the human race will realize that the only real heroes are standing up right now ready to fight for the cause of freedom.

Story - 3: After the bizarre misstep in continuity with Teen Titans we're back on track but this issue just felt like a retread, over explaining everything we knew but just wording it differently.

The only real scene that moved everything forward was the Harvest scene. It's a low score only because nothing really happens.

Art - 4: The art is brilliantly composed and inked. Some perspectives need some work for the future but overall it looks great.

Cover Art - 5: I know I whine a lot about the déjà vu style in the Superboy covers but this is great! I was surprised by it and think it is fantastic though I found myself expecting to see the trio manipulating Superboy to be the Legion of Superheroes; Saturn Girl, Lightning Lad and Cosmic Boy!