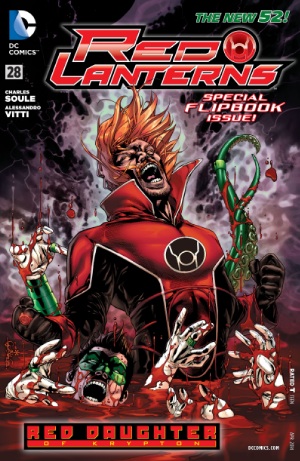 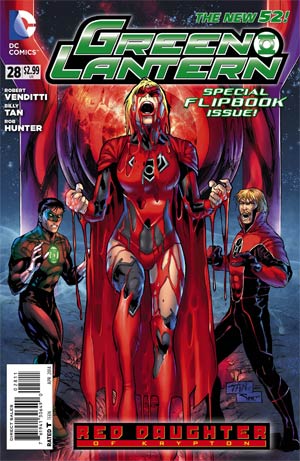 Scheduled to arrive in stores: February 5, 2014

Click to enlarge
Green Lanterns Barreer and Lok leave space sector 3014 to respond to a distress call from the corps when Red Lantern Supergirl attacks them. She nearly defeats them until she exhausts herself. Lok notes that red beams came from her eyes. Yet, he believes they are due to the ring's power. It isn't until he and Barreer get to sentient Green Lantern planet and new headquarters of the Green Lantern Corp Mogo that they learn the truth. After Hal Jordan swears in ex-convicts as new Green Lanterns, he scans Kara Zor-El and discovers she is Kryptonian. Now for his friend and ally Superman's sake, Hal wants to help the Lost Daughter of Krypton even if he may have his work cut out for him.

As Blue Lantern Saint Walker is trying to use hope to aid Kara, Hal Jordan must speak with Red Lantern leader Guy Gardner to learn of his intentions for Supergirl and future Red Lanterns. Recently, Hal promised the Red Lanterns a sector to patrol, but he has not decide which one. He may not have to for when Hal and other Green Lanterns arrive on Ysmault, home planet of the Red Lanterns in Hal's patrol zone of sector 2814, the welcome is not a warm one. Perimeter defenses around the red rings' power battery are activated as Gardner makes a declaration. Sector 2814 belongs to the Red Lanterns.

Story - 4: It almost got a perfect score, but I gave this a four because it isn't very reader friendly. I admit that I haven't had time to read the Green Lantern titles recently. A caption or page telling what happened in previous issues would have been nice as I felt a bit lost during the early scenes with Mogo and the new recruits. Aside from that, this was a great book to read. Plus it's nice to see how Kara's story continues.

Art - 4: I'm a Billy Tan fan, and the art isn't bad. Yet, Hal Jordan looks weird in some pages and panels. That really threw me off and deterred my enjoyment of the comic somewhat.

Cover Art - 4: The cover is a bit of a spoiler to what happens in the Red Lanterns half of the flip book, but it was classic Billy Tan and beautifully done.

Scheduled to arrive in stores: February 5, 2014

Click to enlarge
As Atrocitus punishes some Red Lanterns on the planet Groy for siding with Guy Gardner, Gardner himself and Ice must save alien Red Lanterns from the fascist Shadow Thief in Paris, France. They do so, and Guy wants to buy Tora dinner. She refuses leaving Gardner to reflect on things on the way to Ysmault, home planet of the Red Lanterns, where Green Lanterns are detected near the red rings' power battery. What could they want with Guy Gardner and his corps, and will they be forced into a battle they may not win?

Our story takes us to where Green Lantern #28 ended. Guy and the Red Lanterns are about to fight a turf war with Hal Jordan and the Green Lanterns until he see Red Lantern Kara Zor-El in a green energy cage. The combined forces of both the Green and Red Lanterns must force her into Ysmault's red lake when she escapes. Once Supergirl comes out of the crimson waters, she'll either calm down and be able to think, or she'll savagely pummel any Red or Green Lantern in her way.

Atrocitus continues to hunt traitors while Kara emerges from the red lake. She introduces herself, and both Guy Gardner and Hal Jordan know that they have a situation on their hands - one that may require the assistance and presence of Superman.

Story - 5: This is somewhat better than Green Lantern #28 as it has some really great character moments that I was expecting in the first part of "Red Alert" Let's hope that Kara's future appearances in this title are this good.

Art - 3: The art, while good, merely told the story. Nothing stands out like in most of what's been shown in Supergirl's adventures recently.

Cover Art - 3: The cover didn't grab me like most do. It was drawn well, but I question the choice of images as it doesn't feel connected to its counterpart in the flip book.