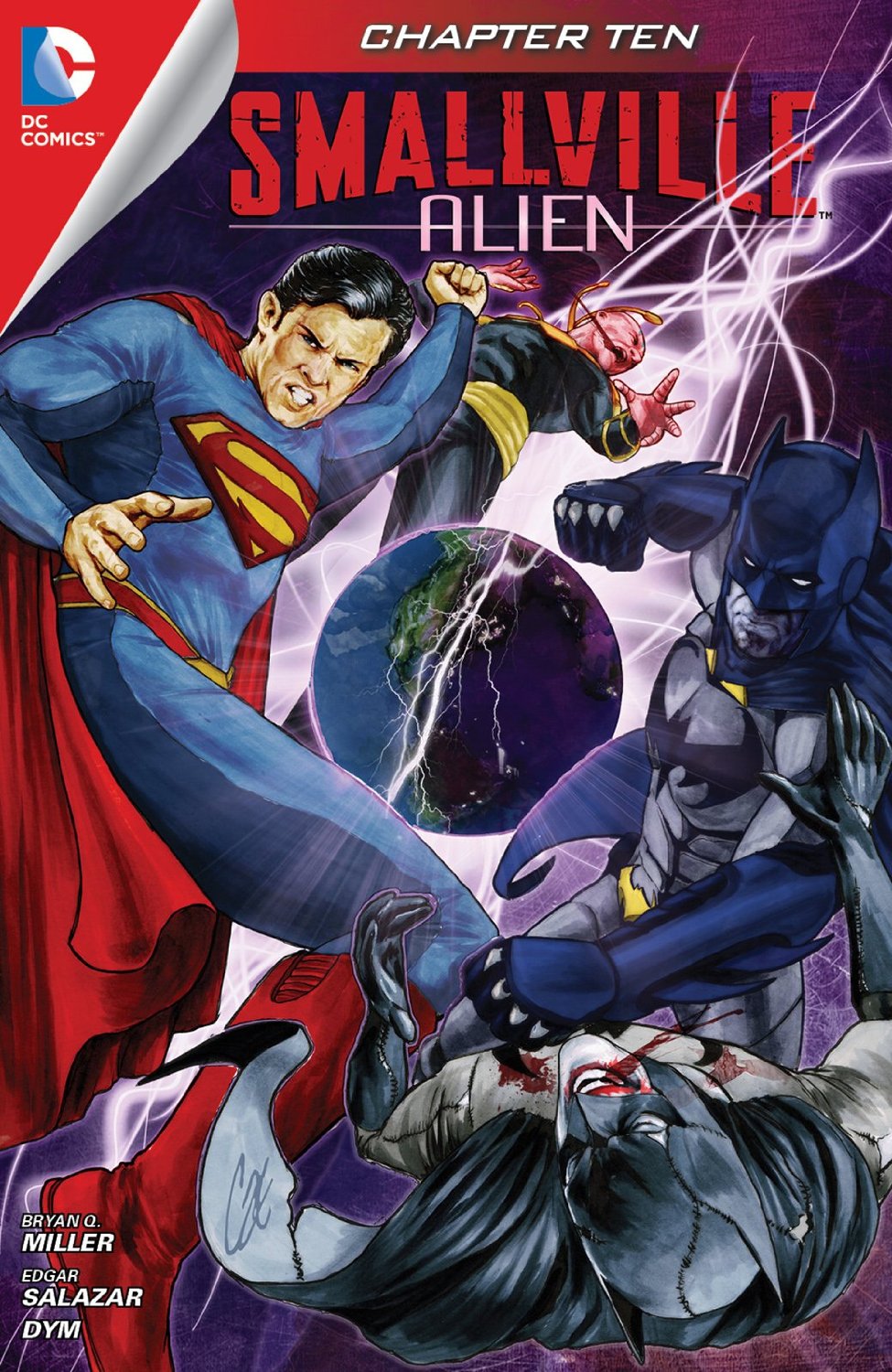 Click to enlarge
While puzzling over how Mr. Luthor would handle the current situation, Otis notices one of the Rocket Red Brigade suits.

In the meantime, Lex is about to catch and rescue Clark in the iced over lake at Chernobyl, but an energy blast sends the reporter out of Lex's reach. Thus, Lex returns to the surface and is plucked from the icy waters by the Monitor. The Monitor toys with Lex a while, telling him he plans to kill him before destroying this earth. However, he agrees to answer one question before killing his prey, and Lex asks what his connection is to Superman before passing out.

Superman enters the scene and tosses the Monitor as far as he can. He creates a ring of fire around Lex with his heat vision to keep him warm, then flies above the cloud cover to recharge in the sun. While there, he talks with Tess and Emil at Watchtower, who tell him the reason this Monitor has been able to hurt him without Kryptonite or red sunlight is because he comes from a different universe with a different set of natural laws. Bummer.

Superman refuses assistance from Supergirl and heads for the Monitor's ship, we can assume for the final confrontation.

Story - 4: I enjoyed this issue a lot. I even thought of granting it a 5, which would've been the series' first from me. It was so entertaining and engrossing, I almost did it. One thing kept me from doing it, however, and it's the same thing I've been demanding for the past few weeks.

Why are these Monitors doing this?

We still don't know. Only two issues are left in this story, and we still don't know. All we've been told is they decide when a universe is no longer useful, then do away with it. And I'm beginning to think that's all the explanation we're getting. Those last issues must have their action, after all. (NOTE: I'm not criticizing that fact, just that we haven't been given the information I want before that happens.)

Lex attempting to rescue Clark was a truly delicious bit of story-telling, reversing the roles established in the Smallville pilot episode. It's made all the more interesting that, unlike Clark, Lex fails. It's a great illustration of the two characters, their dichotomies, and their lives. It's not that he's unwilling to help or is a coward, but no matter how hard Lex tries, he'll never measure up to Clark/Superman.

Seriously, that was poetry.

Superman's subsequent rescue of Lex drives this point home all the more. Not only does he save his former friend from a nasty death at the Monitor's hands, he goes on to expend more of his energies - which are already somewhat depleted - to ensure Lex won't freeze to death. In this entire story, Lex has shown nothing but hatred for Superman, mild contempt for Clark Kent (not to mention their past issues), and yet the hero makes sure his nemesis will survive before considering his own needs.

Not that this story is without flaws, of course. For instance, Lex sure managed to virtually ignore his hypothermia until seconds before passing out. Adrenaline can make us do impressive things, but I think it has its limits. And as I said, I'm still pretty miffed at not knowing more about what mission these Monitors serve. When he granted Lex one question, I was really hoping he'd ask just that.

Art - 4: Every bit as dynamic as previous issues. Salazar draws a great Superman and an excellent Lex. I am a stickler for comics based on shows resembling their counterparts - and Pere Perez's work on earlier issues remains the best - but Salazar interprets them well here.

And this time, I have no complaints about the panel layouts. I totally understood everything that happened this time!

Cover Art - 3: I'm taking this one down a notch. It's serviceable, but it's a little strange. And not because Batman's in it when he didn't appear this issue. (I'm sure he will in one or both of the next two.)

Superman and Batman are facing off against ... what? The Monitor is behind them. Maybe he was backhanded by Superman? Maybe he also took a stiff back elbow from Batman? If so, who are the World's Finest facing now?

Everything looks great, especially the earth hanging precariously between our heroes - its fate on the line - but the placement of the characters just seems strange.