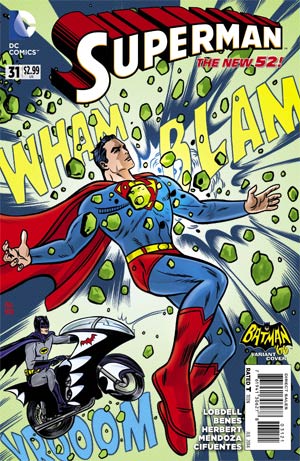 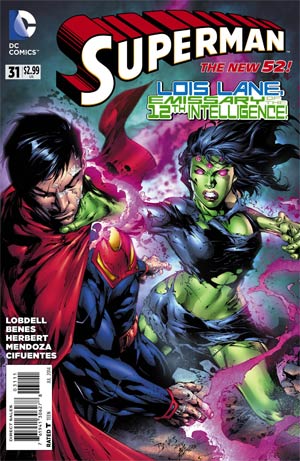 Click to enlarge
Superman is restrained in Lex Luthor's former prison. Having been infected by Doomsday after tearing his physical form in half Superman is literally being taken over by Doomsday particles. Batman, Cyborg, Doctors Ray Palmer and Veritas via hologram are working side by side with Lex Luthor to find a cure. Superman emits Doomsday particles in surges growing more powerful with each emission.

The Doomsday effect cuts off Veritas' hologram leaving her alone in The Block. Determined Shay begins analysis of the Doomsday particles she had captured for her in Smallville. In the meantime Lois arrives via helicopter and attempts to comfort Wonder Woman who is waiting outside the base. Superman has asked for Lois to give a final interview much to Lex's shock. Batman honors his friend's wish and allows Lois and Clark time alone despite Lex warning that the next Doomsday spore emission will infect them all.

Superman asks Lois to write an article warning them that he can never be trusted again, now that he is infected with the Doomsday spores he will eventually be taken over by them and become the dangerous monster. Lois on the physical plane is herself but psionically her Bride of Brainiac self awakens and strangles Superman. She laughs off what a pathetic creature he has become and that he still cares for Earth even though it won't be around much longer. Lois shows him a projection of the Teen Titans being attacked by Detritus which, though dead, is somehow still moving around attacking them.

Unable to ignore the peril the teens face Superman screams out, breaks his bonds and escapes despite Batman offering assistance and warning him to stay put. Wonder Woman watches as Superman soars away and prays that a solution can be found by Steel and what he brought back from the Phantom Zone. Diana contacts Cyborg in the Justice League Space Bunker hoping to track Superman or the Teen Titans down, and in the meantime Batman attempts to question Lois. He knows something during their private conversation set him off but Lois uses her psionics to make him forget and let her leave the base.

Superman races to the location Lois projected at him and makes short work of Detritus. The Titans step back in fear seeing a half Superman/half Doomsday standing before them. As the Titans watch helplessly Superman, realizing something is terribly wrong soars skyward.

Story - 4: Story-wise this chapter is a little thin on the ground with not a great deal actually happening.

The strength is in the character moments, though they are in fleetingly short bursts in themselves there is enough there to keep you invested in the story.

Lois and Diana, Lois & Superman... both incredibly touching. Veritas to this day remains an enigma as she is just 'there' and refers to events we've never seen, though there is no denying her loyalty. Lex is his usual self and it is a pity he isn't given more of a focus here. Bruce, I am surprised at, he is caring of his friend but unusually trusting and manipulated far too easily. There are slight problems with the issue but they aren't to do with the story, more to do with the 'long term effect', cross-pollination with Teen Titans and Superboy where elements of the other books show up here and ideally they would enhance and enrich continuity, however, because a new arc with a new team begins next issue, there are things that don't completely make sense and are never going to be fleshed out to do so.

The nicer side of the story is that the long term effects of "Doomed" itself are already taking shape at a much faster pace with Superman losing face and the trust of the public. Lois orchestrating the attack of Detritus, forcing Superman out in the public eye and carrying a disease that could infect anyone at any moment... "Doomed" is shaping up to be a great story though I'm not too keen on him being distrusted again as I had enough of that with "Grounded".

It's a nice action-packed farewell to the Lobdell era and I am looking forward to seeing where Superman #32 will go and how it will address recent events.

Art - 4: It is no secret I'm not a fan of merry-go-round artists within the same book. This issue doesn't change that fact but with the pace of events unfolding it isn't really a major factor. The artwork bursts with energy and is thoroughly engaging, though some facial expressions almost give a misreading of the situation leaving me perplexed as to whether the grinning is genuine, calculating or maniacal. Perhaps that was Benes and Herbert's intention.

Cover Art - 3: Lois just can't catch a break in the New 52 can she? It's nice to spotlight the panel of the psionic attack but it is just that - a snapshot of a moment and I think it would have been of far greater impact if the cover was instead a snapshot of the moment when Lois and Superman were tender and she risked infection of the Doomsday effect.