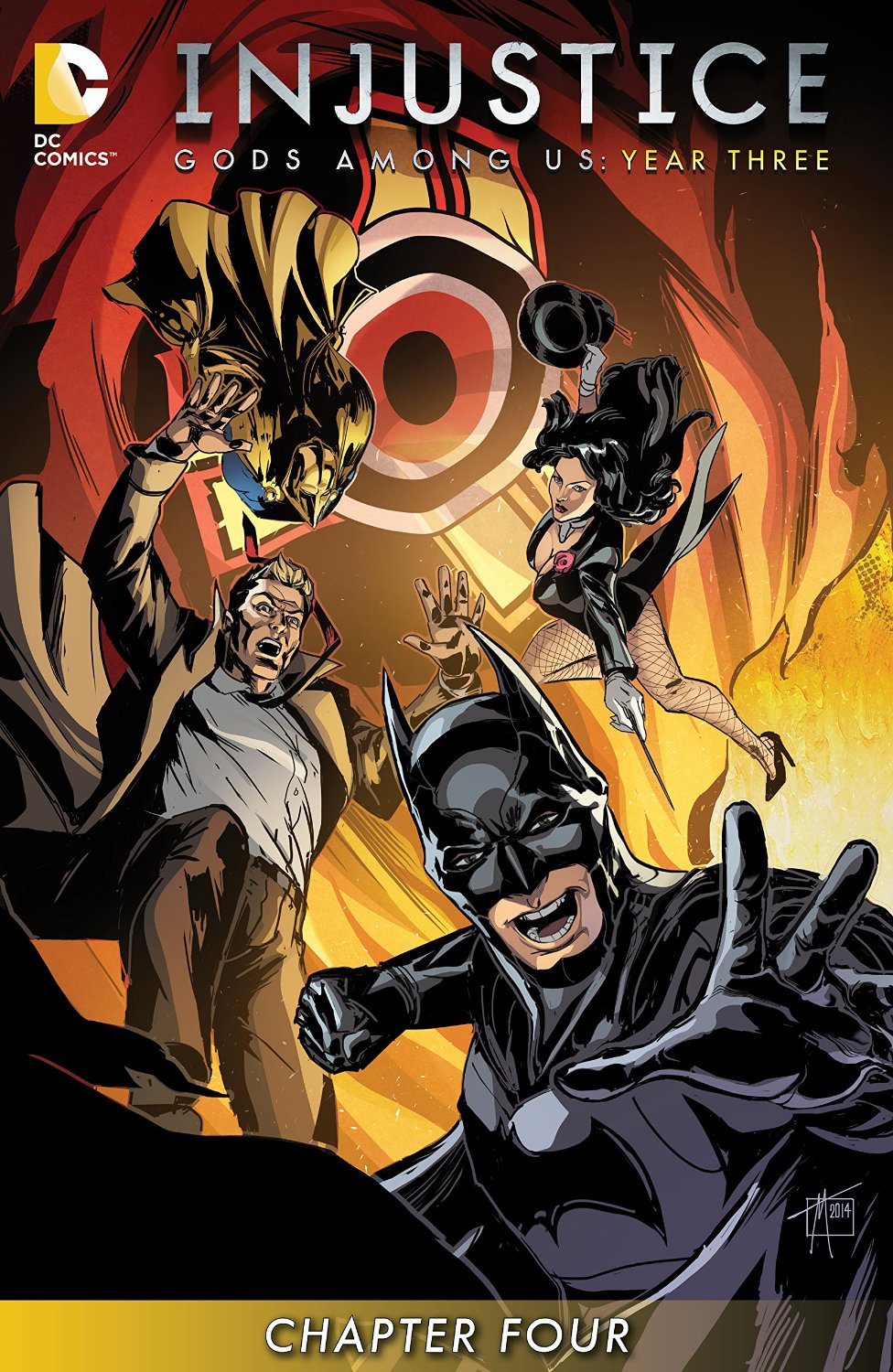 Click to enlarge
Etrigan the Demon, laments the loss of Jason Blood, who was slain by the sudden appearance of the Spectre. All inside of Blood's home scramble to effect and escape, and the Batman looks to enact a hasty plan. However, Constantine laces into Batman for what he believes is a poor strategy, resulting in Batman punching him. Batman confronts the Spectre to buy time for the others, who teleport away with Zatanna's help, once the Spectre is distracted. The Spectre realizes the ruse immediately after it happens, but not with enough time to keep Zatanna from making off with Batman as well. Once they're safe at the Tower of Fate, Batman confronts Constantine about his actions. Constantine retorts that Batman isn't up-to-par and needed the shock treatment. Batman has been out of sorts, according to Constantine, and in order to defeat Regime Superman, and possibly, The Spectre, Constantine will need Batman to be everything that he is.

Story - 2: While it's expected that the low installment would come, there was no indication or expectation that it would come this early. Taylor makes a biting commentary about the Batman, only to wash it away for the sake of... well, actually, nothing. It doesn't further the story and it's just a reminder of how much one has to bloviate to keep Batman in the mix in such surroundings where he's completely out of his depth. It would take a lot of thought to place Batman against the Spectre, and have him escape, let alone emerge victorious, and rather than put that thought into this chapter, the reader is given the worst possible sleight of hand: the one where one can see the trick and how insulting it is to the intelligence of the audience. It's a rehash of what was given in Year Two... and Year One for that matter, and so early in the game of this year, it's completely unnecessary. The most frustrating thing is that Taylor knows how to craft this type of scene.

Taylor's work on Earth 2 shows that he can craft a convincing scene of an overpowered group on the run from an unimaginably powerful force. Perhaps it's the demand of time or the limit of space that impedes his hand here, but nonetheless, it's a thoughtless display of ignoring the precepts that one has established, and just two pages beforehand. It makes Constantine's harangue unnecessary, as Batman was working on a plan without being badgered, and if the Spectre is willing to listen to Batman because he "punishes criminals," nearly everyone in Blood's home does the same. What makes Batman unique? It isn't shown, and it becomes another "I'm Batman" moment rather than a scene that could have highlighted the skill and intelligence that makes Batman such a unique character. The Spectre was ready to kill Harvey Bullock for just standing next to Jason Blood, but Batman, the leader of the group of offenders is allow to talk? To the Spirit of Vengeance? What is more, Zatanna's magic was able to supersede the will of the Spectre? It seems the Spectre will be Ganthet for this year: an immensely powerful force, that will conveniently not use that power for sake of the readership having a 24 part tale.

One of the reasons debate about characters and their abilities was all ways fun for me, is because of the creativity that was involved in the discussion. If you could get past the fanboy malarkey, and the snooty part of the brain that won't suspend disbelief, from a writing standpoint it opens a lot of avenues for stories about character who have immense abilities. Superman, Batman, Wonder Woman, The Flash, Green Lantern, these are characters with unlimited abilities in conjunction with the tasks that are set before them: policing a universe, bringing peace to Man's world, cleaning an eternally corrupt city, and fighting a never-ending battle for Truth, Justice, and the American Way. The idea is that such breadth allows for a wide range of imagination and creativity, to tell stories that have readers noting to themselves: "I had no idea. Cool!" Instead we're given casks of the characters, with which the slightest tap proves just how hollow they are.

Cover Art - 3: Much too heroical for the themes within.