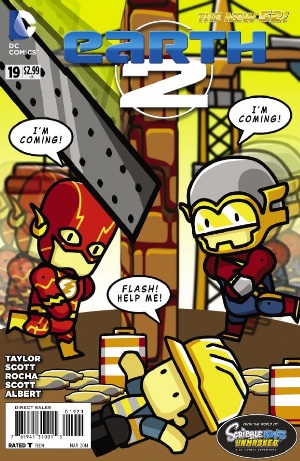 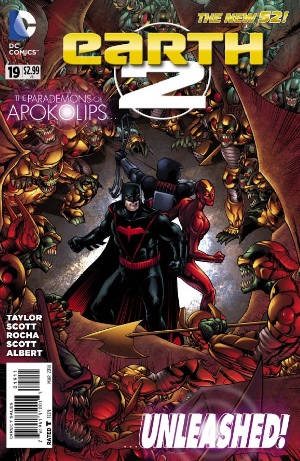 Click to enlarge
The remnants of the World Army are in full retreat as they observe Brutaal leaving with his captives (Terry Sloan, Mr Terrific, and the Flash) in tow. The sight of a cloud of parademons gives them pause, as they realize the situation has gone from worse to hell. Batman is about to lead his resistance in the making out, but Major Soto advises that there is a reason to linger. There's an alien, Jimmy Olsen informs, being kept below. Aquawoman punches her way to the lower level, and after an imaginative threat, is shown where the alien is held. The vault-like door of the alien's "cell" is opened to reveal a teenage boy, Val, in a typical, contemporary apartment. The young man offers the Batman a cup of tea, Chamomile, but then begins to feel ill. Batman reveals that he's carrying Kryptonite, which immediately identifies Val as a Kryptonian. Batman and company make their escape, and amidst the detritus of war, something green glows indomitably. Brutaal continues to pillage wherever he's located, decimating the Washington monument and pretty much Washington D.C. He announces that Apokolips is dying, and that Earth will be used to take its place.

Story - 3: It's still too early in the day for a low rating, though this issue begs for one. The revelation of issue #16 has lost all of its inertia with this installment. The situation at hand with the story, much like the fate of Earth 2, must be dealt with swiftly and definitively... if Earth 2 is to have a healthy series run after this storyline concludes. The suspension of belief is necessary to embrace fiction, especially fiction of great quality, as that readily takes one away from his comfort zone that boilerplate offerings are wont to do. However, Earth 2 is in the cross-hairs of needing not only suspension of disbelief, but the suspension of intellect, if not good ol' common sense.

The war with Apokolips mirrors the great wars of Earth, inasmuch that the time between WWI and WWII is now looked upon as an interlude between the two. The five years of peace and rebuilding have been decimated into nothing more than a brief respite from the initial Apokolips war, a war that cost the people of Earth 2 nearly everything, and the sacrifice of their greatest champions. Apokolips has returned and there are no champions to be seen. Worse, a former wonder is now the champion of the invading force. It presents a scene of sheer hopelessness, and that has to addressed. The world of Earth 2 is taking such a beating, that even if Apokolips is driven off, the question of what world will be left for the people is incredibly palpable. If you've been reading Earth 2 from the onset, it's been nearly two years of the Apokolips storyline, with no reasonable end in sight. There has to be an end to it all, but truth be told, there's little chance of victory without it being mercilessly contrived.

Batman has assembled a resistance that in another story may be able to pull the needed rabbit from the applicable hat, but against Brutaal, they seem to be little more than a punchline waiting to be ripped in half. This issue presents Brutaal as less foreboding than when he was introduced, but that's because of the extra dialogue and Scott's rendering, which put him in stock villain garments. Still, we need only look to what Brutaal has shown himself to be capable of from previous issues, and what we know he should be capable of as well. If Brutaal is Superman not merely co-opted, but corrupted by Apokolips, then magic, even Kryptonite may have no effect that can stop him. There's no one else on the planet that can withstand him, not if he continues to play at the level he's shown, and there's no reason for him not to. Clever as the Batman is, you can't out think a planetary implosion. Therein lies the challenge for Taylor and Earth 2. Resolve the story and make it work, make it believable, or Machina it all away and know that the base will stay while credibility leaves. This installment shows the ball out of steam, a birdie an eagle away from being on par, but with no reasonable shot at doing it. It's not an enviable position to be in.

All that being said, the reveal of the new Kryptonian was enough to keep a man reading for a while longer. That the lad was named Val is curious as well, and we'll see how that matches up later on. Taylor's injection of characters reimagined like Jimmy Olsen, Mera, and Red Tornado is very appealing, and I've a great interest in seeing how they grow from here on, but first, you've got to end the war, man!

Art - 4: Scott is still a monster on pencils, but Brutaal has lost his edge in this issue. He was down right scary before, but Earth 2 #19 has him rendered almost as if he were an action figure.

Cover Art - 2: There's no sense of fear, urgency, action, nothing in this cover. It's a dull, uninviting splash that doesn't represent the events within.