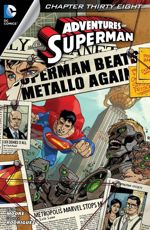 Click to enlarge
Ex-Daily Planet reporter, Carl Hobson is on to Superman. He knows 'the' secret.

Carl confronts Clark Kent about an 'investigative' report he is doing on Superman and the Daily Planet. He sees the 'obvious' connection between Superman's activities and the rise in the Planet's circulation.

Carl suspects that Superman is purposely saving Metropolis for the benefit of the Daily Planet. Or maybe Superman saves people just so he will end up on the Planet's front page. Either way, Carl just can't believe that Superman is a good person who merely wants to help people. There must be another reason Superman does what he does.

To prove his theory, Carl pays a visit to Stryker's Island where many of Superman's enemies are imprisoned. After asking leading questions of the Toyman, Parasite, The Atomic Skull, Terra-Man, and Metallo, Carl may have what he needs to break the story. After all, these vermin are known for telling the truth. Right?

Uh, no. Even Carl begins to realize that these weirdoes at Stryker's are off their rockers.

But... surprise! Metallo uses Carl's visit as a much needed distraction to facilitate his prison break. And of course, Carl is taken as a hostage.

Story - 4: The Good: I like that 'Exposed' addresses the biased reporting that is alive and well in today's world. Carl isn't trying to find out the truth. He is using his 'investigative journalism' skills to settle a score. He is presumptuous in what he believes to be true. He isn't simply following 'facts' to an obvious conclusion. He is not an impartial journalist.

For example, Carl completely discounts Clark's statements because they do not fit his template. However, Carl is more than ready to believe the stories of the villains on Stryker's Island. He is a reporter that is only interested in the facts and statements that lead to his 'wanted' conclusion.

The Bad: Part Two isn't as interesting or fast paced as Part One; however, it does move the story along. Maybe Part Three will be more action packed.

Art - 4: I very much like the art in Part Two. The close ups are awesome. Characters' expressions reveal exactly what they are thinking and feeling each moment. From Carl's stubble to Kalibak breaking away from his chains, not a line of art is wasted or misplaced.