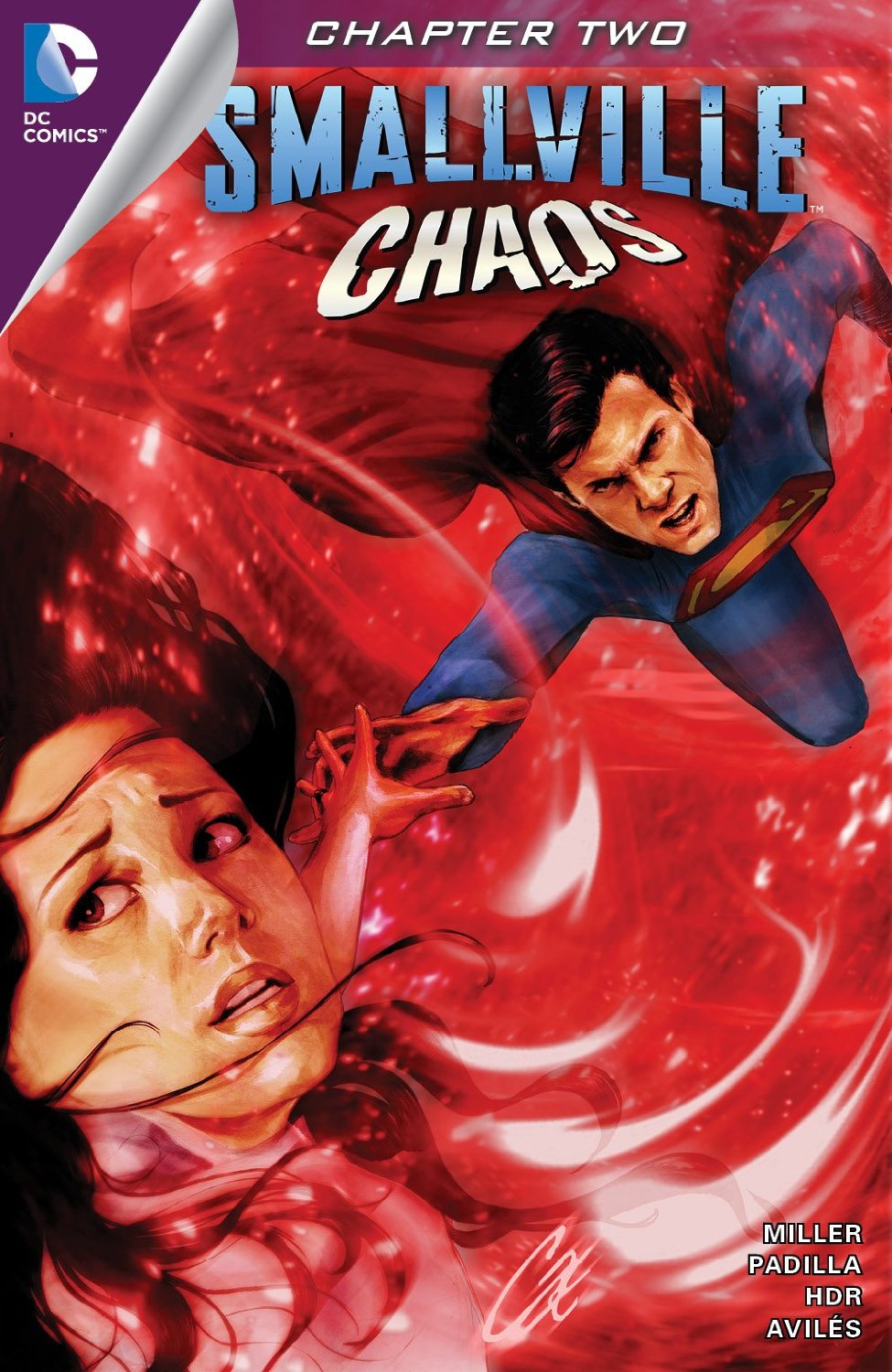 Click to enlarge
Chloe, Oliver, Diana, and Steve (you know, the Season 11 Gang) discuss the future while touring the D.E.O. Headquarters located beneath the Potomac. Diana is convinced Chloe will bear Oliver a son. Steve would like to have Oliver - as Green Arrow - train tactical soldiers/agents to lead into combat for the United States.

Those discussions end, however, when everyone receives a call from Booster Gold at the Antarctic facility informing them Lois and Clark vanished into a rift between worlds, or a bleed. Skeets informs them he detected unknown alien technology at the site of the malfunction, where Otis Berg deposited something suspicious last issue. As it turns out, Otis is listening in on the conversation, and he runs away when Skeets says he's attempting to track the technology.

After ending the conversation with the Season 11 Gang, Booster asks Skeets if he has any historical records of Lois and Clark/Superman vanishing from this reality. Skeets says he not only has none, but he's having trouble accessing any records they brought with them from the future.

Meanwhile, at STAR Labs, Emil Hamilton and his team are trying to determine how the emerald caused Professor Gordon to go insane in the last issue. Apparently, the emerald releases some sort of alpha waves, and unfortunately, there are other pieces still out there.

Which brings us back to Metropolis, where a pair of Daily Planet reporters are investigating the scene of the incident between Superman and Gordon. One of them, named Lombard, accidentally bumps into a small fragment of the emerald on a lamppost, pricking his hand. Before we cut to the next scene, he mutters, "I am the wrath of God."

And so we cut to another earth in the multiverse, where Superman wakes up to find himself and Lois in a Metropolis very unlike the one they know. The place looks like a deserted war zone. Burning cars line the streets, smoke fills the air, and the skies are bright red. Superman takes hold of Lois and flies up to get a better view of their surroundings. The see what appears to be a superhero crucified on a symbol atop a building. Overhead, several ships like the one the Monitor had back in "Alien" patrol the skies.

More on that in a moment. Let me start by saying what an amazing leap forward this issue was. Perhaps I was still reeling from the disappointing climax of Lantern, but Chaos #1 just felt clumsy and disjointed. Not so this time. The story flows along at a nice, organic pace. The last issue underwhelmed me, but I was still hopeful this story would deliver. This issue suggests I didn't hope in vain.

The emerald and the reactions of those it affects raises some interesting questions. Initially, I was inclined to think it would be the Smallville equivalent of Eclipso. I still think so, but the statements of those it touches suggests it might somehow be linked with the Spectre. Or perhaps it's both? It's the sort of question it's actually fun to have. Unlike, you know, wondering how in the world all of the Green Lantern backstory fit with the Smallville mythos. (Short answer: It doesn't.)

The entire story is entertaining and engaging, but the real eye-catcher is the alternate earth. Who'da thunk, right? The Monitor ships overhead bring us back to the "Alien" storyline, not to mention the ongoing hints we've seen since some of the earliest issues of an upcoming Crisis. And, although it's just one panel, we see a defeated superhero wearing the same costume that one Mr. Majestic (i.e. Lord Majestros) used to wear when Wildstorm was more than just a memory. Do I dare imagine this is the Wildstorm universe? Alive and well (sort of) in the Smallville continuity?

If so, that makes this the greatest thing of all time ever in the history of anything.

(Okay, that may be over-selling it a bit.)

But still, it's nice to wonder. Will we see the WildC.A.T.S? Maybe Gen13? You know, the real ones. Not the New 52 counterparts. These are fun questions to ponder. And in addition to good storytelling, that's what makes this issue so enjoyable. Here's hoping that continues.

Art - 3: The art feels better this go around. Whether that's to be attributed to the additional hands working on it is something I can't answer. The images feel more complete, whereas the last issue felt rushed. As with the story, here's hoping this continues as well.