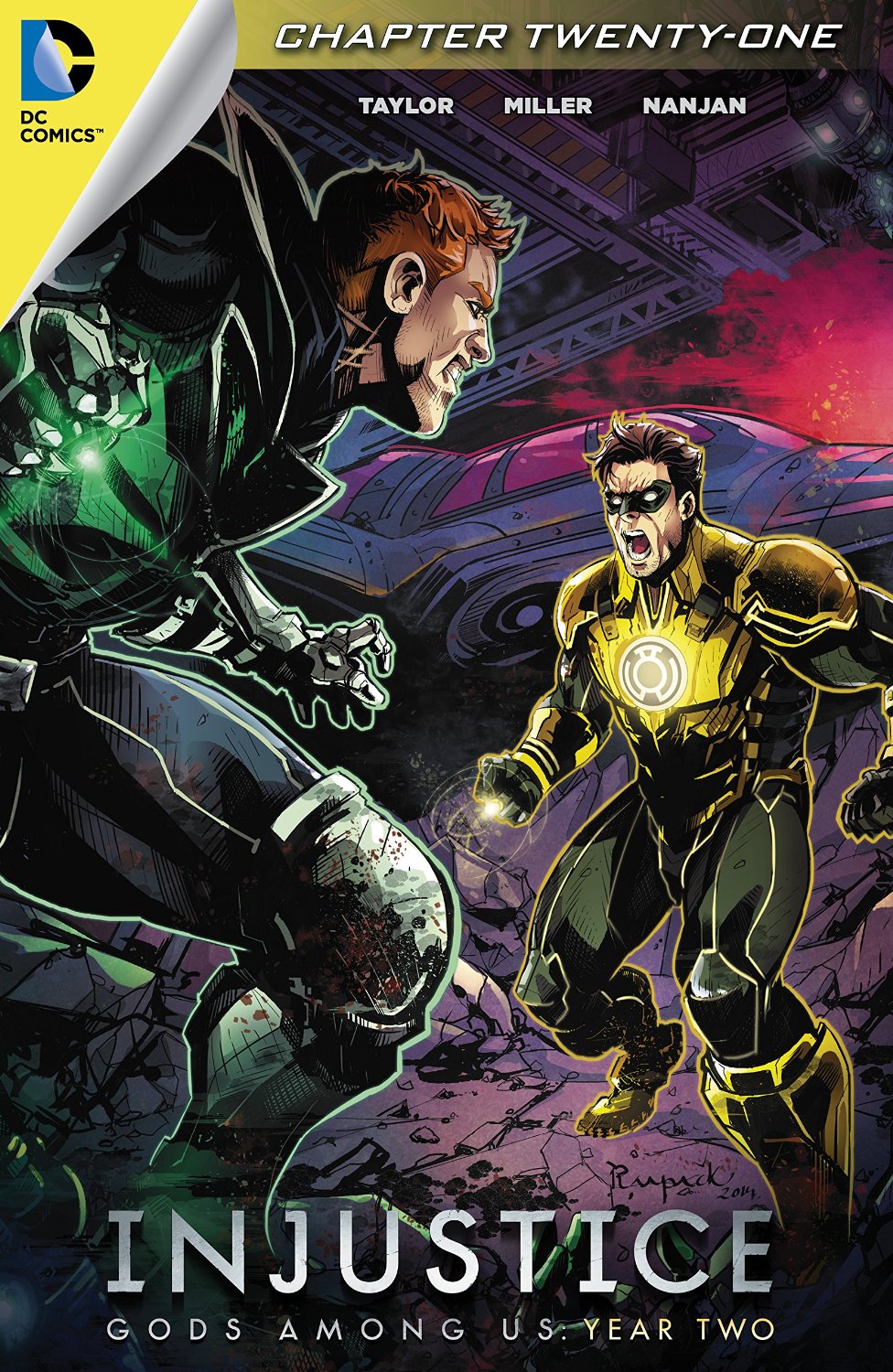 Click to enlarge
Hal Jordan accepted a yellow ring from Sinestro in order to save Carol Ferris, and Ganthet declares that "he has fallen." Sinestro tries to engage Ganthet, but Ganthet slays Sinestro's accompanying Yellow Lanterns with a wave of his hand, leaving Sinestro shielding himself for dear life. Ganthet leaves Sinestro to engage Regime Superman. Ganthet blasts Regime Superman, who falls into Earth's stratosphere and is saved by Yellow Lanterns. This plays right into the hands of the Insurgency, who bombard Regime Superman with missiles, setting him up for an attack from the Batplane. Regime fires on and destroys the Batplane, believing it to be flown by the Batman. However, out of the conflagration flies Black Canary, who uses her sonic scream to immobilize Regime, sending them both to the ground in a mustard colored, mushroom shaped explosion.

Story - 4: Violence? Check. Ridiculous plot? Check. Cliffhanger? Check. Add more senseless violence? Double-check. All the while, Injustice doesn't miss a step in what it has set itself up to be: a dysfunctional take on classic superheroes, each more dysfunctional than the next, which no regard for the sensibilities of the characters, their powers, etc. Last issue the pardon was given for the moronic way that Cyborg was taken down, as it gave Commissioner Gordon a chance to end well. It's only fair that clemency is also given to Black Canary, who is looking to avenge herself on familial grounds as well. This scenario of Superman being vulnerable to very loud noises, i.e., "sonics" is part of the legacy of The Dark Knight Returns. It was incorrect then, and still is now. It shouldn't require much thought to sort it out either. Superman is able to travel a speeds approaching light, and possibly FTL. The sonic boom from traveling at Mach I is enough to rupture a human eardrum, and the sound at greater speeds would be deadly. However, he seems immune to these "sonics," but susceptible to others... while it's al the same, it's all acoustics. Sound that affects his eardrums would also affect other parts of his body as well, but only his ears seem to be vulnerable. It would be good to remember that Superman is also invulnerable, so even if the sound could affect him, the best you could hope for is him being annoyed. There's also the problem of him having total control of his hearing, and being able to tune out sounds whenever he chooses, and the fact that he do sonics of his own, but those things just get in the way of well-done violence.

I noted in a previous issue that Taylor was re-treading the storyline in placing Carol Ferris in danger, which allows Hal Jordan to fall, much as Lois Lane's death did as much for Regime Superman. Now, we're being given a send-up of Regime Superman's fight with Captain Atom. Another use of something Superman is vulnerable to (sonics as opposed to red solar radiation) and another big explosion... from which Regime Superman will survived, and either he will defeat Canary or someone else (Wonder Woman is a likely suspect as she's been absent from action for most of year two) will pitch in and help him out. It shouldn't be surprising that Injustice is all ready revisiting itself, as, which I've stated before, there is only so much that can be done, since there is so much that has to be done to conform to the video game, but a book that is so popular and sells so well, you would think there was a little more to it.

Art - 4: Miller's and it shows. His Canary soars out the explosion like a Phoenix, and Regime's red-glare, before he bursts the Batplane in the air are nice touches.

Cover Art - 3: A plain and bland image after what's come before.