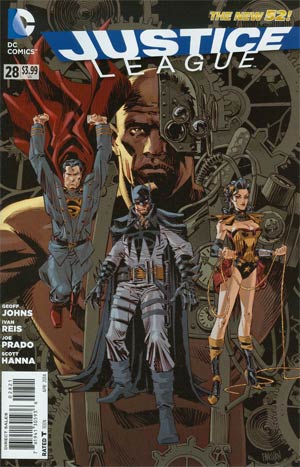 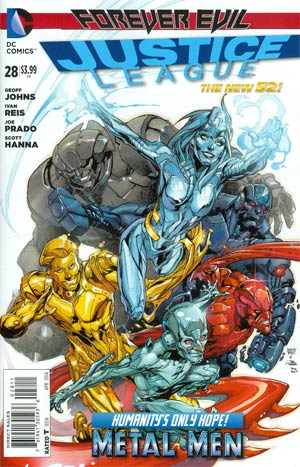 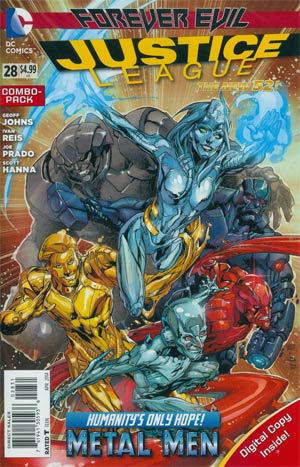 Cyborg confronts Dr. Will Magnus about using the Metal Men to fight the Crime Syndicate and the Secret Society. Magnus refuses and explains the Metal Men's origin.

Six months ago, he created the Metal Men for the US Government in order to get "in and out of dangerous environments, whatever those may be for whatever task is at hand". When he activates them, they immediately take on human characteristics. When Devol, Magnus's superior officer, enters the room to take them and use them to eliminate targets, the Metal Men refuse to kill anyone and leave.

Later, someone stole Magnus' prototype of the Metal Men and threw it into a tank of chemicals, creating Chemo. At Magnus' apartment, the Metal Men have been hiding out and right as Will is about to bond with them, Chemo attacks. The Metal Men save Will and everyone else from the attacks, but with the price of their lives.

In the present, Cyborg tells Will that the reason he doesn't want to activate the Metal Men once more, is because he's afraid to lose them again. Victor convinces Will that this is what they would have wanted, and Magnus decides to reactivate them and "save everyone".

Story - 5: I adored this story. I truly did. The one thing that Geoff Johns does extremely well as a comic book writer is that he breathes new life into old and forgotten characters and makes them relevant and exciting again. He did this with Hal Jordan. He did this with Barry Allen. He did this with General Zod. He did this with Parallax, with Sinestro, with Black Hand, with Aquaman, with Cyborg, with Alfred Pennyworth (Batman: Earth One), and now has done it again with The Metal Men. To be clear, there are many other characters I could give examples of that I think Johns has done a fantastic job of revamping, but I think those are the biggest ones at this point.

I never really cared much for the Metal Men as characters before this issue. I always thought they were just those characters that you have in the background and use only when necessary, like in Alex Ross and Jim Kruegar's JUSTICE. However, this issue actually got me interested in the Metal Men to the point where I would love to read their adventures in their own series or even see a live action film.

I thought Chemo's origin taking place in this issue was also very cool, especially since it has to do with the Metal Men. I think Chemo makes more sense as a Metal Men foe than literally any other character he would face, so I was very satisfied.

Overall, I really enjoyed this issue. Outside of Cyborg it wasn't really Justice League, but I didn't mind as I finally became interested in The Metal Men.

Art - 5: These guys are always good; I had no problems with the art here.

Variant Cover Art - 3: Meh. I don't know. I'm not into the whole "Steampunk" craze. Cyborg looks pretty neat, but Superman, Batman, and Wonder Woman do not look exciting to me at all.