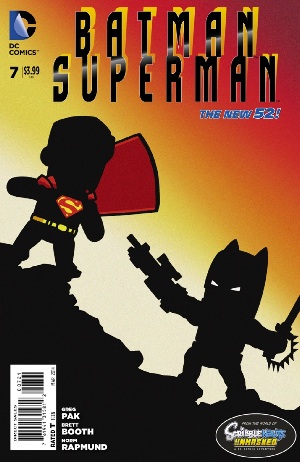 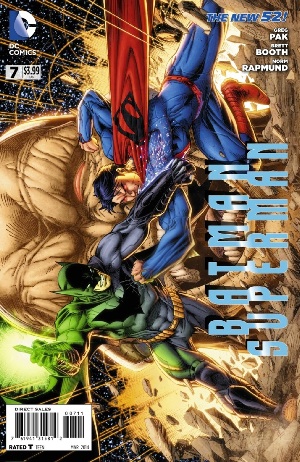 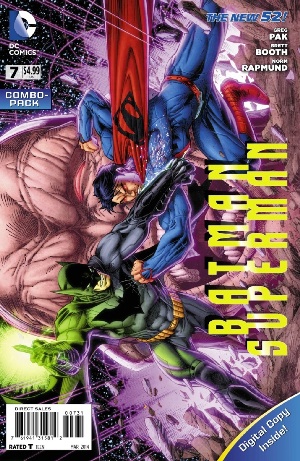 Lydia Pergamon waits in line at the bank to get a loan so she can keep her apartment, when suddenly Batman and Superman fly through the bank, scattering everyone and everything everywhere, leaving Lydia alone with video game glasses. Putting them on, she joins the fight against Superman by helping control the Dark Knight. Meanwhile, Mongul gloats to his servant Agnes as he leaves to observe elsewhere.

As Mongul leaves, Hiro wakes up and attacks Agnes, trying to destroy the video game device that's linking with satellites that will help Mongul enslave the world. Superman stops Hiro just in time as Batman is connected to the device and if it is destroyed, Batman will die. Batman and Superman continue to fight until they are right next to Mongul's satellites, which Superman tries to smash. Batman tells him that the only way to defeat Mongul is to destroy the video game device, of which Batman is connected to, though Superman refuses. Instead, he allows Batman, and nine million other people who are controlling him, to defeat him. The nanites that initially infected Batman now infect Superman as well and bring him "back to life". Superman then asks Lydia if she will help him, even though he unintentionally hurt her, and she accepts.

The gamers then have the World's Finest superheroes team up and defeat Mongul. Afterward, Hiro figures out how to save Batman and Superman, Superman, in his Clark Kent identity, uses Wayne Enterprises to approve Lydia's bank loan and help her save everything. At the Fortress of Solitude, Superman reveals that Mongul is trapped in the Phantom Zone and the Son of Mongul is teased.

Story - 4: First of all, I apologize for this review taking as long as it did. I was actually in Israel over the past 2 weeks or so (I left the day this issue was released actually) with extremely limited internet access, so thank you all for bearing with me.

I liked this issue. As most of you probably know by now, I have not enjoyed this arc of Batman/Superman to the same extent that some of you have, which is fine, it just shows we have different tastes. However, I thought this issue wrapped up the story nicely and was actually pretty entertaining.

I liked how Superman was written in this issue, which is truly why I gave it a 4/5. The past two issues Superman was written almost as a "dumb teenager," which was not only bothersome to me but just completely inaccurate to his character. Outside of say Justice League and Superman/Wonder Woman, the New 52 has not done a great job of writing Superman and showing who he is. For the most part, the New 52 really has relied on Superman's physical strength and not his mental or emotional strengths. However, this issue, Superman was done right. He was 100% willing to sacrifice his life to save his friend, he was considerate and caring for someone he owed nothing to, and he stayed strong when he had every reason to break down, and that is Superman!

That being said, Batman was also willing to sacrifice himself for the world and he deserves an honorable mention for that.

The inclusion of the Lydia character was also a nice touch as I think it allowed the reader to relate to how the common person would react to a battle between Superman and Batman in the real world.

At the end of the day, this arc was not my favorite "World's Finest" story, but it definitely ended like every Superman/Batman story should, with the good guys winning, showing us that they're friends, and living on to fight another day.

For the next Batman/Superman arc, the book will actually be crossing over with World's Finest (Power Girl and Huntress) for the "First Contact" arc where the two teams will team-up for the first time, an arc that I'm really excited about. So I will be reviewing both Batman/Superman and World's Finest for this arc. If you would like a little bit of background to the Power Girl and Huntress characters (the Supergirl and Robin of Earth 2), then I'd suggest reading World's Finest #19 which is a Prelude to "First Contact" that literally leads directly into the arc. I'm not going to review it for the Homepage, but I will recommend it and reference it in future reviews.

P.S. Still not liking the sideways panels though...

Art - 5: I love Brett Booth's artwork. Only good to report.

Cover Art - 5: Although it was sideways, I really liked this cover art. With Mongul's head laughing in the background, the Batman/Superman fight just looks amazing.

Cover Art (Variant) - 5: Another fantastic cover this time paying homage to Frank Miller's The Dark Knight Returns. It's actually a perfect cover to replicate for this issue as it is about Superman facing off against Batman. Although I don't understand Scribblenauts at all, I do enjoy this cover very much.