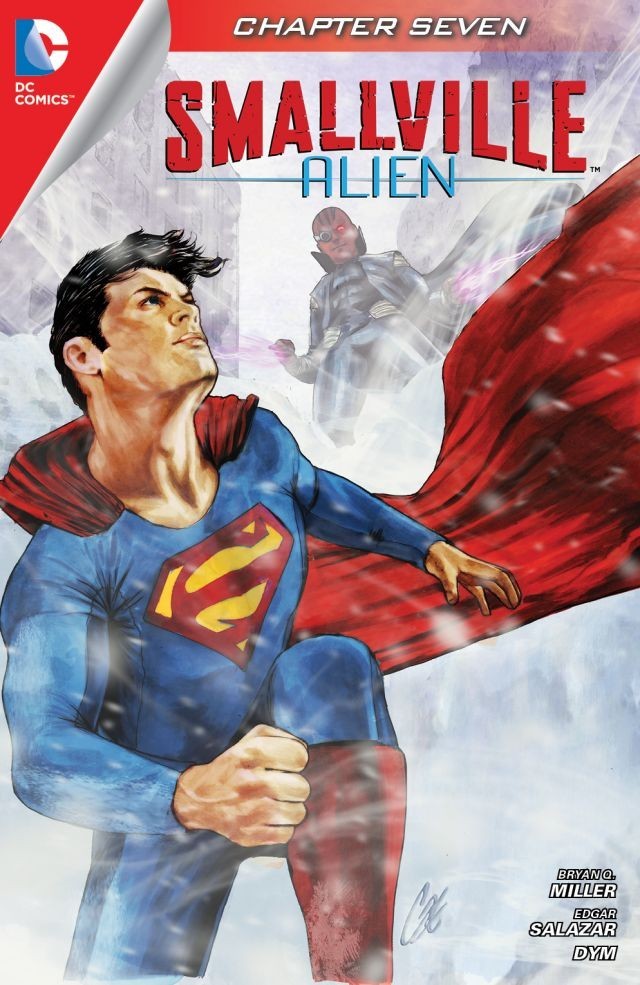 Click to enlarge
Lex, Superman, and the Rocket Red Brigade all take a moment to recuperate after the Monitor's escape. Superman takes to the sky to recharge under some direct sunlight and contacts Tess at Watchtower. Tess brings him up to speed on how Moscow and the rest of the world reacted to the incident - by covering it up - and they get to work trying to learn more about this mysterious alien.

Superman returns to ground level, as Clark, and bumps into Lex (literally). Clark proceeds to question Lex once more on why he came to Moscow, which prompts Lex to voice his appreciation and disdain for him. Meanwhile, the Russian Premier tells them he and Moscow have officially washed their hands of the situation. And so, Lex takes Clark with him as they head off in search of the Monitors' last recorded coordinates after he escaped.

In Gotham, Chloe is trying to get to know Bruce Wayne while he meditates in the Batcave. She broaches the topic of inviting him to join the Justice League, and Bruce doesn't give her an answer.

Back in Russia, Clark and Lex arrive in Chernobyl. They discover a tunnel which leads to a spaceship underground.

Story - 4: It's good to be back in this storyline. Harbinger started with such promise but ended with disappointment. This story has yet to do that. Here's hoping that continues.

Once again, Lex is the driving force of this series, not just as a character but in sheer entertainment value - his dialogue and reactions to Superman, Clark, and Otis. While he has a mild appreciation for Clark, Lex has no respect for Superman, and he doesn't bother pretending to. Despite the surrounding devastation (which he inadvertently helped cause), Lex's attention is directed solely on our hero, and all his energy is focused on criticism and vitriol. Even when Superman leaves the scene, Lex offers a final parting shot: "Coward."

Ironically, he doesn't say anything so harsh to Clark, who he believes ran from the danger. In fact, he offers the reporter a compliment, a backhanded one but a compliment just the same. And with Otis, he seems to hold a genuine appreciation for the man, for his intense loyalty if nothing else.

Batman, meanwhile, isn't so entertaining, but he's fascinating in his own right. While the Dark Knight has seemed to veer toward the conservative side of ideology in most stories, this one comes across a bit more liberal here... not unlike a certain emerald archer. He tells Chloe his focus is on Gotham rather than the planet as a whole, kind of like Oliver Queen did when approached to join the Justice League in another series. His verbiage is different, but the tone seems the same.

And I like that. I like when there's more to a character than how hard he can punch.

Art - 4: Salazar remains consistent with his artwork. I can't really offer anything here that hasn't been said before. I guess I can say that this version of Superman's suit is still my current favorite. I'm sorry, but the armored, nanotech, 90s Image wannabe is stupid. Superman's invulnerable, why does he need armor? That's not the case here. Smallville's Superman suit is sleek and to the point. It's not covered with unnecessary lines or made up of nanobots. It's a suit. And that's all Superman needs.

Cover Art - 4: This is an effective and appropriate cover. Although the Monitor doesn't appear anywhere in this issue, we know he's out there somewhere. Seeing him in the background, obscured from view by the snow, is an effective illustration of that.