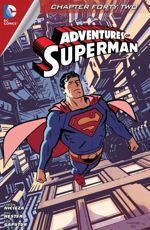 Click to enlarge
Superman faces his biggest challenge... babysitting his neighbor's kids. Looks like this is a job for Clark Kent.

As Clark knocks on his neighbor's door, he wishes for something to take him away.

An alien invasion would do the trick.

But alas, it isn't to be. The door is answered and Clark meets...

Not a mystery how this night is going to go. Spike is already sporting an attitude. And though Sugar thinks Mr. Kent is cute, Spike is having none of it. Having a babysitter means good times and misbehaving.

Thus, Spike commences alpha plan, DESTRUCTION OF THE APARTMENT. And while Clark is shocked and distracted by Spike's unbelievable behavior, Sugar and Spike enter the elevator and head toward the building's roof.

But Spike isn't ready for Clark's speed. To Spike's shock, his babysitter is on the roof before the little-demons are. Before Clark can get them off said roof, there is a mighty explosion across town at S.T.A.R. Labs. The Atomic Skull is causing mayhem.

Quickly, Clark changes into Superman, wraps the little-demons in his indestructible cape, and flies off towards S.T.A.R. Labs.

Superman consults with the witnesses at S.T.A.R. Labs then takes off after Atomic Skull. Turns out, Skull has stolen some sort of reality alternating device. Before Supes can stop him, Atomic Skull zaps Supes into another reality, leaving the little-demons behind.

Little-demons terrorize Atomic Skull. By the time Superman returns to proper reality, the villain is begging to be arrested. He just wants away from the over-zealous Sugar and Spike.

Later that night, Clark tells the parents how good their kids behaved. As they watch the kids sleep, the amazed mom asks Clark if he could babysit again.

No more babysitting for Clark.

Story - 3: The Good: This is a fun story. I had a smile on my face the whole time I was reading. Clark's situation is relatable. He's a nice neighbor who got talked into something that he later wanted to get out of; however, he made a commitment and he keeps it.

It's a nice story to read to kids.

The Bad: I didn't really find anything wrong with the story. It's not the most memorable Superman story. But it's fun.

Art - 3: I'm not a big fan of this type of art. However, it does fit for the cartoony-like story. It's fun for kids.

Cover Art - 3: The cover art is fitting for the cartoony-like art on the inside. I'm not a big fan of this type of art. However, it's a fun look for kids.