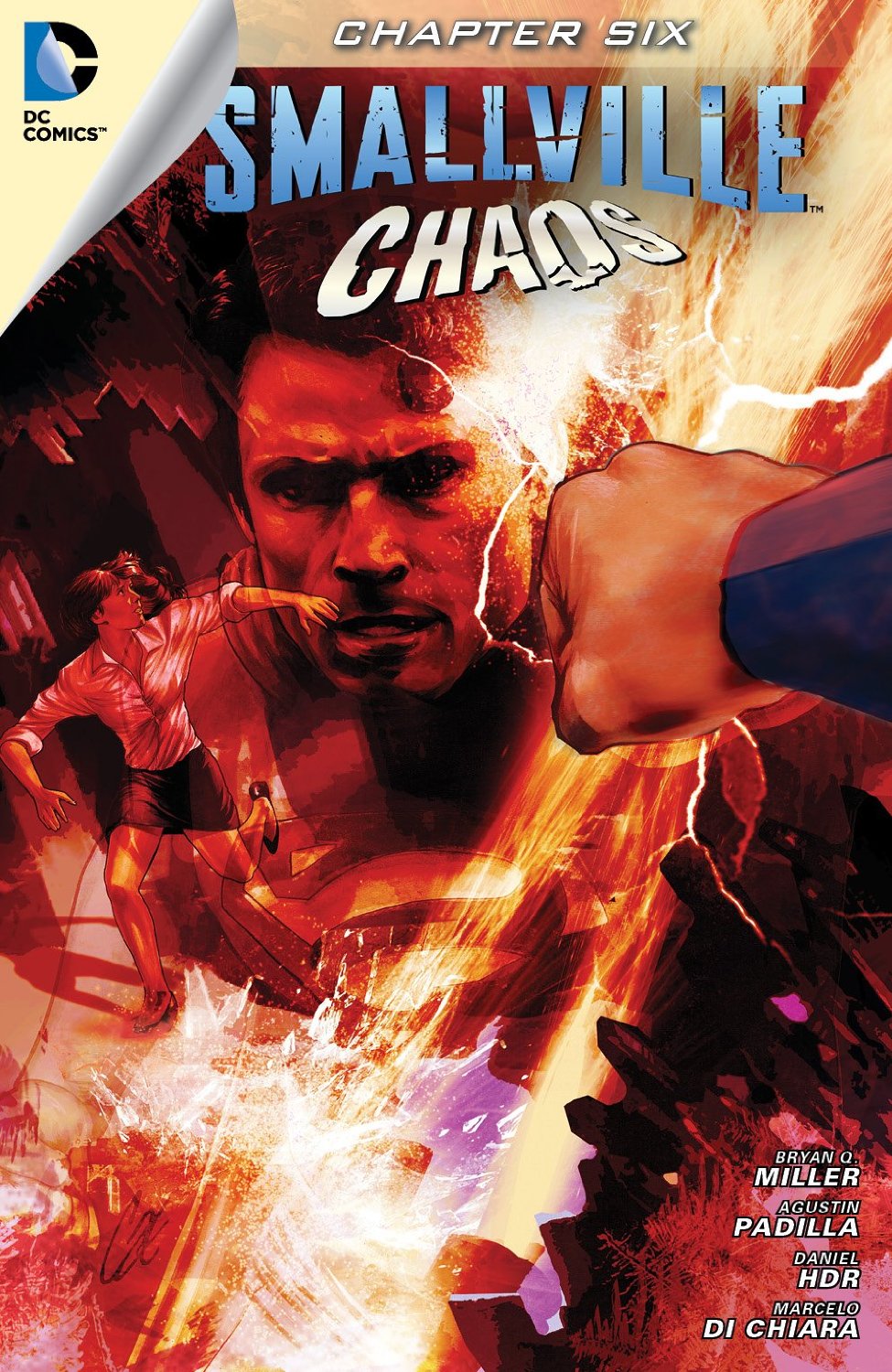 Click to enlarge
Lex Luthor continues his hostile takeover of the Antarctica facility, convinced his actions are for the greater good of the universe. Otis Berg reminds him that, so far, no other Lex Luthors from alternative universes have tried contacting him. Lex says he's done trying to reach them and intends to contact someone else.

Elsewhere in the facility, Booster Gold overcomes two of Lex's Yellow Lantern Corps members and escapes to the outside. Unfortunately, he's ambushed by more Yellow Lanterns waiting for him.

Meanwhile, on Earth-Majestic, Lois manages to convince Jor-El to release Superman and help them travel to another parallel world. Jor-El warns her he cannot guarantee which earth they'll arrive on but agrees. He asks only that they take him with them.

Jor-El downloads himself onto a crystal, and they teleport away just before the Fortress is destroyed. They arrive on another earth, one that's not in much better shape than the one they left. This earth was attacked by Apokolips just like the Smallville TV series finale, except this one didn't have a Superman to save the day, and the fire-belching planetoid has collided with earth.

Story - 4: Where I felt the last issue was a little wanting, this one delivers again. "Chaos" has had a few hiccups along the way (see issues #1 and #5), but overall it's a very entertaining read. It helps that I really dig stories with parallel universes and alternate realities, something this entire story is built on, but even aside from that, "Chaos" tends to always fire on all cylinders. It's well on its way to becoming the most entertaining story in all of Smallville: Season 11.

But that's just my humble opinion, of course.

There are so many things happening in this story, so many threads heading down separate paths toward an inevitable intersection, and they're all moving at a breakneck pace. It makes for a real page-turner... so to speak, given that I'm reading this digitally... and it's impossible to set aside until finished.

If I may digress for just a moment, this is the sort of story I crave from superhero comics. Not darkness or gritty realism. And not people being torn limb from limb - it's practically become a drinking game whenever someone loses an arm in a Geoff Johns story. No, this is just fast-paced excitement and a series that consistently leaves me wanting more. It hasn't always succeeded (see: "Olympus"), but here, it absolutely does.

I find myself bemoaning the state of superhero comics a lot these days, not just in DC but throughout the publishing world. I'm not going to nominate Smallville for an Eisner Award or anything, but it's one of a very, very small handful of series I find myself consistently looking forward to each week. And for a series that's run as long as this one has, that's quite an accomplishment.

Mr. Miller, if you happen to read this review, I know I've ragged on a few issues here and there - and I know I've yet to award you a perfect 5 - but overall, well done sir.

Art - 4: The artwork for this story arc continues to compliment the story. The narrative is full of energy, and the artwork mirrors that. Everyone is in motion, whether it's running, flying, or walking. At times, they almost leap off the page...or screen.