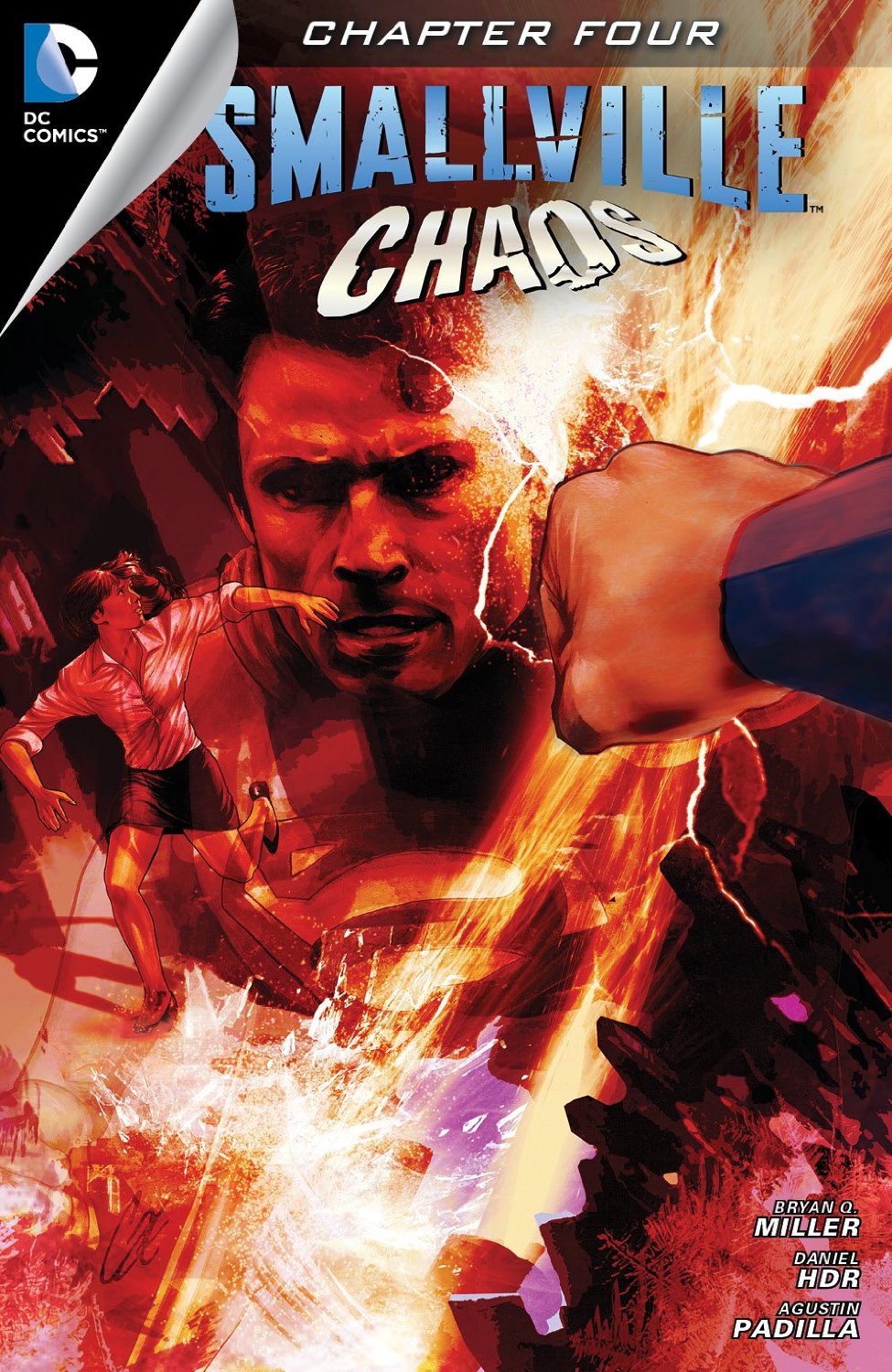 Click to enlarge
Havoc breaks loose in Metropolis thanks to the ever-growing army of Eclipsos. Tess is overwhelmed at Watchtower trying to contain the mess without Superman's assistance.

On the alternate earth, Lois tries and fails to convince her doppelgänger and others hiding out in the church to make a run for it. Her doppelgänger says there's no hope, however, and this is just the next in line of numerous attacks on Earth's cities.

Outside, Superman prevents an army of Manhunters from attacking the refugees. The Manhunters suddenly evacuate in preparation for the "purge," and Superman hears gunshots in the church. He returns and finds everyone but Lois dead - all as a result of self-inflicted gunshot wounds. They then set off in search of this earth's equivalent of a Fortress of Solitude.

Back on our earth, at the Antarctic facility, Lex - backed by his army of Yellow Lanterns - is demanding access codes for the equipment. He insists his actions are to save the world.

Booster Gold and Skeets listen in on the conversation, and Skeets tells Booster the fate of all reality now rests in his hands.

Given the doomsday scenario, I probably shouldn't have been surprised, but I didn't see the mass suicide coming. It's the sort of scene I expect from The Walking Dead or other post apocalyptic stories, but it's not typical fare for Smallville.

Frankly, I'm a little torn over it.

Despite the portrayal of a world - possibly an entire universe - in its death throes, this has been a wild thrill ride in the same vein as many B-movie action fests. (And that's not a bad thing.) This sudden turn is a little jarring.

It's not unwarranted, mind. The people involved have witnessed countless atrocities. Ending things on their own terms can certainly seem like a better option than being mowed down by Manhunters or obliterated by a death ray.

In other words, it's perfectly justified. It just seems out of pace with what's come before.

It could be Miller intends to take a hard left turn here and steer this story into a darker place, but all indications suggest otherwise. This is likely just a grim footnote to a wild multiversal epic.

My bleeding heart sensitivities aside, I still love the feeling of absolute pandemonium this story has. The sense that anything could happen fills every page. I have no idea where this story is going next, and that's fantastic.

I continue to look forward to this book every week.

And the image of Superman as a stalwart sentinel protecting the people below is exactly the way I've always felt he should be portrayed. Arms folded. Resolute. An expression that says he's not letting anyone get hurt. It makes their subsequent deaths all the more tragic, in that, in the end, the one thing Superman couldn't protect them from was themselves.

Cover Art - 3: It's an interesting cover, but it's not particularly iconic. In fact, it kind of brings to mind Superboy Prime punching reality several years back. Not a good thing.