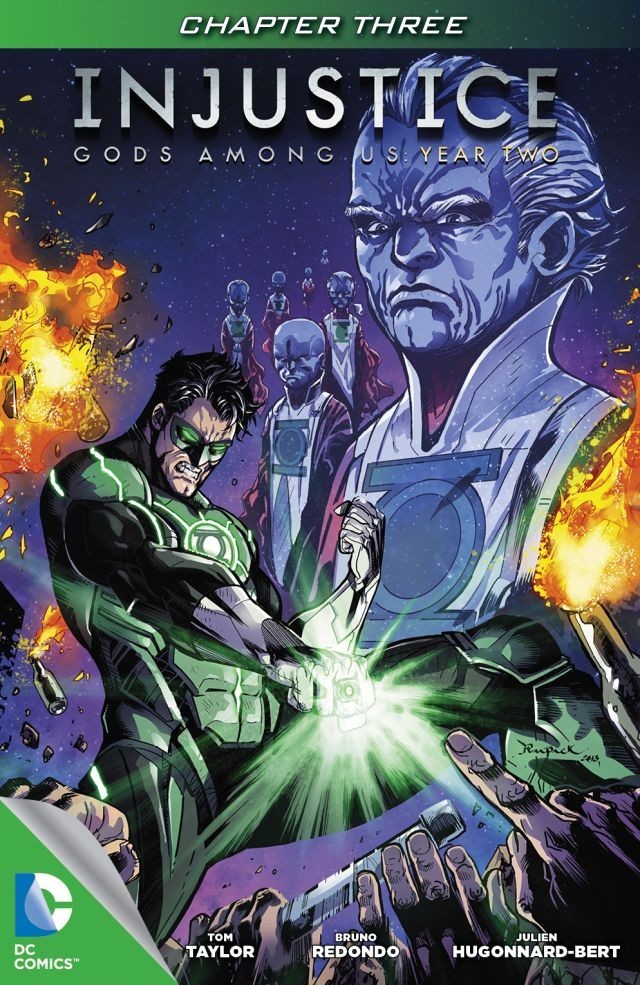 Click to enlarge
The Guardians of Universe have grown concerned by recent events stemming from Earth. Ganthet believes that the power shift on the planet requires closer investigation, and nominates Guy Gardner to do so. Gardner is in disbelief that Superman would take over the world, but once he learns that Kyle Rayner is missing, he acquiesces to Ganthet's wishes. On Earth, Hal Jordan uses his power ring to keep a test flight from resulting in a crash, something Carol Ferris reminds him that he's never done before: wear the ring while flying. Hal is then summoned to the Watchtower, where Superman alerts him to the fact that the United States congress is about to shut down the government. Superman wants Green Lantern to encourage them to do otherwise. Congress is about to declare a recess, when Green Lantern, accompanied by the Flash interrupt the proceedings and declare that no one is allowed to leave.

Story - 2: Ganthet should have asked Guy Gardner if he believed that Hal Jordan was capable of taking over the world... or the Flash... or Captain Marvel, etc. Where the story increasingly loses plausibility is that while this is supposedly Superman's downfall, a faux tragedy that has been written very unevenly, the other heroes - correction, the other super-powered heroes, fall in line with little thought as to what their actions mean, and, it also seems, with little regard for the reputations that they've built for themselves by doing good and representing the people by representing them and not their political interests. This is where superhero comic books all ways take a tumble: real world applications don't mesh very well, with beings that make most of the system that we have in our world irrelevant. It's not that hard to sort out and the fact that the outcome is all ways the same makes one wonder why readers enjoy reading the same scenario repeatedly. Is it that superhero comic book readers enjoy cyclical tales, or, worse, they do not concern themselves with literary elements so long as they're entertained.

The Guardians involvement makes little sense, especially since they cannot determine that Kyle Rayner is dead and not missing, something they're easily capable of doing. Ganthet wisely and correctly states that Earth is the focal point for a lot of the decisive conflicts that occur in the DC Universe, but since they haven't involved themselves directly in most of those conflicts, this one, which is a demonstratively localized action, shouldn't raise their interest more than any other. Perhaps Ganthet feels some responsibility for Hal Jordan, and is disappointed in a favorite GL, but Earth is home to four Green Lanterns. Conveniently, three of them are off planet when this meshugas takes place. It would be easier to strip Hal's ring of his power, something the Guardians could do easily, and quite frankly, should do, rather have a wait and see attitude of an expectant movie-goer. However, the disparity of actions isn't limited to Oa, where the powerful squander their responsibility and watch, but also to the US Congress and the Flash of all people.

Thus far, the Flash and Captain Marvel have been the Everyman of the series, hence why we don't see very much of them. However, for Flash to take part in what Green Lantern does, which is no less than a coup, makes one wonder how remarkably obtuse Flash and the rest of these heroes must be. The Fastest Man Alive has the slowest wit imaginable. How hard is it say no to what is so obviously wrong? The other problem is that the scene could have a lot more power, if we were shown how disruptive Congress is by bickering and going into recess, rather than do the jobs they were hired for. Some panels showing the disadvantaged who desperately depend on a functional government, would have gone a long way towards believing that either GL or Flash would do something like this and believe it's right. It's not that their out of character, so much as most of the players in Injustice just seem to be out of their blessed minds altogether. And we love it, don't we?

Art - 3: Derenick. Derenick. Where for art thou, Derenick?!