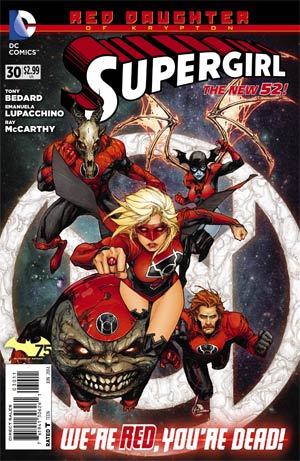 Click to enlarge
As Blaze escapes the Block to search for Supergirl, she and the Red Lanterns drive away the genocidal Diasporans, who remind Kara of the Worldkillers she had fought when she arrived on Earth, from the planet Grax. Kara Zor-El wants to go after them and any other being who would slaughter entire populations. This worries Guy Gardner greatly. Perhaps the Lost Daughter of Krypton has too much rage even for the Red Lanterns.

The Diasporans believe that wiping out an alien race would make its survivors stronger. Yet, when the Red Lanterns intervened on Grax, they were forced to abandon their mission. The Diasporan leader knows Kara Zor-El is a Kryptonian thanks to DNA scans. He intends to use her to prove the Diasporan way is the correct one. However, he may get more than he bargained for should he and his army confront Supergirl.

Guy Gardner has promised Kara, who has revealed her experiences in the blood pool to him, that the Red Lanterns will look for the Diasporans. However, first he must deal with the new situation with Atrocitus that Bleez's sudden arrival on Ysmault has thrust upon them. What Guy, Supergirl and the rest of the Red Lanterns find will be revealed in Red Lanterns #30 and Supergirl #31 as they take on Atrocitus. Who will come out victorious? Pick up those books to find out.

Story - 5: Steve said in the recent "Big Blue Report" newsletter that this story with Kara and the Red Lanterns could be an effort to boost sales of both Supergirl and Red Lanterns. This is true If one really thinks about it, the whole point of any story in comics is to sell the books. This is what writers, artists and the powers that be are attempting on a daily basis because, quite frankly, they want your comic dollar, pound, euro or whatever currency you have in your pocket. I'm not certain if DC has succeeded with the current runs of Red Lanterns and Supergirl. I haven't seen the figures. I do know Tony Bedard is putting Kara Zor-El in the right direction at this point in the series. The scene with Guy Gardner is especially powerful stuff, and his concern over Kara as a Red Lantern is handled incredibly. I have not been disappointed in what's been going on so far, and I look forward to seeing what happens from issue to issue.

Art - 5: Again, more visually stunning art is featured in this title. Even with three artists doing images, it's great. That normally throws me off a bit, but it didn't this time around.

Cover Art - 4: While this image feels more like a poster or DVD or Blu-Ray cover, it is well done. Granted, it didn't make me as curious about the book as previous ones did. However, it's still a fine cover.