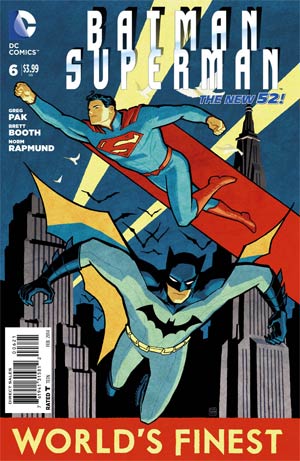 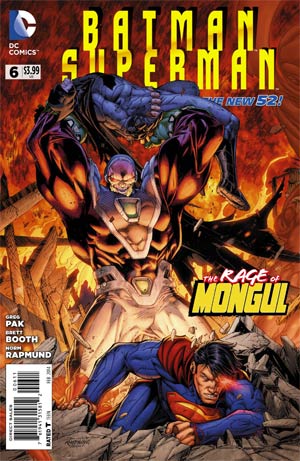 Scheduled to arrive in stores: December 4, 2013 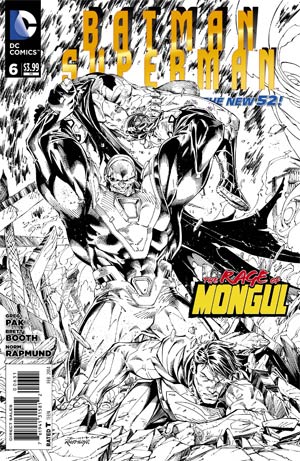 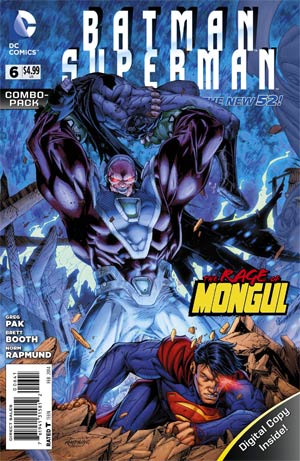 After "successfully" killing Batman, Mongul is taken into the sky by a vengeful Superman who punches the alien warlord out to sea. Superman checks on Batman, and as Jimmy Olsen still thinks this is a game, he chooses Batman as his new avatar, bringing him back to life with nanotechnology, which also gives him superpowers.

Wanting to see what Batman can do, Jimmy sends Batman after Superman only for Superman to scold Jimmy about it when Batman's new powers enable him to see the gamers. Batman then tries to destroy the machine that is creating the nanotech avatars, but Superman stops him, telling Batman that he will die if the nanotechnology is disabled as he has not yet fully recovered. Superman then sends Batman to go save civilians while he fights Mongul's spaceship.

Meanwhile, Agnes, Toymaster's ex-assistant (who is also an alien with crystal bones), launches the "game" into alpha and people from around the globe begin to control Batman from the inside out, putting him once again against Superman. As the World's Finest superheroes fight each other, Mongul admires his handiwork.

Story - 2: I'm sorry, but this story is a little, no, very ridiculous.

I know I'm probably one of the few, but I enjoyed the first arc Batman/Superman had to offer, though it was average it was a nice change. The Doomsday "Villain's Month" issue was also quite enjoyable. Even last issue I thought was really good and set up a good story, and then this issue came along...

One of my biggest complaints last month was that Pak didn't write Superman correctly, in fact, he made him act like, well, a 16 year old. Now, let me say I have nothing against 16 year olds, my own brother is currently 16, but what I mean by that is he wrote Superman less experienced, less mature, and all around awkward. It worked in the Zero Year tie-in (Action Comics #25, which I loved!), but 6 years later? No thanks...

This issue, Pak wrote Superman much better, not perfect, but much better. From grieving at Batman's apparent demise to telling Jimmy Olsen that this is not a game, I really enjoyed the Superman aspects of this issue!

On that note, Batman was written... Fine. I'm not going to say much here because it's not fully Batman, as much of him is currently nanotech, but I thought the decision to "kill" him was dumb and purely based on Pak wanting to give Batman powers, which is always cool to see, but don't "kill" Batman to do it just for shock factor. Ultimately, Batman didn't add much to the story this issue much like Superman didn't add much last.

On that note, Toymaster was so out of place in this issue, and why is Agnes working for Mongul? I feel like we need a little more explanation for this, which I'm sure is coming, but it needed to come maybe sooner so the pay-off would have been better.

In closing, I do have to say that I do like Greg Pak a lot as a writer. I loved his stuff on The Incredible Hulk and I really enjoyed his Action Comics Zero Year tie-in story, as well as (over-all) this book. Unfortunately, this issue/arc makes me miss Superman/Batman much more than I probably should.

Oh, and have I mentioned that I hate the sideways panels in the print book?

Art - 5: I really liked Brett Booth's art. It's always solid, nothing wrong with it here or any other book he does. The cover especially looks good! But seriously, those panels...

Cover Art - 5: Honestly the best part of the book this week. LOVE it!

Cover Art (Variant) - 5: I lied; this cover is the best part of the book! Cliff Chiang's "World's Finest" cover art to this book is absolutely stunning! It feels like an old Golden/Silver Age comic cover while also giving the feel of a classic propaganda poster! It's very cool and probably my favorite cover (variants and regulars) to come out of Batman/Superman. The Tony S. Daniel one from Batman/Superman #4 would be second.