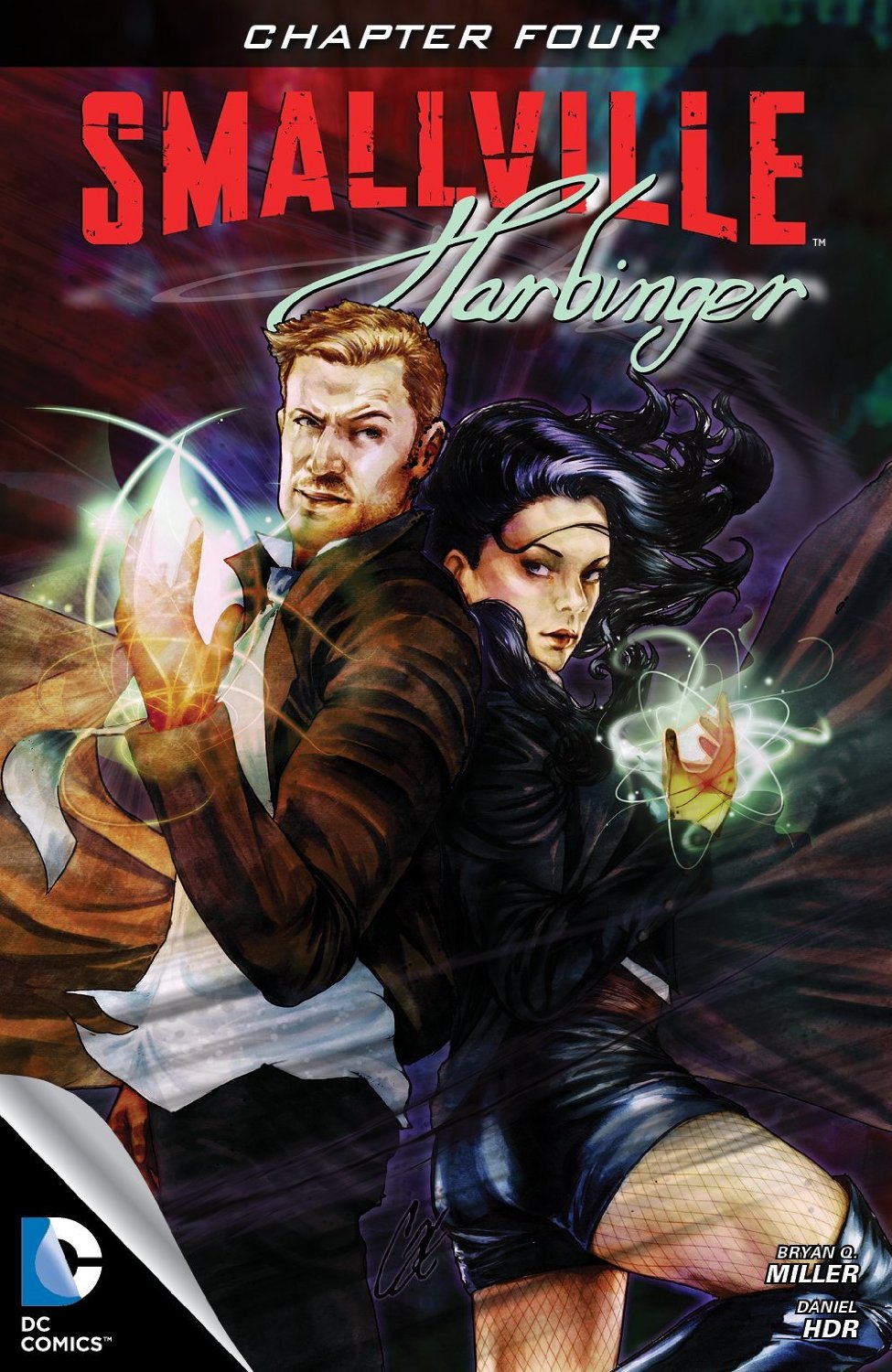 Click to enlarge
Constantine retreats to a nearby truck as things get dicey at Stonehenge. The ghosts of those he's let die in the past watch him accusingly, but he insists he doesn't care about leaving Zatanna and the girl behind. He doesn't care. He doesn't. (Sure, John, keep telling yourself that.)

Meanwhile, Zatanna is having a difficult time escaping the oncoming demonic hordes. They really want the girl she's protecting.

Constantine has a change of heart (that was quick) and hurries back to Brother Blood's body. He reaches inside the slain man's opened chest to extract one of his organs. We turn our attentions briefly to Zatanna again as he does this, but we soon return as he recites and exorcism spell that banishes the demons back to the pits of Hell from whence they came.

In the epilogue, Zatanna turns the young girl - who turns out to be Raven - over to Jay Garrick and the Teen Titans at the airport. She meets Constantine at one of the bars to share some "We'll meet again" banter, and he takes his leave through a closet.

And in an epilogue to the epilogue, Constantine reappears at his home in London, where two police officers meet him at the door saying they'd like a word with him. Constantine promptly turns them into frogs and collects their badges in a bucket already containing quite a few other police badges.

I don't want to say this story fell apart, or maybe I do? It just sort of... ends. One could blame this on the limitations of the digital medium, and they wouldn't be wrong. But for me, the climax just doesn't quite live up to all the buildup. (Which, I suppose makes it a perfect Smallville story... because, much as I loved the show, it was certainly guilty of this crime all too often.)

Brother Blood and the cultists talk about Trigon, a member of the Teen Titans' rogues gallery, but we never see him, not a single claw. All we see are a pack of generic demon monsters who are easily dispatched with a single incantation.

But even if we leave aside the weak payoffs, so much of this was just so abbreviated.

Constantine's inner turmoil hardly even registers on the emotional Richter scale. He overcomes his moral struggle in about a second and a half. And the final confrontation with the demonic horde lasts roughly a second longer.

Giving credit where it's due, however, the epilogue with the Teen Titans was nicely done. The girl is revealed as the well known Raven, which leaves me intrigued for more stories involving the Titans in the future.

The scene with Zatanna and Constantine afterward? Not so much. The dialogue just feels forced and awkward. It leaves me scratching my head wondering what happened. This is the series that's giving a fantastic take on Lex Luthor and Clark Kent. What went wrong here?

Art - 4: The art remains on the same level as past entries. (And it looks like Zatanna's sticking with the longer trunks instead of the shorter ones she started this story with.)

While none of the monsters are particularly unique, they come across quite nasty and menacing. So they're doing their job. And the visual homage of Raven's shadow in the epilogue was a nice touch.

Kudos on another nicely drawn issue.