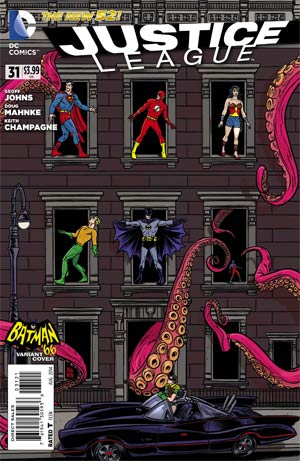 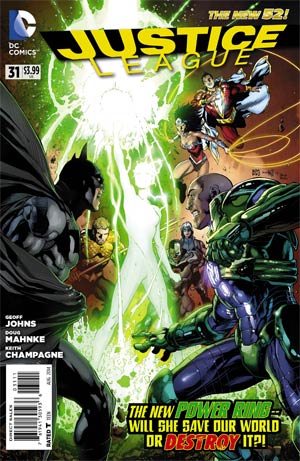 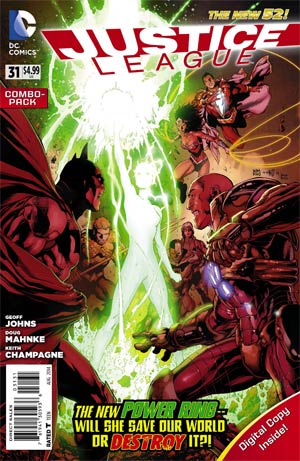 Inside Wayne Manor, Lex Luthor is convinced that Bruce Wayne is in fact Batman, up until the point that he actually pulls a gun on Bruce and fights him and Alfred, ending with Lex finding the entrance to the Batcave itself.

Meanwhile in the new Watchtower, Cyborg and Shazam are on monitor duty as the other members of the League are searching for Power Ring's missing ring. In an effort to find the ring, Shazam creates a ping pong table, which he and Cyborg begin to play. In Metropolis, Lenard Snart aka Captain Cold arrives at LexCorp as Mercy Graves begins to evaluate him.

At Wayne Manor, Lex tries to convince Bruce to let him join the Justice League to help them protect Earth from whatever destroyed the Crime Syndicate's homeworld, to which Bruce refuses. Elsewhere, the new Power Ring, Jessica Cruz, begins to tear apart her home town as the Doom Patrol, with Element Woman within their ranks, shows up to take her down.

Story - 3: First off, sorry about the delay of this review guys! I've been in the process of moving from my home in Chicago out west to Montana over the past few weeks and I am still not completely caught up on my regular reading list. So, I apologize for the lateness. The funny thing about this issue is that a lot happens while nothing happens...

Lex Luthor finding out that Bruce Wayne is Batman is a very interesting plot-line to put into this book, and I'm really excited to see how Bruce handles it from this point out. I thought the fight between Bruce, Alfred, and Lex was very cool and Lex using his intellect to determine where the Batcave is was very cool! I'm really looking forward to seeing what Lex's ulterior motives are here. I truly do believe he wants to save the universe from who we know as the Anti-Monitor, but as Superman fans, we all know Lex always has another motive and another plan besides what he reveals on the surface. And just like us, Batman also realizes this, which pleases me because I hate it when Batman and Lex are not seen as intellectual equals.

I know I'm probably going to get in trouble for that last statement, because I know there are a lot of Lex Luthor fans on this site, I myself am one of them, but if we're going to be completely honest, Bruce Wayne and Lex Luthor's intellects do in fact rival each other, and although it wasn't the main focus of this issue, I liked that underlying theme.

I'm not a big fan of the Power Ring plot-line at all, but I think bringing the Doom Patrol in (along with former-Leaguer Element Woman) is going to be pretty interesting.

I also am really enjoying the friendship that's developing between Cyborg and Captain Marvel (yes, I know he's Shazam now but I refuse to call him that outside of the summary of the issue above). With The Flash seemingly leaving this book due to Captain Cold's eventual induction into the League, we won't have the Flash/Cyborg friendship like we did after Green Lantern left the book in issue #12. Point being, I like what they're doing here and I think they did a great job with it in the Justice League: War film (based on the New 52 Justice League) as well.

Speaking of Captain Cold, I love the character, and to see him as a hero now is very interesting, and to be honest as someone who's read The Flash books (both Post-Crisis and current New 52 runs), his character has been building up to this for a while. It's good to see him in a Justice League book, though like Luthor, I hope he doesn't stay too long as I still love Superman and The Flash on this team.

Ultimately, this issue doesn't do a whole lot outside of transition from last issue to next, but it was a needed issue after Forever Evil. Onto next month!

Art - 4: Not much more to say other than I really love Mahnke's artwork, especially how he draws Cyborg and Captain Marvel (and their ping pong table!)!