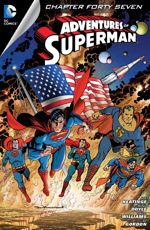 Click to enlarge
Rathotis morns the loss of his world. Kamandi tries to comfort him. But the king refuses to be reassured. Where is Superman? Why isn't he here to help?

Why is there never a Superman around when you want one?

Superman wasn't just sent here to save us, Kamandi explains. He was meant to inspire humanity. To prove it, Kamandi continues to tell the tale of Superman.

We see Superman throughout the ages... battling Brainiac, being found by the Kents, looking at the bottle city of Kandor, saving Lois Lane...

We end the pilgrimage through Superman history at 2013. Here, Superman and an aged Lois Lane are meeting to help the world (and universe) celebrate 75 years of Superman! A stadium surrounds a huge statue of Superman! Yes!

And the stadium is filled with Superman's friends, family, admirers from other planets, and gods and goddesses both new and old. Ever humble, Superman isn't too comfortable with all the attention. But he waves to the crowd. As he does, granny Lois plants a big ole kiss on him and tells him that we all love him.

The celebrations wasn't real. Mxyzptlk is behind all this! He uses the giant Superman statue to talk to and mock Superman. Superman whooshes away the statue into space. Then, Superman says his own name backwards and goes into the 5th dimension. Mxy follows.

What happens next is like taking a psychedelic acid trip to... nowhere. As Superman and Mxy float around in the 5th dimension exchanging banter, they look through the whirling colors to see the missing Phaethon from part one of this story. Superman tries to free the rocket from the multi-dimensional grasp that is holding it outside of time, but he finds that he cannot free it.

Mxy tells Supes that he cannot help the victims locked in the lost Phaethon... yet. There will come a time when he can. But not now. Not today. Breaking the 4th wall, Superman gives a confident wink to the reader.

In the future, Rathotis is not impressed with Kamandi's story about Superman. In Rathotis' eyes, Superman failed. What sort of inspiration is that!?

But Kamandi points out that Superman never gave up. Kal-El saw hope in every circumstance. He learned from his mistakes. He knew there was always a way. Superman could not save those astronauts in the past, but he will save them some time in the future.

And as Kamandi, Rathotis and their crew rocket off into space (using Red Kryptonite as jet fuel), Superman is seen to be watching their escape.

Earth explodes. But as Kamandi says, with Superman, there is always a way...

Story - 4: The Good: The ending is powerful and hopeful. Even in the midst of such tragedy, seeing the Superman cape and boots as the Earth is destroyed lifts the heart, and the reader knows that this is not the end. But just how is Superman going to save Earth? Kamandi knows that, if anyone can, Superman can. (Yes, I just made a very bad reference to the 'The Candyman Can' song. Sue me.)

Seeing Mxyzptlk is wonderful. Superman was happy to see him, and so was I. Mxy is a villain that has to be conquered using the power of intellect. Because of him, we often see that Superman isn't just a galactic brawler, he's also smart. That's why Mxy is my favorite villain.

I'm not sure why Keatinge chose to tell the story of 'Superman throughout the ages' in this manner. But the more I read, the more I like it. I also like Kamandi. Kamandi is a character that has obviously been inspired by Superman. And because of that, he has hope.

"You've Got Me! Who's Got You!" My little geek heart just loves this line. Best Superman moment in all of time and space...

The Bad: I wish I knew what caused the Earth to explode. I imagine it has something to do with the loss of the Phaethon in the beginning. We'll see in part three.

Rathotis' pessimistic attitude is starting to get on my nerves.

Art - 3: Mxy looked great, and I liked how the artists drew the 5th dimension. Seeing Superman in his many incarnations was fun. However, I don't like the 2013 Superman look. His face is too long and goofy looking.