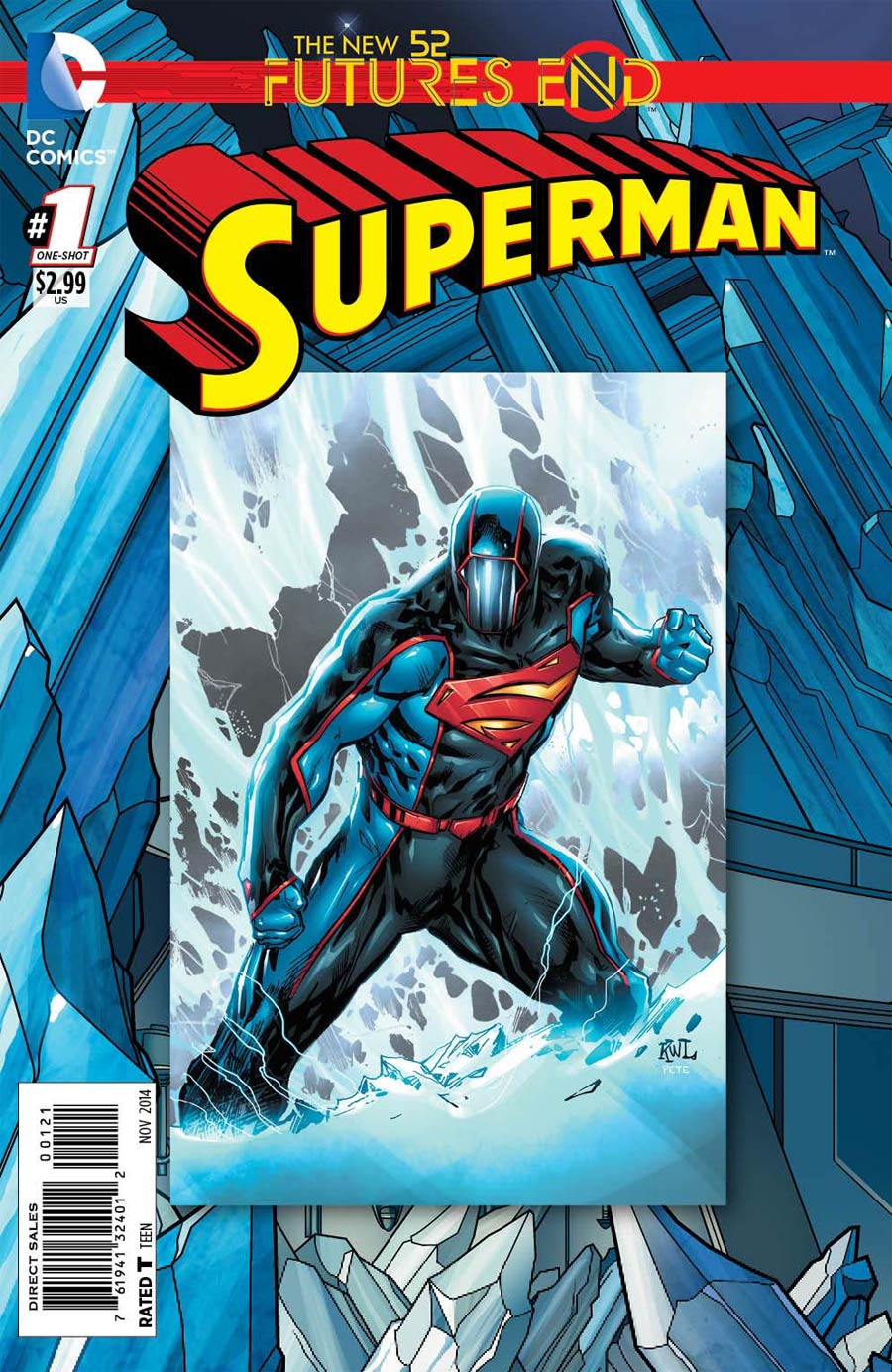 Click to enlarge
Five years after the story of Ulysses and Superman...

Two teens from Starling City arrive in Metropolis keen to party and spend their gambling winnings. A shadowy man grabs them and throws them into the path of a train.

In the Centennial Park District the masked Superman rescues two children from a burning building, the last of many he has rescued from the inferno.

A fire fighter steps forward and demands that he reveal why he is impersonating Superman. The Masked Superman snaps and yells at them for their ungratefulness and soars away.

Later Lois is following up on her expose and tracks down the Masked Superman to his apartment and offers him the chance to tell his side of the story as to his masquerade.

Billy is angry that Lois made him look like a liar and a fool in her story, but Lois coldly explains her job is to report what she saw and she saw Billy Batson become the Masked Superman. Lois asks a question: "Why do you feel like you owe the world a Superman?" Billy explains the flaw in her question, he owes the world nothing, but he owes Superman himself.

Billy recalls a fight years ago in a war with Apokolips. The war had led to Black Adam and Shazam fighting side by side against the hordes but when Adam saw that Shazam might fail and with him the power of Shazam would be lost he double crossed Billy and attempted to steal his power and kill him. Superman however arrives in the nick of time and saves Billy's life. Superman activates a Phantom Zone projector and ends Black Adam's threat immediately.

Superman advises Shazam to rest but Billy refuses pointing out that France is about to fall. Superman, downhearted tells Shazam he cannot help as he has another mission, one that deeply sickens him. Billy offers to help but Superman tells him that "He" has ordered Superman to complete the mission alone. Superman soaring away is the last Billy or anyone ever saw of Superman ever again.

Lois is troubled by this and the only solace is that whatever Superman's secret mission was it won them the war, but nobody knows what Superman had to do or where he vanished to, and if they did they are being silent. The Justice League were worried that because the world looked to Superman as a sign of power and hope, if it was lost, hope would die out and as Shazam was the closest in powerset to Superman they asked for him to step in.

Though Lois notes his noble attempt, she points out that he is devoting his own life and existence to the memory of Superman instead of living a life and maintaining a real identity. An emergency cuts the interview short and Billy has race to the train wreck. The shadowy man that killed the teenagers reveals himself to be Ibac an old enemy of Shazam's who had believed he was dead. Ibac, newly powered by magic is now super strong and fights Billy to a standstill before throwing train carriages at the nearby public.

The leaking gasoline gives Ibac the idea to light it which results in a major explosion. Billy grabs Ibac and soars skyward with his foe. Ibac laughs that he is invulnerable, he can't die. Billy points out that though the fall from the far reaches of Earth's atmosphere won't kill him, it will still hurt and knock him out.

Lois arrives having watched the battle, she tells Billy that though he isn't really Superman he is just as effective.

Billy reveals that for years he fought Superman's villains but after the article, Ibac came hunting for HIM not Superman and though Lois has given her blessing for him to continue masquerading as Superman in his honor, Billy reveals the recent events have led him to a conclusion: The world needs Shazam.

Billy now in his old identity flies away and tells Lois he will make sure nobody forgets Superman but that the world needs to remember it has other heroes besides Superman.

Story - 4: It was a good story showing parallels of Shazam and Superman, their ethos, their power, their symbolism.

The problem is... I don't care. I want Superman. No matter how good or honorable Shazam/Billy can be that's who he is - not Superman.

I liked that in the end he embraces his identity and goes on with the good fight, I'm not sure why the public was actually as hostile as they were despite his actions but then as I said this Five Years Later stuff is constricting and I would like more investment in the character in the here and now. I don't like that the story I'm actually interested in with Ulysses has to go on hold to push another series.

As a story ABOUT Superman it's a success... it really is but I expect nothing less from Dan Jurgens. As a story IN the Superman title it just shows Lois to be a frost queen and Billy the victim of self esteem deficit.

Art - 5: Lee Weeks delivers some brilliant artwork. The inferno is particularly eye catching and composition is top notch stuff. Would have liked to see Weeks get the chance to draw more Superman to be honest, maybe when Futures End releases its strangle hold.

Cover Art - 3: I understand the concept of now and five years on but I'm getting bored of it, it's quickly heading towards Deadpool cover gimmick territory.

This cover is nothing more than just... ok.