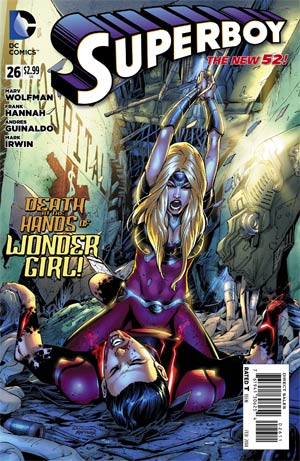 "To Hell and Back"

Click to enlarge
Jon stirs in the mental plane only to be attacked by a horde of monsters. A disembodied voice makes contact and mentally chides the teenager. The attacks intensify until he awakens in a medical facility. Cassie, Wonder Girl, is sitting at his bedside. Jon instinctively attacks her and while clutching her throat he burrows into her mind to discover what she knows of Kon-El, Harvest and himself.

Cassie mistakes his disoriented attack as maladjustment and tries to reach out to whom she thinks is Kon. She explains it is the year 2933 and that the Teen Titans are with them. Jon can barely keep up, clearly weakened he decides to go along with their mistake and assume Kon's life until he is fully powered. As guards arrive, a severely weak Superboy collapses with his mysterious telepathic companion continually goading him.

When he awakens Solstice, Raven, Red Robin and Wonder Girl are all present along with a doctor running tests. To avoid the equipment scanning him he destroys the equipment with TTK. Jon requests some time to rest so the Titans leave to release Kid Flash but Raven notices something isn't quite right much to Jon and the Voice's dismay.

Seconds after Kon's friends leave he scans the building with TTK to discover where genetic tests on him are stored and quickly makes his way there. Jon uses new abilities on his way to the genetics lab and forces dizziness upon an interfering nurse, shattering security cameras from tracking him and using yet another power to make himself invisible to any people around him.

There are a lot of guards on duty, protecting a meta doctor in the lab and Jon navigates past them cockily coming face to face with the meta inside. The voice urges him to kill and brainwashing words from Harvest force his actions as the doctor begs for mercy. Jon quotes Harvest as he crushes the life out of the meta and is surprised to find he absorbs dead meta energy to become more powerful.

Using the doctor's dead body he activates the genetic and historical archive and scans through it. He finds that Superman is indeed his father but that his mother's DNA cannot be identified due to anomalies in time, so though Lois was definitely his mother before, actions meddling in time have either altered that fact to many mothers with multiple meta DNA strands.

Jon decides to chart Superboy's history and achievements to discover that Kon is recorded as a huge force for good in the 21st century and would even go on to be a founding member of the greatest peacekeepers of the future... The Legion of Superheroes!

Hearing this both Jon and his mystery guide share gleeful evil thoughts...

Story - 5: The comparisons with Superior Spider-Man are inevitable.

This is quite clearly an attempt to emulate that but it has a few twists to keep it fresh.

The endgame is predictable in an almost 'Despicable Me' style from the offset but I will enjoy the ride. The clone stories were a roller coaster of bad to good, to great to awful, so anything different is welcomed. The anomalies in time and the telepathic force manipulating him mean that we can be sure that the canvas is going to be unique and entertaining.

It is still going to be entertaining to read and I hope many will give it a chance from this issue onwards, I hope that Marv Wolfman tries a different approach than Dan Slott did with the 'I'm biding my time till I can rule the world' and knowing so much of Wolfman's past work I have every confidence that the Lobdell mess will be swept aside as quickly as possible and that Superboy will become one of DC's notable books.

Art - 4: The art is a breath of fresh air, with clean line work and some great physical movement illustrated. There is still a bit of dead space in backgrounds and the invisibility effect lacks the 'wow' factor it could have had. It will be nice to see it develop.

Cover Art - 4: A cool cover but more of what we've seen before. It being the debut of Jon as an evil Superboy disguised as the good, it would have been nice to see him in a triumphant pose rather than taking yet another beating.