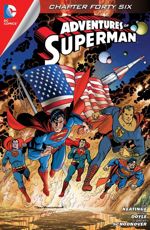 Click to enlarge
It looks like in this series readers are going to be taking a ride through Superman history.

'Strange Visitor' begins in the future. Here, inhabitants have fled a dying Earth. In this post-apocalyptic world, the animals stand upright, and it is they who rule the planet (think Planet of the Apes). Meanwhile, all humans have reverted to animal-like ways - except for one man named Kamandi.*

Kamandi and America's last king, Rathotis (no kidding, that really is his name) are the last to leave the planet. Rathotis, by the way, looks to be fully upright 6 foot cat-like creature.

Not sure why 'rat' is in his name, but okay.

As they prepare to leave Earth, Kamandi wants to say one last good-bye. He is hopeful that one day they will return. Rathotis is not so optimistic.

To give Rathotis hope Kamandi turns towards a statue of the long-ago hero, Superman, and begins to tell the story of Kal-El, Last Son of Krypton...

It's 1939. Superman, in his 1939 suit, and Batman are fighting Frankenstein and his ghoulish horde. The back and forth dialogue between the two heroes reminds the readers of the competing optimistic/pessimistic divergence between them.

Later, Superman and his friend, Professor Potter discuss how Superman has inspired humans to enter the space age. If the Last Son of Krypton can reach Earth, maybe there are more beings out there. And it is Earth's turn to reach out to them.

Superman and Professor Potter watch as a rocket ship is launched just outside of Metropolis. But something goes wrong, and as Superman tries to save the rocket, it disappears. Everyone thinks the astronauts are dead. But there is no debris that accompanies an explosion.

That leaves Superman with hope that he can still save the astronauts. For Superman, there is always a way...

*This part isn't explained in the story. Kamandi was a character created by Jack Kirby in 1972.

Story - 3: The Good: A Superman story that begins... well... at the beginning is a great idea. I'm not sure why Keatinge began the story in the future rather than in the past. But I'm willing to go along for the ride. Kamandi is an interesting character, and I was happy to be introduced to him. Again, I'm not sure why he was used as a story-telling device, but as the story progresses, hopefully that will be explained.

In 1939, Superman did not fly. He was able to leap over tall buildings with a single bound, but he wasn't flying yet. I suppose, at the time, the writers could only conceive of a man who could jump up to the sky, but gravity would eventually bring him back down.

Throughout Superman history his powers grew. I can't wait to see what Keatinge does with Silver Age Superman. SA Supes had almost unlimited powers. It will be fun to see where the writer takes us.

Batman has guns!! Actual guns! I love this. Batman fans everywhere will faint at the sight! LOL!

The Bad: Turning the virtual 'page' on Comixology and seeing a full grown man talking to a 6-foot cat was a bit shocking. All I could think was, "What the hell!" Even after I did my research and realized who these characters were, I was still a bit stunned. The event took me out of the story. I think I would have enjoyed it a lot better if there had been some sort of expositional lead up to that first scene.

Art - 3: The bright 'yellow' colors at the beginning and ending of the story are a bit jarring. I know the artists were differentiating between the different eras, but why is everything in the future yellow? Grandfather Kamandi was a bit overdone. However, I do like the 1930's style. Those colors are hopeful and though a bit muted, evocative of the time period.