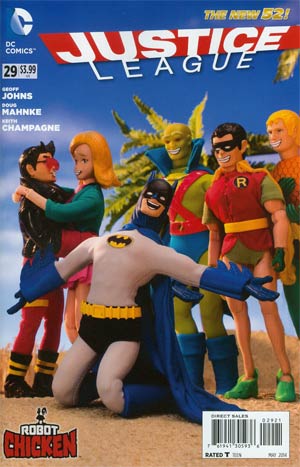 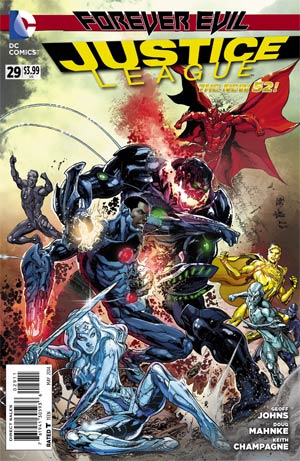 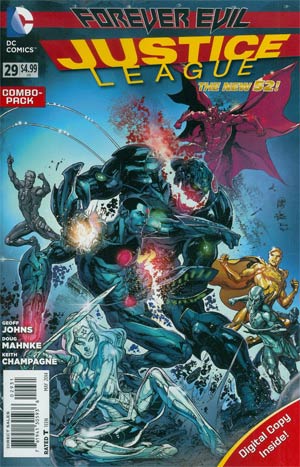 After re-activating the Metal Men and explaining why Grid has to be defeated, Cyborg, Will Magnus, and the Metal Men take Grid head-on. After calling the Secret Society for back-up, Grid faces Cyborg in the Digital Universe for final combat. After Cyborg, now truly realizing that he is the bridge between man and machine, defeats Grid, Steve Trevor and Killer Frost appear. Steve hands Cyborg Wonder Woman's Lasso of Truth right before he's electrocuted by the Secret Society's reinforcements. Cyborg tells the Metal Men to continue the fight as he is going to go save the Justice League.

To be continued in Forever Evil #7.

Story - 5: Oh it's good to be back! It's been two months since an issue of the New 52's headline title came out, and boy does it deliver. In this issue we have the Metal Men, finally reactivated, in action! We have Cyborg 2.0 now going up against his outdated doppelgänger Grid! And we have a small cliffhanger leading us into the final chapter of the Forever Evil saga that, I think we can all agree, has gone on a little too long.

That being said, I've said in earlier reviews of this book's Forever Evil tie-ins that Victor Stone has finally come to terms with himself being man and machine, which I loved. But I don't think it was until this issue that the cycle has been completed. In the Digital Universe, he saw himself as human, but then when Grid, who represents his machine half, kills the human version of Victor, Cyborg reappears. Victor knows now that he's no longer Victor Stone, and that he's never been Grid, but that he is Cyborg, the bridge between the two. I loved how that was handled in this issue, especially with the Superman-esque chest-rip.

I also liked that the Metal Men were not the main focus of this story, yet they played a very important part. Going off of that, I also really liked how Cyborg defeated Grid because I think it gives him the victory while still leaving it open for his arch-nemesis to maybe return one day.

In closing, all I will say is that I was very, very satisfied with this issue. It brought everything that we wanted from Cyborg's story here to a head and really made sure that it tied up all loose ends, with the exception here being the rest of the Justice League, who we'll see again in Forever Evil #7.

Art - 4: I really love the way Mahnke draws the Metal Men and Grid. He does a really good job with robotic-type characters, especially with Cyborg during the chest-rip panel.

Cover Art - 5: I really like this cover art! I love how each of the Metal Men is a different member of the (original) Justice League. Nice throwback.

Variant Cover Art - 5: Now this is a variant cover I can appreciate! On a side note, I'm really looking forward to finally watching the second Robot Chicken: DC Comics Special, if you couldn't tell...