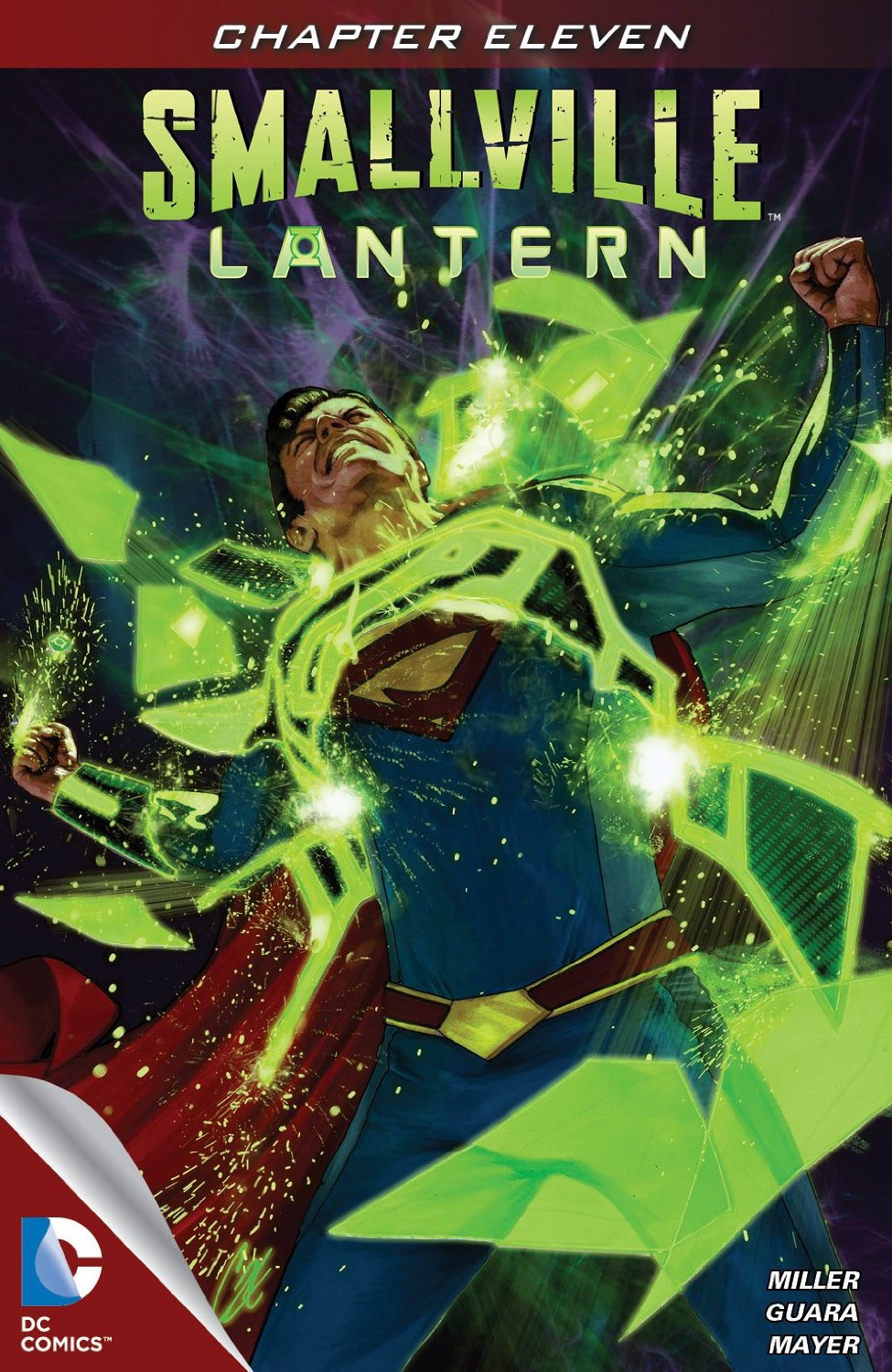 Click to enlarge
Prometheus arrives in Fort Knox via Boom Tube, but Green Arrow is waiting for him. A one-on-one battle ensues, and Ollie gets the upper hand thanks to a massive headbutt.

In Gotham City, Batman battles with a Yellow Ring-enhanced Firefly. Firefly collides with a building, which prompts the ring to abandon him and search for a new bearer. Batman is its first choice, but Batman "convinces" it to take its time examining him and uses the opportunity to analyze it. The data is sent to S.T.A.R. Labs, and Emil Hamilton says he's isolated the rings' frequency. While they can't turns the rings off, he says they can reboot them. Unfortunately, that would also reboot any Green Lantern rings in the area.

The plan works. The rings reset, and all the Yellow Lanterns are momentarily paralyzed. Superman tells John Stewart to get back up because, "We aren't done fighting yet!"

Story - 4: This was a fast-paced issue, even by DC Digital standards. Everything but the battle with Prometheus (we'll get back to that) revolved around the plan to deactivate the Yellow Rings.

I liked Batman's moment with the Yellow Ring attempting to recruit him, which is surprising since I'd been hoping that would be left alone. Granted, his comment "Take a deeper look" could've been merely a stall allowing him time to analyze the ring, but it very likely is a suggestion that there's more to Batman than darkness, vengeance and fear. Beneath the facade of the Dark Knight's persona, he may still be that lost boy in the alley hoping for a better world.

Simply telling the ring to stop in order to analyze was a little convenient, but hey, it's Smallville. Or maybe we'll just adopt the "because he's Batman!" justification.

I'm a little confused over Superman's injury, though. I assumed he'd been impaled by a Yellow Ring-constructed broadsword last issue. Once the rings reset, however, he's uninjured. His clothes aren't even torn. I'm not an expert on all things Green Lantern, so I'll have to leave that to other fans to explain whether or not that should've worked.

With only one issue left, I don't see how this story can resolve the battle with Parallax and explain the heists of Prometheus. I'm beginning to suspect they're unrelated, and Prometheus was just tossed in to give Oliver Queen something to do. So far, he's served no other real purpose. At this point, he's not connected to Parallax or the Yellow Lanterns in any way, and the technology he's using (Boom Tubes, for instance) are traditionally from Apokolips.

I suppose we'll find out next week.

Art - 4: This issue offers up another round of very good artwork. Parallax looks just as awesome as he did before. And the artwork accentuates the story's momentum with kinetic imagery. With only a few exceptions, every character in this story is in motion - running, jumping, flying, attacking. It's dynamic and effective.