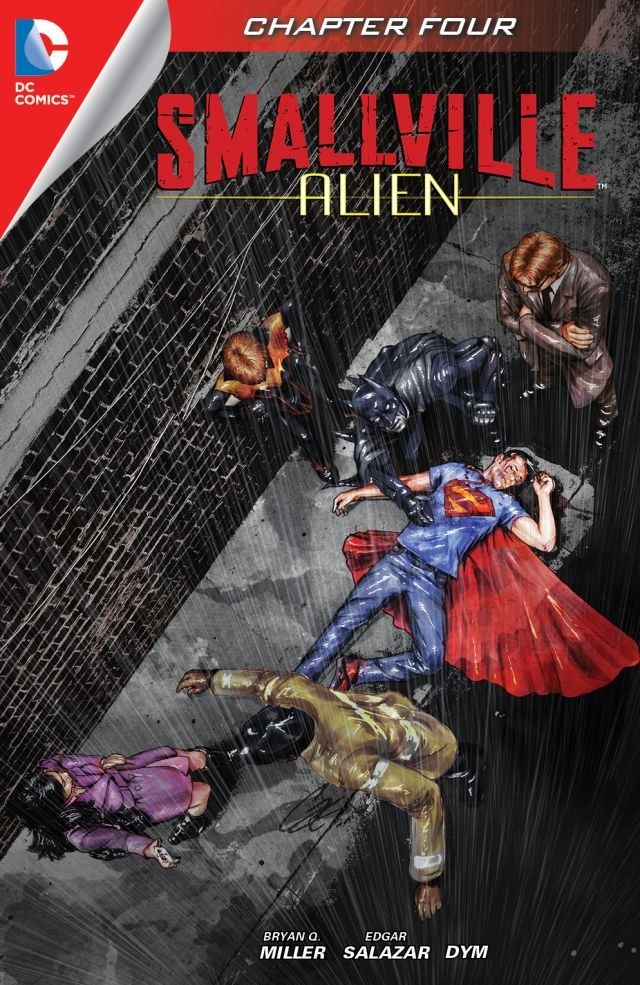 Barbara Gordon is in a hurry to get somewhere. She's in such a hurry, she needs to cut through the back seat of a cab and into an alley. (I guess running around the car wasn't an option.)

Elsewhere, in an empty warehouse, some nameless low-level criminals with playing cards are playing a round of "What Else Can We Do To Make This A Bigger Cliché?" The party ends abruptly when Batman crashes through a window overhead and lands less than gracefully on their table.

Turns out he isn't there for them, though. Bane makes his debut in the Smallville universe, ready to duke it out with the Dark Knight. A vicious brawl ensues, and for a moment, it looks like this miniseries will turn into a Smallville'd "Knightfall"; however, the Batmobile crashes through a wall and into Bane. Barbara - now dressed as Nightwing - enters the scene and finishes Bane off with a pair of electrified kendo sticks. Or are they actually nightsticks? Or batons?

Then, the Bat Signal summons them.

Commissioner Gordon calls Batman and Nightwing to the scene of an apparent hate crime, where a man dressed as Superman (a la Grant Morrison's early New 52 Action Comics issues) has been beaten to death.

And in Metropolis, Lois tells Chloe she's got a "low-impact hero-like experience" that should be right up her alley: They're going to Gotham City! Don't all horror movies start the same way?

Story - 3: If I were to give this issue its own title, it would be "DETOUR AHEAD!"

Apart from the last four pages, nothing in this story had anything to do with the ground we've covered so far. I get that we haven't seen Batman for a while and it's nice to give him a bit of a reintroduction, but it would've been nice if Bryan could've weaved that into progressing the story forward. Don't get me wrong; it was a fun reintroduction, and while I ragged on the super-cliché warehouse scene a bit, I got a kick out of it. Seeing Bane was cool, and teasing the "Knightfall" moment was a clever touch, but you could skip that entire scene and not miss any part of the "Alien" story.

Unless Bane somehow plays into things later. I doubt it, but due to that possibility, and the fact that I enjoyed the scene, I'm only knocking off one point.

Now I kind of know how Marc Pritchard felt waiting for "Crisis" to finally start. (That joke's probably run out of mileage by now, hasn't it? I promise, that's the last time I'll use it.)

Despite the lower score, this was still a fun issue. I'm just disappointed the fun stuff is ultimately forgettable.

Art - 4: The art is just as good as always. Edgar Salazar's take on Batman in the Smallville universe is unique from the other versions currently in comics - and making it your own is often a good thing (no "Man of Steel" jokes, please!) - and it's a look I can easily see being utilized had Bruce Wayne ever appeared on the television show.

I am curious about one thing, though. In the Smallville universe, does Bruce cover his face with black facepaint before suiting up?

Also, the victim dressed like the New 52 young Superman was a nice touch, in my eyes. I haven't enjoyed much of the New 52 (translation: I pretty much hate it), but I liked Morrison's young Superman, and I liked that look. I don't know why, but the jeans and cheap cape just worked for me. It was nice to see it used here, as it makes sense that a supporter would wear something low-rent like that.

Cover Art - 5: I usually reserve a 5 for something that really resonates with me. This cover did. It's a big shift in tone from previous ones, and it stays with you after seeing it. Plus, and perhaps most important, it does exactly what an effective cover should do: make me want to read what's inside.