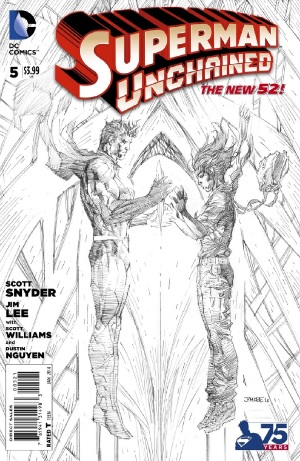 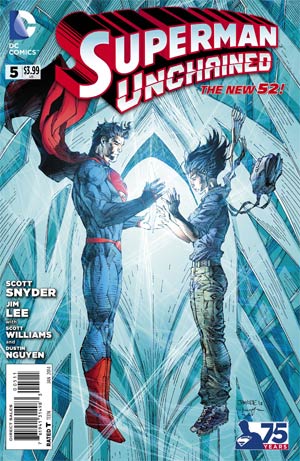 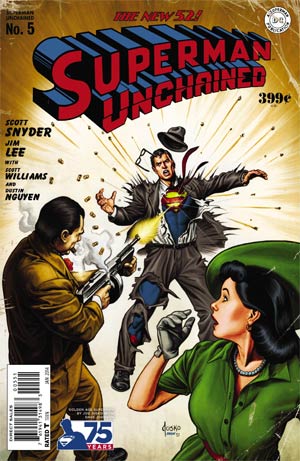 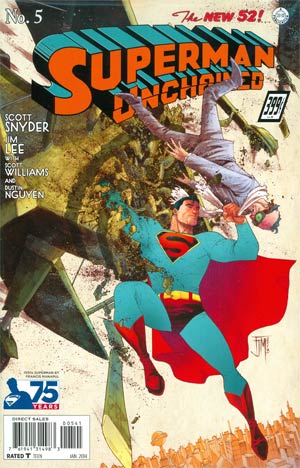 First, let me apologize to you for the delay in this review. There was slight confusion on my part as to who would be reviewing Superman Unchained #5. The holidays certainly didn't help in reducing this confusion by any means. That being said, allow me to wish you all a belated Happy New Year. Even though this is Batman's 75th year in comics, which will undoubtedly be celebrated vigorously by DC, I still have high hopes for our boy in blue. The direction that Superman Unchained is headed is at the forefront of my optimism.

During the transition of reviewers, I spoke to Marc at length about the expectations of reviewing this comic. One thing he said to me during our correspondence was, "I argued that if Supes was unchained, reviews of the title should be too". That stuck out to me, as I had all but completely abandoned Superman in comics with the distinct exception of Adventures of Superman and Smallville. That one statement alone may have altered my perception of the New 52 Superman, and certainly reinvigorated my desire to pursue Scott Snyder's purpose with Superman Unchained. So, I will attempt to keep these reviews in a familiar format, but I hope that those of you that are reading will allow me the leeway to be flexible with these reviews as I attempt to find footing in my own style. I invite any and all criticisms from you all, just be mindful of the member rules. On to the review...

Our story begins, or continues rather, with a beautifully illustrated flashback to an unspecified year with a young Clark Kent and Lana Lang playing atop a silo. Lana slips and both begin to fall. Clark catches her and they are unexpectedly suspended in midair. This leads into the present with Superman taking Wraith to the Fortress of Solitude. Meanwhile, Lois has been captured by Ascension, who reveal even more about their origin and details on Wraith. It is explained that Wraith gave humanity an equation that in turn allowed us to create all of our current technology. The sum of this equation is referred to as "Earthstone" which will allow Ascension the ability to take control of anything created by the equation.

Back at the Fortress, Superman is attempting to track an energy signature that will hopefully lead them directly to Ascension and Lois. Wraith begins to question the technology within the Fortress which eventually leads into a philosophical discussion about Superman's purpose and the inevitable futility of his dual identity. In a twist, Wraith reveals that he presumably tricked Superman into leading him to the Fortress per General Lane's orders, and intends to neutralize Superman and confiscate all weapons and technology. All of these story threads are juxtaposed with the flashback sequence of a man, Mr. Colder, who witnessed Clark hovering on his farm, and how his fear and paranoia causes him to take drastic measures in response. At the end of the story, Batman reveals that Ascension has launched every nuclear missile on Earth. 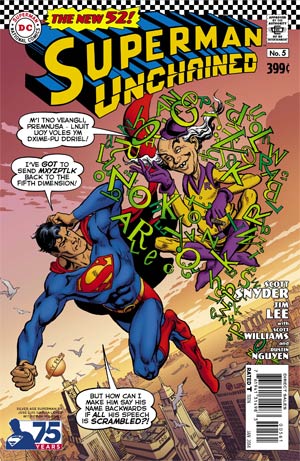 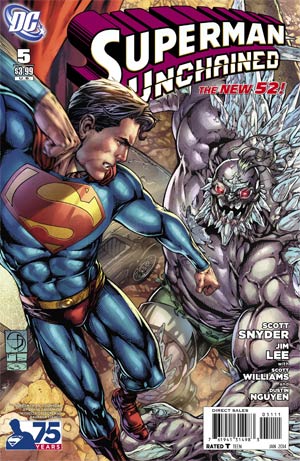 Story - 3: Snyder has said on multiple occasions that if he had one Superman story to tell, this would be it. Even though I believe this story might have been better served in its own continuity, I'm interested to see how it fits into the already disjointed continuity presented in the New 52. The answer to what Snyder intends to "unchain" Superman from seems to be... Clark Kent. At the very least, that's where this issue seems to point its finger.

I might have given this issue a 4 or 5 had it tied into what was set up last issue with Lex (who was sorely missed), or if I felt the flashback played a little better into the action of what was taking place in the present. As it was, I suppose the flashback was an attempt to parallel the point Wraith was attempting to make about Superman's place in our world. Specifically speaking, hiding his powers behind the secret identity of Clark Kent and how it hinders our hero by the chains of an assumed identity. This point however, was completely lost on the fact that Mr. Colder was already prone to overreacting due to his implied hallucinations and there is no guarantee hiding behind the identity of Clark Kent had any bearing on consequences presented in the scene. Unless, I missed the intent, in which case something flew right over my head and it wasn't a bird, a plane, or Superman.

As for my feelings on Wraith and Superman's relationship, I get a Dark Knight Returns sort of vibe from it only in reverse. Now it's Superman that's not trusted by the government, and a bigger and stronger opposition is on his coattails (or cape). I really am enjoying the contrasting points of view, and this is where I feel Snyder has excelled with Superman Unchained. I'm very intrigued to see what will happy next issue now that Ascension's plot is fully in motion. Will Wraith ignore orders as he has done before to assist Superman or has the Man of Steel been given a challenge on a scale larger than he may be able to handle?

Art - 3: I'm not the biggest admirer of Jim Lee anyway (I still loath his New 52 designs), but I really have to ask, what happened? The hatching, crosshatching, and overuse of line were worse than ever this issue. I was genuinely distracted by it. Lee has always been good at posing our heroes. This issue was no exception; however his pages with Ascension appeared very rushed in comparison.

I brought up the art an entire point due to Dustin Nguyen, whose flashback scenes were engaging and dreamlike. Normally, I'm not a fan of multiple artists on one book. In this case it saved the score.

Cover Art - 3: Once again with the overuse of line. The characters look flat, and the scene depicted is nowhere close to being present in the story. A 3 is more than generous.