About the Superman Homepage

The Superman Homepage encourages you to link to this website. You do not need to ask permission to create a link on your website to ours. To link to us, please choose and save one of the graphics at our "Link Images" page. Thanks for your show of support!


"An Australian fights the Never-ending Battle for Truth, Justice and the American Way" 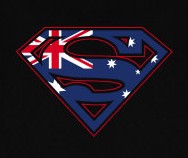 I've always been a Superman fan, having watched the Superman and SuperFriends cartoons on TV as a child. However it wasn't until mid-1995 when I found, bought and read a novel called "The Death and Life of Superman" by Roger Stern that I really began to seriously become a Superman fan/collector.

After reading the novel, an ad at the back of the book for Superman Comics attracted my attention and had me searching out my local Comic Shop to get my first taste of Superman comic books... and so began a humble little hobby that would grow into something beyond my wildest dreams.

It was also around the same time that I first accessed the growing world of the Internet, and I naturally sought out websites dedicated to Superman and related information.

Amongst others, I came across what to me was the most informative and up-to-date Superman website called the Superman Homepage. This site was maintained by an American guy called Andrew J Gould. Andrew and I quickly became friends via email, discussing the latest Superman comics, TV show episodes, etc... It wasn't till mid-1996 that Andrew told me that he was ill... in fact dying. Andrew suffered from a rare genetic skin disease, dystrophic epidermolysis bullosa, which causes the skin to blister and scar in response to minor injuries, and predisposed him to skin cancer. Sadly Andrew passed away in November 1996 but leading up to his death the two of us organised for Andrew's computer files to be transferred to me so I could continue on his work at the Superman Homepage.

Being a Graphic Designer by profession, I set about updating the website to have a more user-friendly look and feel, adding more content and a wider range of information on top of what Andrew had done, including adding information which Andrew had planned to do but had never been able to get around to.

In early 1999 the Superman Homepage had been built up to be rated as one of the premier Superman websites on the World Wide Web, averaging over 200 unique visitors a day. I was joined by up to 8 volunteers from around the world in keeping the website's content as current as possible, with regular reviews of the weekly Superman comics, Episode Guides of the TV shows, latest news and rumours, interactive Trivia Quiz, to name just a few of the areas being updated regularly. Contacts had been made with Superman-related stars and creative people, such as writers on the Superman Comics, committee members who organise the Superman Festival in Metropolis, Illinois... and the ultimate experience... contact with Christopher Reeve through a mutual friend!

In early June 1999 I was contacted by a man named Chip Meyers. Basically he and his company were setting up a major website called Fandom which would be the central place for people to come to who were interested in Science Fiction/Horror/Fantasy, and he wanted me to take control of the Superman section. There were a lot of fine details to work out, but what it came down to was that he wanted to pay me to do my hobby!

After much discussions, the deal was done. The Fandom website (of which my Superman Homepage was to be one of 12 other sections in the initial set-up) was to be launched on the 1st of November 1999. Between June and November there was a lot of work to be done, but thankfully I was able to get most of the Superman Homepage up and ready for the big launch.

Fandom was a big success, and reaction to my move had been positive. The Superman Homepage did really well with traffic building to over 1,600 unique visitors a day on average, with a growing community involved in the Superman Message Board and Chat Room. My site's reputation as one of the premier online Superman destinations has resulted in exclusive interviews with "Superman: The Movie" Director Richard Donner, Producer and Editor on the restoration of "Superman: The Movie" Michael Thau. Both myself and the Superman Homepage have received mentions in DC Comics' "Superman" comic books, with interviews conducted with the editor, writers, and artists working on the Superman comics.

Sadly, due to economic difficulties, Fandom Inc. closed its doors in mid-2001. However the Superman Homepage continued to live on, moving to a new location at www.supermanhomepage.com, returning to an independant existence as a fan-run website.

The Superman Homepage has continued to move with the times, creating an immersive fan experience, with different interactive and multimedia features, including a monthly podcast, weekly news video reports, weekly live internet radio show, as well as having a presence on Facebook, Twitter, Google Plus and other Social Media avenues. We even have our own iOS and Android app!

Over the years this website has been a resource for many Superman projects, including the movie "Superman Returns", the "Look, Up in the Sky! The Amazing Story of Superman" documentary, "The Essential Superman Encyclopedia" publication, "Secret Origin: The Story of DC Comics" documentary, and more.

I'm really looking forward to continuing this adventure in my affiliation with the world of Superman.


Profiles of Current Members of the Superman Homepage Crew

Name: Steve Younis
Email: Click here to send Steve an email
Location: NSW Australia
Occupation: Graphic Designer/Web Designer
DOB: September 16, 1971
Superman Homepage Contribution: Owner, Editor-in-Chief
Coolest thing to happen to you because of working on the site: Meeting all the wonderful people who share the same crazy passion that I do. :)
I love Superman because: He does the right thing simply because it's the right thing to do.

Name: Neal Bailey
Email: Click here to send Neal an email
Website: nealbailey.com
Location: Tacoma, Washington, USA
Occupation: Writer
DOB: December 22, 1979
Bio: Born and raised in Tacoma, WA. Five years of college, then the job, then the quitting, then the writing, then the running, and yelling, and dinosaurs. My basic life is the five prose and four poetry books I've written coupled with construction work.
Superman Homepage Contribution: I wrote reviews for the comics, I also wrote the majority of the reviews for Smallville. I work with Steve on editorial direction and new concepts for fan interaction. I was co-host for over 6 years of the Radio KAL podcast and over 3 years worth of weekly "Bailey Planet" segments for the "Speeding Bulletin" video reports.
Coolest thing to happen to you because of working on the site: Interacting with literally DOZENS of creators, being interviewed by the BBC, getting recognized in public, finding a writing style, niche, and audience, and most especially meeting all of you cool people who inspire me.
I love Superman because: He is a foolish idealist who seeks out the best in everything, like me. And hey, who wouldn't want to be able to give a heat vision colonic?

Name: Stephen Wright
Email: Click here to send Stephen an email
Website: I'm not that cool, but I do have a myspace page. Woot!!
Location: Clementon, New Jersey USA... That's south Jersey, not North. Big difference.
Occupation: Scopist (this is a person who edits Court Reporter transcriptions... you know, the people that you see typing everything that is said in a court room... well I translate those notes and spruce it up). In about a year I should be a full fledged Court Reporter.
DOB: June 20, 1974
Bio: Not much to tell. I've been a member of the site for about 2 years now. Came to the site when Superman Returns started to film and have stuck around ever since. I was a UPS driver for 3 years, until two back surgeries caused me to have to go back to school and find a new career. I'm currently enrolled at the School of Court Reporting in Mount Laurel, New Jersey. I'm engaged to be married to the love of my life in February of '08. And since it seems to be my defining characteristic I might as well tell you that I'm 6'8". Yes, I'm tall... Hence, the back problems.
Superman Homepage Contribution: Moderator of Message Board and Comments system.
Coolest thing to happen to you because of working on the site: Nothing really super cool, since I'm just a Mod, but, oohhhhhhh how I love the power! Getting to know Steve Younis a bit better and realizing that he is without a doubt one of the biggest Superman fans I have ever seen. I mean have you SEEN that collection? INSANE!!
I love Superman because: My parents split up when I was 7 years old, and just like Star Wars, the Superman movie's became my escape from my parent's divorce. Like everyone else, I love Superman because of what he stands for. How he shows that we ALL have the ability to be Super in our lives. And how great a role model he is to children everywhere. In comics today that is much harder to find then it used to be.

Name: Michael Bailey
Email: Click here to send Michael an email
Location: Fayetteville, GA USA
Occupation: Head Cashier at Home Depot
DOB: February 29, 1976 (Yes, it's Superman's birthday too)
Superman Homepage Contribution: Mild Mannered Reviewer, occasional articles
Coolest thing to happen to you because of working on the site: Jeph Loeb knows who I am. That's pretty cool.
I love Superman because: Throughout his history Superman's greatest appeal is the fact that he does what he does because it is the right thing to. All those powers and he chooses to help. I don't really know if I could be that selfless.

Name: Jeffrey Taylor
Email: Click here to send Jeffrey an email
Aliases: shaxpere, Big Red Jeff, Big Red, Red
Location: Northern California, USA
Occupation: Burden on Society
DOB: November 10, 1979
Superman Homepage Contribution: Reviewer of "Superman: The Animated Series" and Caption Contest compere.
I love Superman because: When I was eight years old, Christopher Reeve's son, Matt was on my baseball team. I got to meet him before and after his accident. I already loved the movies, but then I got into the comics and figure it's the healthiest addiction I could start. Although my wallet disagrees and thinks I should collect rocks.

Name: James Lantz
Email: Click here to send James an email
Aliases: superpupino
Location: Formerly Ohio, USA, now in Italy with my gorgeous wife
Occupation: You know that guy on the bus that swats at imaginary flying elves and cusses about the government? That's me
DOB: March 10, 1973
Superman Homepage Contribution: Reviewer of 1940s Superman radio shows, 1950s "Adventures of Superman" TV episodes, and some comic reviews here and there.
Coolest thing to happen to you because of working on the site: Two things actually. The first is getting to write about a character I enjoy because I feel it's a way of saying "Thank You" to him and all of the creative minds behind his adventures over the years. The second is getting to interview Fred Shay. We spoke for over an hour about Superman and old time radio shows. It was like talking to an old friend. Mr. Shay even mailed me a newspaper article about his Superman collection, which I keep in a scrapbook.
I love Superman because: As a boy, Superman and other comic book heroes gave me hope. Now, I try my best (even if I don't always succeed) to live up to the values they taught me.