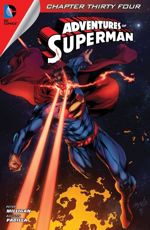 Click to enlarge
The story begins with Winslow Schott, aka Toyman, aka child abductor, promising some young children that he will show them where 'the toys are made.' The children eagerly look past Winslow's strangeness in anticipation of seeing these toys.

Superman flies in for the rescue. He warns off the Toyman, but Toyman mocks Superman. He knows that Superman has an honor code. He won't really hurt him.

BOOM! The robotic Toyman explodes into a thousand pieces. The kids look on, laughing...

Superman is not amused. He's obviously frustrated at his failure to stop Schott. After all, stalking children is not a game.

Metropolis has shut down local schools in fear of Toyman, aka Child Abductor.

Citizens wonder, "Why doesn't Superman do something about that maniac?"

At the Daily Planet, Clark and Lois discuss the matter. It is a terse conversation. Lois wonders at having to '...trust an unelected vigilante...' while Clark points out that she trusts Superman enough when she, herself is in trouble.

Lois Lane is not amused.

In Suicide Slums, the real Toyman is hard at work on his next scheme. A new toy. Always working on a new toy...

CRASH! An intruder forces his way into the toy shop, and Toyman thinks that Superman has found his hiding place. But he isn't afraid. Superman is, after all, nothing more than an overgrown teddy bear, right?

But wait... it's not Superman. The intruder is an unknown masked vigilante, and he knows the secret to stopping Winslow. A Toyman can't make toys without fingers. So, one by one the vigilante breaks Winslow's fingers.

Later, at the docks, Bruno Mannheim is also a victim of Metropolis' new... hero? The vigilante, called The Demolisher, breaks Bruno's jaw and several ribs. Those injuries put Bruno on life-support.

The Demolisher is serious about ridding Metropolis of crime. Rumor has it that Brainiac and Metallo have left Metropolis, fearing the vigilante.

Clark and Lois have a moment. They almost kiss. Does Lois know the secret?

At the Daily Planet, Perry White tells Clark to get a quote from Superman about The Demolisher. Inquiring minds want to know what Superman, that 'old-fashioned' relic, thinks of this new kind of justice.

Lois is not amused.

At the Hospital, Schott is visited by The Demolisher. He warns the demented prankster to leave town and to tell other criminals and villains to steer clear of Metropolis. This is The Demolisher's town now.

Next, The Demolisher is seen climbing through a window. The mask comes off, and it's Clark.

He's not quite himself today.

Story - 3: The Good: I like that this is a story addressing the issue of 'Boy Scout' Superman of the past as opposed to the moody 'Punisher-like' Superman we seem to be getting in the New 52. Criminals are darker in today's comics, and thus it seems that our heroes are now being made to be darker too.

However, there is more to the story than the old Superman verses the new Superman. Why is Clark/Superman developing a third personality? Why did Clark not know that he was also The Demolisher? Why, for a moment, did it seem that Clark forgot that he is also Superman? Does Lois know that Clark is also Superman? Is this Superman going to grow darker?

I'm not sure where the story is going, but I can't wait to see what they do with this plot line. I can't wait for the answers.

The Bad: I would have given the story a 4; however, the first Clark/Lois conversation put me off. I don't mind conflict between them, but I just felt like their snarky attitudes were unneeded.

Also, their conversation and relationship seemed so different when they were away from work. It was too big of a change. I wasn't sure what to make of it. Maybe I'm missing something.

I don't know how early Lois is in her journalism career, but I think Perry should be too smart to put an obviously talented reporter on something so mundane. It was a little out of character.

Art - 3: Inside art is touch and go. One panel looks great, the next you can't make out Superman's expression. The Demolisher looked great though, and the reveal at the end was drawn and colored wonderfully.

Cover Art - 4: Superman looks awesome on this cover. And though I feel the whole, "fire shooting out of his eyes" is over done in the DC 52 and Modern Eras, it's still a nice cover. Makes the viewer wonder what Superman is demolishing. I also love the flowing cape.