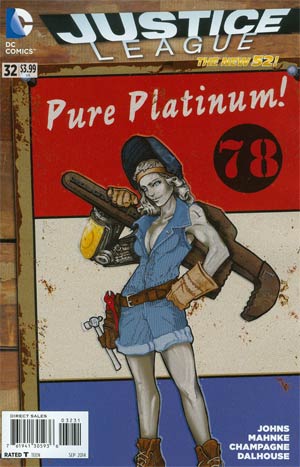 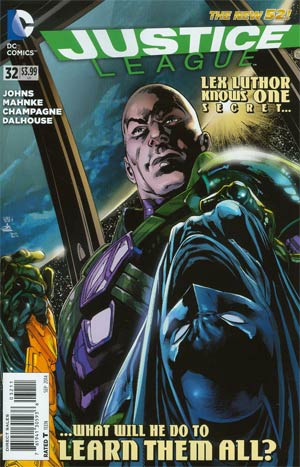 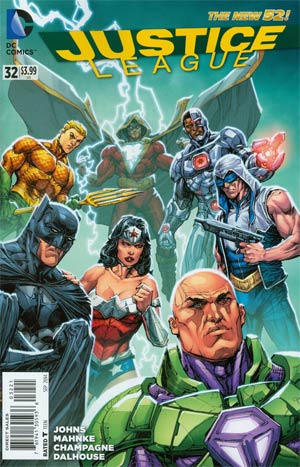 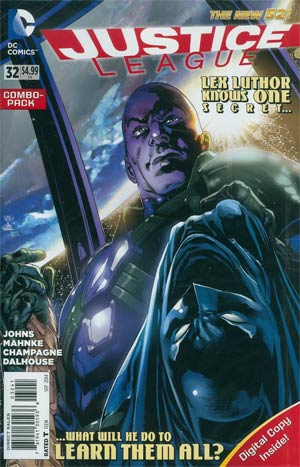 One week ago, Element Woman was saved by the Chief, leader of the Doom Patrol, after the events of Trinity War and Forever Evil and inducted into their group. Now, she fights alongside the Doom Patrol to take down Jessica Cruz aka the new Power Ring. Element Woman realizes that it's the ring doing the fighting and that Jessica is just a victim of its power and tells the Chief that they need to help save the lives of those caught in the destruction, not keep it going. Before the Doom Patrol can make a decision one way or the other, the Justice League arrives and begins saving lives. When the Doom Patrol confront the Chief about why they didn't help, he tells them that they work for him and will do as HE says.

Elsewhere at LexCorp, Lex offers Captain Cold a job at LexCorp as head of security; a better paying job with no criminal ties.

Back at the fight, the League engage Power Ring as Shazam distracts her so Cyborg can make a connection with her ring. In so doing this, he learns that the entity that is the ring, and therefore controlling it, is Volthoom, the first ring-bearer. He tells Cyborg that the reason he wants to use people like the Earth 3 Hal Jordan and Jessica Cruz is because they're fearful and he can control them on his path of destruction that will bring the one who destroyed his world to ours, where he can have Superwoman's child. Once Volthoom ends the connection, Cyborg and Jessica pass out. The Chief orders the Doom Patrol to keep Jessica away so he can examine her and take her ring, but then with a sudden turn of events, Lex shows up and tells him to back away, or die.

Story - 4: Much better than last issue, that's for sure!

Don't get me wrong, I LOVE Geoff Johns writing and he's kept me entertained and engaged for 32 issues now, but story arcs like "Origin", "A Villain's Journey", "Throne of Atlantis", and even "The Grid" and "Trinity War" were Justice League stories where I was excited to see Superman, Batman, Wonder Woman, Green Lantern, The Flash, Aquaman, Cyborg, Green Arrow, and others go up against villains like Darkseid, Graves, Ocean Master and the Atlantean army, and Despero. I mean that's what a Justice League book is supposed to do! Look at Grant Morrison's JLA run from the 1990s! I think the first four arcs or so of this book did a fantastic job at that, and Throne of Atlantis is now one of my favorite Justice League (as well as Aquaman) stories, but with the Forever Evil tie-ins and now the over-use of the Doom Patrol in a book labeled Justice League, I think it's getting to be a bit much.

Again, I have no problem with the story, I'm still entertained! I loved reading the Crime Syndicate's origin stories, and about the Metal Men, and now about the Doom Patrol (although I absolutely despise the Chief...), but the reason I buy a book entitled "JUSTICE LEAGUE" is because I want to read about Superman, Batman, Wonder Woman, and other heroes banding together to face evil. Issue #30 and even parts of #31 felt like Justice League again and I loved it, but this issue felt too much like Doom Patrol to me.

So why am I still giving it a 4/5? Honestly it's because I still really enjoy the story. I like the idea of a Green Lantern-like character existing on Earth where all the Green Lanterns (minus Simon Baz... Where are you Simon?) are off planet and where the Justice League has to be the ones to deal with it instead of a GL. Plus, I loved the use of Volthoom, especially being the fan of Geoff Johns' Green Lantern run that I am.

I am also a fan of Captain Cold, and I like seeing him being given a new shot at life. It's refreshing to me and although I know it won't last (once a Rouge, always a Rouge) I'm going to enjoy it while I can!

Cyborg and Shazam were also used really well in this issue, I hope that partnership continues in the future. Also, this is going to be one of the last times in a while where we'll see Superman and The Flash as members of the Justice League (as Lex Luthor and Captain Cold will be taking their places), so I'm also savoring these last moments with them on the team. Hal Jordan please come back soon!

Art - 4: Stellar art as always, I'm never really disappointed by Mahnke, although I do hate how he draws Batman's head with his white eye-slits blacked out. I hate how in live action Batman movies that he doesn't have the white eyes (Batman v Superman please come soon!) and whenever you see him in the dark he's just this black head with horns and sometimes a mouth. It bothers me. I love Mahnke's Lex Luthor though!

Cover Art - 4: I desperately wanted to give this cover art a 5 because it's so good! The only reason I did not was because quite honestly, it had nothing to do with the issue. Had this been the cover to last issue and last issue been the cover to this, both would have gotten 5's.