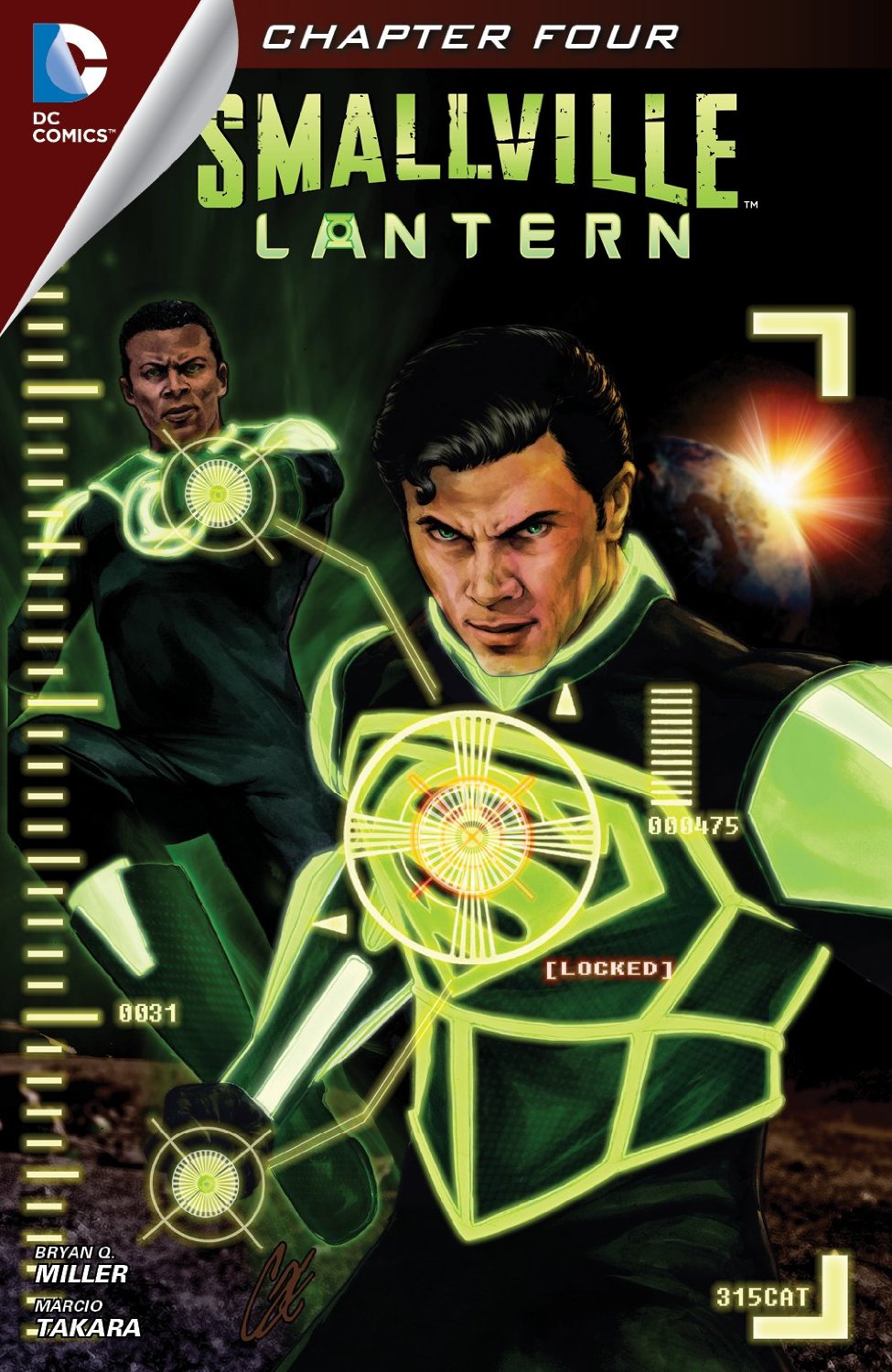 Click to enlarge
Lex and Otis discuss the recent events in Russia [from the "Alien" story arc]. Lex is pondering why the Lex Luthors of other universes haven't responded to his inter-dimensional calls. When Otis suggests finding a "bigger battery," Lex decides to try getting his hands on a super-collider recently made available by rival businessmen Ted Kord and Bruce Wayne. He also reviews footage of Superman's latest exploits in green, and says he recognizes the symbol on Supes' new ring but isn't sure where he's seen it before.

In the Arctic, Superman is trying to learn the ways of ring slinging in the Fortress of Solitude. John Stewart fills him in on how the process works, but he's a bit vague and uncertain about the why. Superman, not satisfied with answers that are basically, "It's just the way it is," decides to enlist the help of a scientific expert to study the ring.

In Metropolis, Oliver and Chloe are getting help from digital Tess to dig deeper into the recent armed robbery Superman foiled. They discover the whole thing was, in fact, a distraction from a real robbery from the D.E.O.

Later, at S.T.A.R. Labs, Professor Emil Hamilton and his crew determine that the Green Lantern rings - which Stewart has been associated with for ten years - operate by utilizing sub-space. Unfortunately, before they can learn more, the facility is besieged by a squadron of Manhunters.

Story - 4: So John Stewart's had the ring ten years? And in all that time, he's never turned up once on anyone's radar? He obviously spends quite a bit of time on earth, otherwise he'd never be able to hold down a job as a detective. Are we to assume that he takes the occasional leave of absence to tackle intergalactic threats like a Paralax-Possessed-Hal? And those leave of absences manage to occur at the same time earth is faced with something like a Zod-Possessed-Lex, Rabid-Zombie-Plagues, and a fire-spouting planet colliding with earth?

But hey, enough is enough. I'm letting it be. I stand by my position on this, but I'm just going to move forward and ignore that little hiccup in the story. (It's actually a big hiccup, but let's be nice.)

Because the fact is, if we just take this as a standalone story not linked with past continuity, it's a darn good one. (Possibly one of the best.) I like Stewart as a detective working the streets, keeping his Green Lantern ring and the power it gives him under wraps. I like his meeting with Superman, and the training that follows.

I especially like the scene where Superman asks why the Corps bothers with imagination to create wrecking balls and other constructs in the heat of battle, when a simple energy blast should suffice. I've often wondered that myself.

I raised my eyebrow a little at Stewart's apparent acceptance of the rings and their use at face value. He's never struck me as the type not to question authority, at least not in other versions I've read. But this is a version of the character unique to Smallville's universe, so that can be accepted to a point. It doesn't negate other versions out there, after all, and I suspect he'll start to question authority and the Oans a bit more later in this story thanks to Superman's influence.

Meanwhile, I'm not so sure how I feel about Prometheus in this story. Where does he figure into this? And frankly, why should we care? I think I just have a sour taste in my mouth for this character thanks to Cry For Justice a while back, so I'll attribute my negative feelings to that. (The fact he looks like a Judge Dredd wannabe doesn't help.) But hopefully, we'll see something interesting here.

The arrival of the Manhunters suggests the action is about to kick up several notches. So I'm looking forward to next week.

Art - 3: Ugh. I just don't care for this style. It's just not for me. It's bland and without detail. And it doesn't help that the characters look nothing like their television counterparts.

I'll leave it at that. I feel guilty every time I write about this story's art because I know my feelings are completely subjective.

Cover Art - 5: Jokes about Superman's resemblance to Tron aside, this is another good cover. If not for the target, it would seem like the first cover from a different angle. However, the fact that it's a P.O.V. from one of the invading Manhunters gives it some gravitas and makes it an effective illustration of what's inside. I've always been a fan of covers that suggest what the story will be, rather than just an iconic image. Although, when you can manage both (and, in my opinion, both covers have), you've accomplished something special.