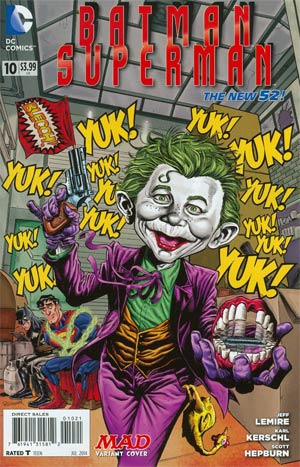 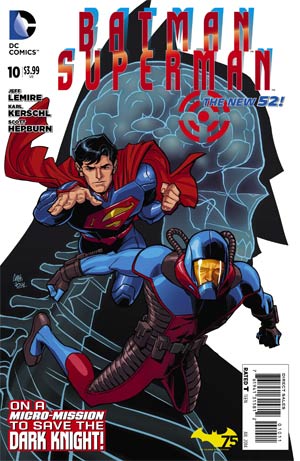 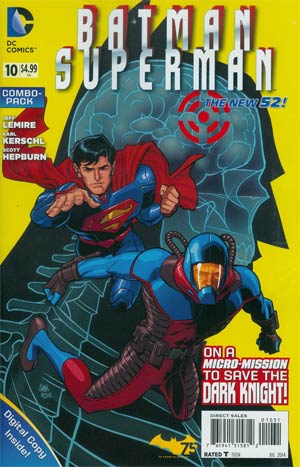 Batman is dying... and time is running out!

This looks like a job for Superman... and The Atom!

In order to save Batman from a micro-sized shrunken city that has somehow entered his brain, Superman must turn to an organization called S.H.A.D.E. S.H.A.D.E sends Ray Palmer in for the rescue. Ray is able to shrink himself and Superman to microscopic levels. Together they enter the BRAIN OF THE BATMAN!

As they enter the micro-sized world, they find a city under siege. It's inhabitants are being enslaved by the likes of the "Super Titan Gladiator" and his sidekick "Dr. Smashhammer."

As Superman and Ray Palmer fight the villains, Gladiator gains access to Superman's 'shrinking' belt and thus grows to normal size and finds himself in the Fortress of Solitude with an awakening Batman. Batman commences to kick the butt of the strange creature that has somehow successfully infiltrated the Fortress of Solitude. All the while, Batman complains about having a mountain-sized headache.

The micro-city is saved, Batman is saved, the villains are back in prison where they belong. All Batman wants is some aspirin and to go home to Gotham.

Story - 4: The Good: If I had to describe this story in one word, that word would be, 'fun'. Lemire has written an enjoyable, light-hearted story. The premise is a bit wacky, but the execution is awesome. I let some of the absurdity pass because it is so much fun. Ray Palmer is very likable, and the dialogue between him and Superman is amusing.

This is a Batman/Superman comic, but this issue is mostly used as a vehicle to introduce Ray Palmer, aka The Atom, to the new DC 52 universe. That's not a bad thing. Like I said, I like Palmer. But it is worth noting this fact. After all, who better to introduce a new superhero to the New 52 world than Superman and Batman? You gotta kiss the rings ya know...

Humor. I always love stories that have humor. Ray Palmer is respectful of Superman and Batman, but he is comfortable enough in himself that he often teases and pulls a few pranks them both.

There is a surprise ending. While most of this issue is good, light-hearted fun, the ending is a bit of a shocker. I won't give it away. But I have a feeling that the ending is going to carry forward through quite a few issues and storylines.

The Bad: You would think that a trip inside Batman's brain would be a good time to psychoanalyze Mr. Bruce Wayne, but alas, Batman/Superman #10 does not tell the obvious story. Lemire, instead, takes Superman and Palmer on a throw-away adventure. We meet some new friends and new villains; however, both are so absurd that one gets the feeling that they will never be heard from again. They were only made for this one-shot story.

Batman doing battle with the 'Super Titan Gladiator' is a bit unbelievable. Gladiator just hurt Superman for crying out loud. I know Batman is supposed to be cooler than some brawling alien, but come on! Ninja skills against an invulnerable being is not going to work.

Art - 5: I liked the art. Hepburn and Kerschi both share credits for the inside art. In my opinion, I can't tell who drew what. The colors are rich and the expressions are straight on. I also loved the way the villains were drawn. They looked massive and dangerous. I loved Dr. Smashhammer's giant hammer. I actually hope we get to see them again. I love the look on Batman's face as the two miro-superheroes exit his nose. I also loved the look on Superman's face when Palmer jokes that Superman may have to stay inside the Bat-brain for a while. Superman's look of horror was just fantastic.

Cover Art - 4: It's not one of my favorites, but it's a nice cover. It conveys what is happening inside the comic well enough. And Superman looks good. That's always a plus with me.