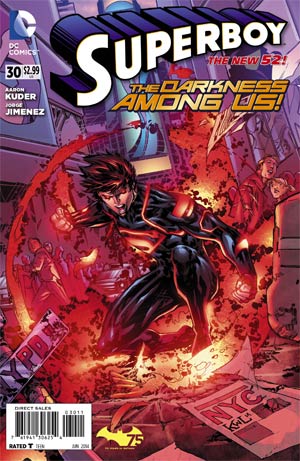 Click to enlarge
Jon thinks back to the day he killed Aquaman. A time before he met Kon-El over a decade into the future. As his dreams grow, Kon appears along with a myriad of other Superboy copies from across space and time. They deliver some home truths and attack Jon sending him hurling into the time stream and knocking him into the present New York City where he landed after the trial of Kid Flash.

After his recent dark thoughts and machinations the present day doesn't seem anything like the life he experienced. No oppression, and no Harvest manipulating his every thought and action.

Harvest is the only one who knows how to stabilize his corrupt DNA so Superboy picks himself up from the street and soars skyward. His condition, worsened by his dreamlike encounter with his other selves and the trip to the future, pushes Jon to his limit and he crashes onto a nearby rooftop. In his weakened state he is greeted by the Guardian and Superboy attempts to attack him. Guardian knocks back the attack and Jon is shocked that his ability to siphon metahuman energy isn't working. As he loses consciousness he realizes too late that Guardian is a human superhero. Guardian assesses that Superboy is struggling with a psychosis problem in addition to his physical damage and requests backup.

Jon dreams and remembers his childhood, back when Harvest was still a human man. He thinks back to a day during his earliest of training when they had to flee from their hideout to escape metahumans. The memory however, like before, is corrupted and the other Superboy's appear with Superman taking Harvest's place calling him 'SON'.

Horrified at the realizations of his true parentage Jon wakes screaming and find himself in a medical facility - STAR Labs Advanced Ideas Division. Jon is greeted by a team of scientists that have nursed him back to health: Michael - The Guardian, Niti, Peter, Aya and Dr. Harold Alexander Grey.

Jon is taken aback by their genuine offer to help and their seemingly innocent motives. After all Kon had to deal with in N.O.W.H.E.R.E and with Jocelyn Lure along with his own past memories it is understandable that he is cautious. Dr. Grey is more than open about running tests on Jon and reveals he knows Superboy is half alien, half human and even from the future from his strange tachyon levels. Grey even tells him he knows from their own research on Kon that he is an impostor yet he makes no dark notions to use the information - something that makes Jon feel more at ease.

Grey studies Jon's genetic makeup and psychological readings and asks if Jon is suffering from any bad dreams. A possible side effect from a faulty trip through time, he surmises that Superboy is suffering a serotonin fluctuation. He reveals that Superboy has such bad cellular deterioration that his alien DNA can't store power for long periods (like Superman can charge up and store energy like a portable battery.)

A cautious Superboy questions Dr. Grey as to why he is offering to help, to which Grey nonchalantly replies that it is what A.I.D does and Superboy was obviously in need of help. Grey asks a question in return and one that makes Jon feel human... he asks his name. Superboy whispers 'Jon' and then notices Michael and is still ill at ease when Guardian arrives with Niti to escort him to his new room.

For a second or two the Biosuit in the center of the room seems to house Kon's ghost. As Michael and Niti leave for the night, for the first time in years Jon prepares to have a relaxing sleep. He doesn't see however that Kon's ghost is indeed with him in the room and he is very unhappy.

Story - 5: Aaron Kuder has certainly made an explosive start using the awful Teen Titans run as a catalyst to begin a new arc or soft reboot for Jon Kent and his new life in the present.

The parallels with Superior Spider-man are still here - a ghost haunting his mind, a gradual departure from his evil mission to replace Superboy to change history however it is very cleverly done utilizing several facets of Superboy's already muddled New 52 history.

The book reaps immediate benefits with the soft reboot, first and foremost through the introduction of the A.I.D team who are instantly likable.

After being used by Harvest, N.O.W.H.E.R.E, Gen13, Jocelyn Lure, H'El, Psycho Pirate, Dr. Psycho, Lex Luthor, Raven, Kid Flash and Echo its nice to have an actual 'nice' team around to help Jon become whole. I sincerely hope this new direction sticks and is given an opportunity to grow beyond the mess that the title had been swamped in.

Marv Wolfman held the starting pistol for the new direction and Kuder is certainly delivering a new take. I hope the 'evil' Jon Kent warms more from this point on. The characterizations in this issue alone are far stronger and more poignant without the overuse of internal monologue boxes.

All in all an excellent issue that actually felt too short.

Art - 4: Aside from the odd panel that was a little bit too cartoony, the interior art was fantastic!

I realize the cartoon effect was deliberately done in the flashbacks to accentuate the bizarre dream state but it didn't marry well with the often beautiful penmanship shown.

As with the writing, I hope the artwork is given the chance to breathe and build to a new look for this series.

Cover Art - 3: Just too similar to the other New 52 Superboy covers. Because of the strengths shown in the writing and the art, it seems a shame to have a cover that just feels very generic.

Having a new Guardian seems like an opportunity to showcase his arrival but instead we just have Jon Kent's teeth grinding, which in this title, sadly, is becoming his 'thing' - besides always looking moody.