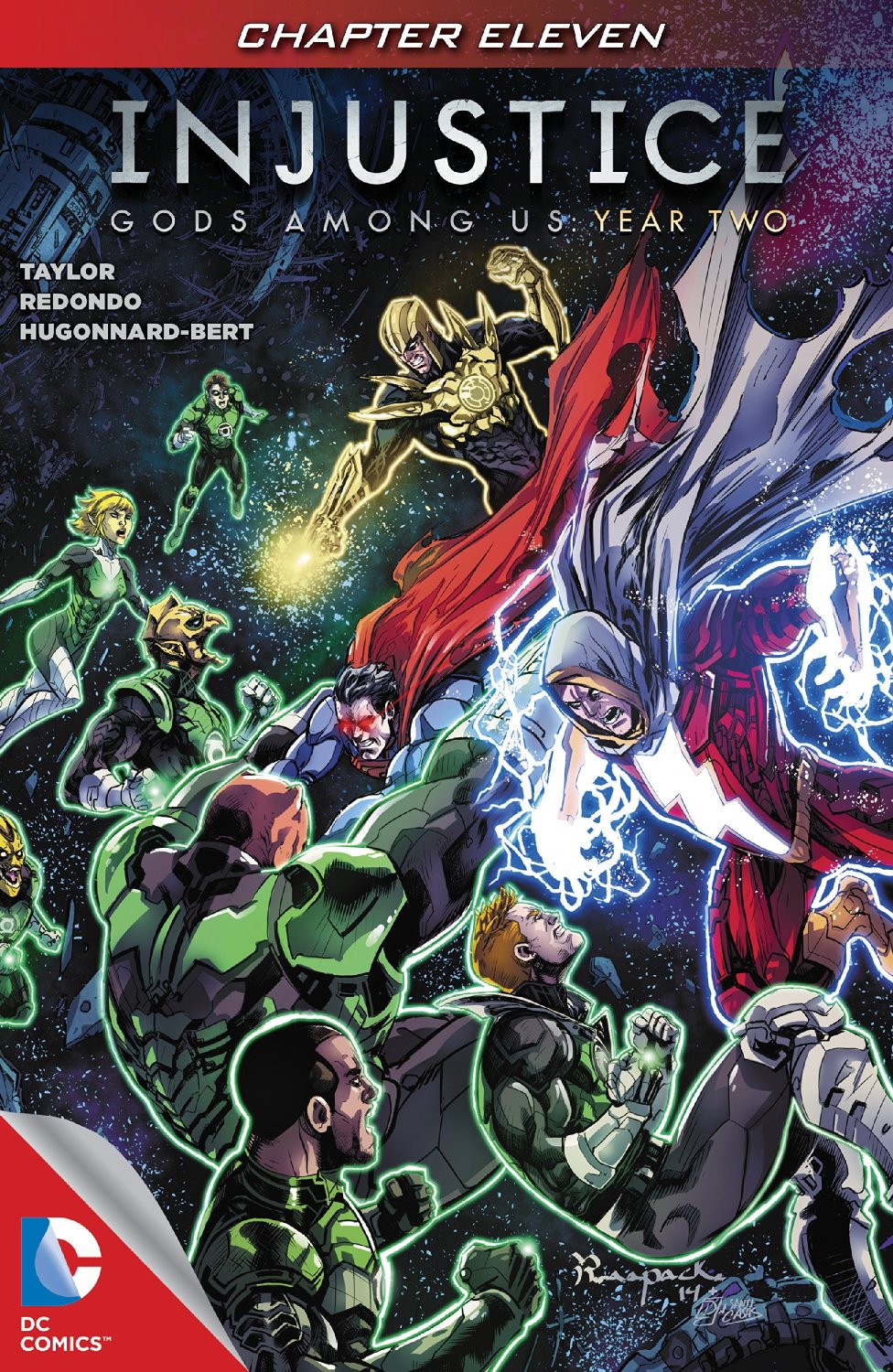 Click to enlarge
Green Lanterns Hal Jordan and John Stewart race to Earth in an effort to cease the hostilities between the Green Lantern Corp, The Guardians of the Universe, and Superman's regime. On their way, they see a power ring returning to Oa, and learn that CH'P is dead. On Earth, the melee between the GLC and the Justice League is in full swing. Hal attempts to have Killowog stand down from fighting, but there is no need, as Sinestro has summoned the Yellow Lantern Corp. Killowog yields on behalf of the GLC, asking only to take their wounded and dead, then return to Oa. Sinestro differs with this proposition, believing that allowing the GLC to leave will only guarantee their return and in full force. Superman agrees with Sinestro, who then pronounces that the GLC must be exterminated. In Gotham City, Harvey Bullock is hospitalized after a run-in with one of Superman's super-pill enhanced police force. Bullock is angered that the police force can act with impunity, and Commissioner Gordon decides that it's time for the GCPD to police Gotham.

Story - 2: It's no mean feat on the part of any writer to keep continuity in order. It's especially difficult when the writing must bring characters from the past into present or future events, particularly when the past events need to line-up with and justify the future's status quo. Deviations from the main task can be enriching, or a complete waste of time a la Harvey Bullock. This issue of Injustice doesn't deliver in the action department, neither is its entertainment value enough to overlook a severely lacking story, in which things are occurring because they must, rather than any semblance of an organic, logical progression. Sinestro's actions make sense inasmuch as he's a playable character for the game. Hal Jordan siding with Superman makes no sense, aside from the fact that he's a part of Regime Superman's team. Superman's actions make no sense, even in the scheme of the game, as the Yellow Lanterns pose the same threat as the GLC. The aside with Gotham City and its law enforcement actions comes from out of nowhere, and only stifles the already calcified belief that any of these actions could be occurring in any universe, unless absent a frontal lobe by all participants.

It's beyond obvious what Sinestro's involvement in this conflict actually is: a chance at revenge that has been nursed by an unhinged megalomaniacal mind. Sinestro only wants to hurt, punish, destroy, any of the aforesaid, with the GLC bearing the brunt of his arrogant justice. This should be obvious from Sinestro's killing of Kyle Rayner, but as no one saw that kill, Ch'p's murder should be more than enough to suffice. Ch'p was murdered. There was no need to kill him, as engaging Ch'p would have put his focus elsewhere than Regime Superman, but Sinestro does it anyway (which should be impossible since Ch'p was shielded). The response from those around? Nothing. Unless all of the players: the League, GLC, and Yellow Lanterns were all of a mind to kill each other, Ch'p's death should have ceased the fighting, but that's so pre New 52. No one is thinking and hence, no one cares.

Something has to really be wrong with Superman to even consider what Sinestro is offering, but something must be even more wrong with Hal Jordan, who is a member of the GLC, who knows what absolute power does to a person and onto the people of that person, yet he cannot see that Regime Superman is no different than Sinestro: a man with an agenda, who is willing to do anything to see it carried out. How it is that no one outside of the Bat-family can see this is beyond moronic, and it's really hindering the storytelling in addition. For a reader to believe what is happening, he would have to accept that everyone in this world has an IQ of soup. Stormtroopers in black, wearing masks that make them unidentifiable are given carte blanche to become mini-dictators, and no one has anything to say about it? At all? It's unintelligent and unimaginable; not with everything that has transpired before. The fight with the GLC, after so many issues of build-up has fizzled into a surrender, just to set-up a scene of questionable morality, again, and more shock and awe at how low these heroes have fallen... if they were ever heroes to begin with.

Injustice can, sometimes, be more than the sum of its parts. However, this issue was a rote, paint-by-numbers, pandering fanboy junkfood fest. Nothing of worth was accomplished, other than to have readers come back for the next issue, and what for? So we can read more implausible scenes of outfitted stock characters? The villain, complete with twisty mustache, the ne'er-do-well, and the fodder that is usually the chorus? This issue could have at least had a good fight scene but it didn't deem well enough to do that.