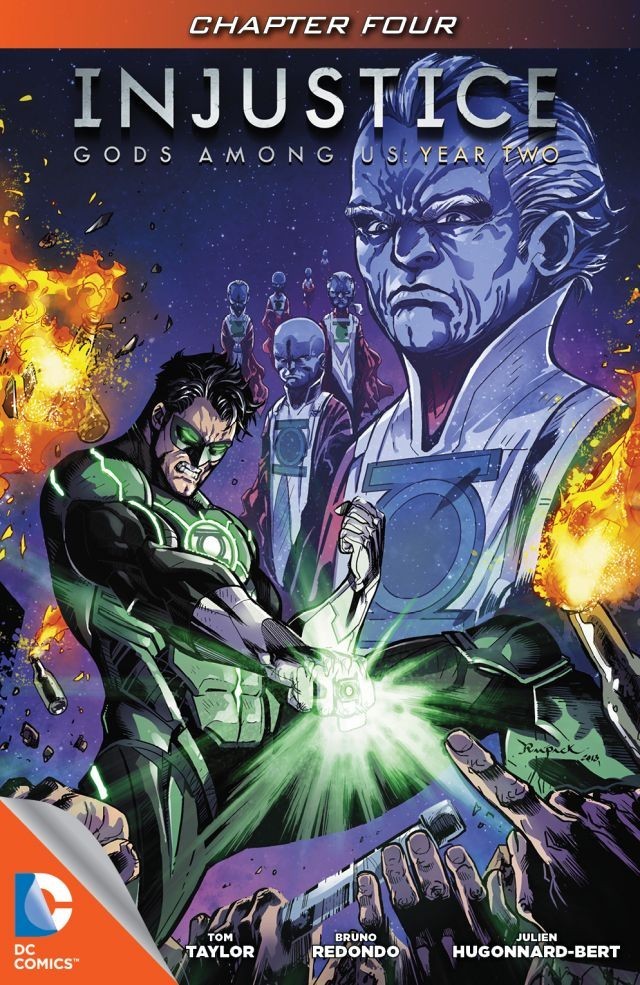 Click to enlarge
The President of the United States places a call to the Batman, but as he's incapacitated, Oracle receives the call. She assures POTUS that she's working with Batman, and that they want the world set to right. Oracle believes that they have an equalizer in the form of the super-pill data that Batman was able to transmit. Superman receives a visit from Hippolyta who retrieves Wonder Woman for Paradise Island, and the healing that only Themyscira can offer. Sinestro arrives soon after and a quick battle with Superman commences. A bleeding Sinestro informs Superman that he's only there to warn Superman, that the Guardians of the Universe are coming for him. Green Lantern and the Flash have successfully coerced the US Congress to forgo their abeyance and complete the people's business. They leave and walk into a blockade of police, accompanied by Guy Guardner and Ganthet. Ganthet requests that Green Lantern take him to Superman.

Story - 2: Perhaps, and only perhaps, Injustice: Gods Among Us would fare better if the cut-scenes from the actual game didn't exist. The story would then unfolds without being tethered to an ending that must happen. Perhaps, and only perhaps, if the story were let go after the final confrontation between Batman and Superman, and allowed some maturation time, a year two might have been seen for what it is shaping up to be. However, Injustice is a top seller and this is for money if there ever was a comic meant for the quid. The existential problems that are forming are not insurmountable as they are irrepressible, and that's thanks to an ending that has to happen. We know that Batman fails at restoring the world to normalcy, and has to call in Superman to take out Regime Superman, so when POTUS is making that call, you'd have to think that he's out of his mind. Fanboys can debate whether or not Batman can beat Superman, but the President? Does he honestly think the Batman can assist him after all those megatons failed to do so?

Oracle is right behind him with the dubious notion that spirit duplicating the super-pill is the way to go. If the annual proved anything, it's that the super-pill is a bad, bad idea, that easily falls into the wrong hands (dun, dun, dun!). It's comestible Deux et Machina, and it won't do a bloody thing, as we know that the only thing that can stop Regime Superman, is Superman. Sinestro coming on board is simply ludicrous, as there is no way possible that he can be trusted, and it removes all doubt that Superman has lost his bearing irrevocably. It's one thing to canoodle with Lobo, but Sinestro? It would have been interesting to see Sinestro make Kryptonite, though, which would have to be gold and remove Superman's power permanently.

The situation with Congress is the most intriguing, but mainly for the remark that the congresswoman makes, asking if GL and Flash believe they can do what they've done, and just walk out. The answer, obviously, is yes. One, Congress knuckles under to them with little more than brow-beating; they're quite apparently not beings of great intestinal fortitude or integrity. Two, Flash and GL just walk out. No, congressman makes a statement, scene, or even sticks out their tongue. It's that easy. You have to wonder what Congress was deadlocked about to begin with. Ganthet coming to Hal Jordan to see Superman, is strange, as Sinestro went right to him. It makes for more drama, but it's unnecessary to say the least. If the Guardians have a problem with Superman, they could literally beam him to OA and have tea and talk with no protest. All of this build up and the result will be a foregone conclusion: Regime Superman will reign until Superman takes him down.

It's understandable that Taylor would want to show the consolidation of Superman's power, but we need something that breaks away from the path that must happen. A time-travel story, where they try to prevent Lois from dying or succeed at killing him would be cool.

Art - 3: Alas, Derenick, I knew his art well. All pining aside, the art has been serviceable, but so is a warm bowl of mush. A few currants in the mix would be nice.