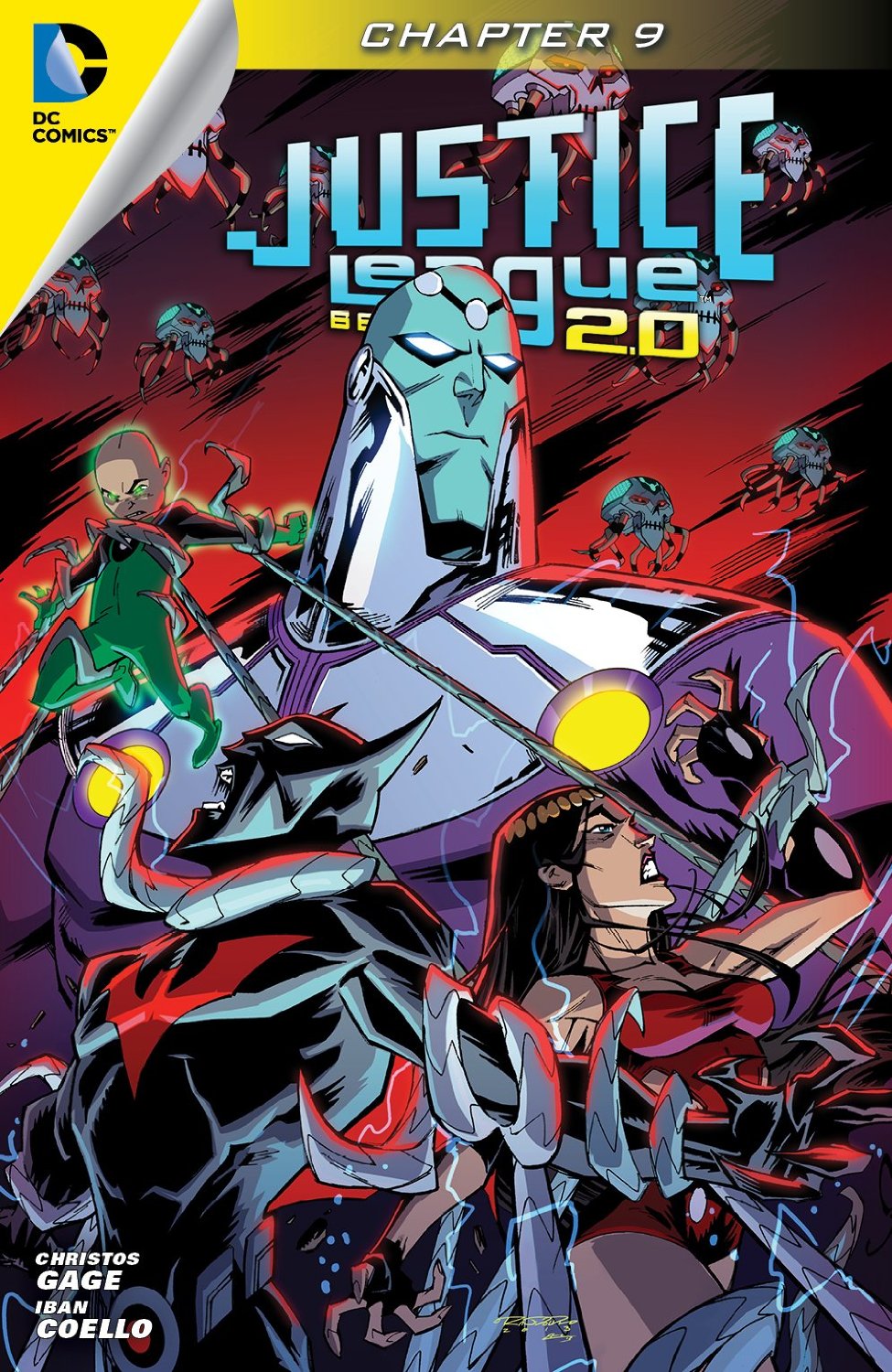 Click to enlarge
Jax-Ur's son, ominously named, Zod, is treated to some time away from the Watchtower. Billy Batson initiates a snowball fight, but Zod, not having been allowed to be a child, doesn't relate to recreation without purpose. Zod sees a father playing with his children, and request to return to the Watchtower. Superman is at the Watchtower, receiving an earful from Bruce Wayne, who believes that Zod is a fruit from the tree of Jx-Ur, who is a psychotic criminal. Superman debates with Wayne, but on Terry's arrival, Bruce ends his communication. Zod is given a tour of the trophy room, but soon after, a Manhunter comes to life in the trophy room, followed by an Amazo. Mister Miracle manages an escape with a Boom Tube, and later discovers that the technology on the Watchtower has come alive.

Batman and Miracle agree on a total system shutdown, but the logistics of the plan pose a threat to the Earth. It's surmised that the energy can be sent to the dimension of the Speed Force, but the ramifications for the Flash are unknown. The Flash is successful, but immediately the JLB is presented another, exponentially worse situation, as the technology of Earth proceeds to outdo what happened on the Watchtower.

Story - 5: The introduction being over, we get the ensemble story that JLB 2.0 has shown potential of being. Superman not being the focus doesn't slow down the action or the movement of the plot, and the characters are continuously developed or reinforced of what we've seen. The opening sequence establishes more in its 7 panels than the average digital book, or regular comic for that matter. We're reminded that Terry isn't Bruce, as he takes the time to be with Zod, showing no fear or apprehension of him, yet, we've seen some trappings of Wayne in that Terry is around Zod, Billy, Kai-Ro, Danica et al. He even notes the need for Zod to return, making the connection as along with Billy. Billy, and it's good to see him again, is a kid. He likes snowball fights, fun, and has a crush on the cutest girl close to him. Kai-Ro is the child who never was: wiser than his years, more adult that his frame will allow. It all meshes very well to show how distant Zod is from being a child, without being decompressed into an abyss.

Superman bickering with Bruce is becoming commonplace in the DC Universe, but here it works as we see how distant Bruce is from children himself. The same man who was made an orphan seemingly has no compassion for an abused child because of his name. It seems very cold, except for the meme being that Batman is all ways right. Superman comes across as thinking with his heart and not his head, still naive after all this time, except for the meme of Superman inspiring others. It will be interesting to see which meme overtakes the other by story's end. Batman's exit as Terry enters is very humorous, in that he still suffers from the stilted growth in his interactions with those he cares about. The issue is a four on basis of the characterization alone, but then the reader is treated to action.

The technology coming alive occurred just when I was about to ask: "Is this strictly going to be a development issue?" No, not at all. The tech springs to life and the story kicks up into high gear. Mister Miracle, who is probable the most functional supporting character of the book, which the least amount of light, reminds reader, and writers, of how it should be done. He thinks, he solves. Barda bashes and wrecks, but Miracle looks for a solution to the situation, whatever it may be, not the eradication of it. The set-up for the Flash is well done, giving her some light and a moment of gravitas, while pushing a wee further into the relationship she has with the Speed Force. The JLB stops the tech takeover, but their problems are just beginning. This issue was so much fun to read and review, it's much to my chagrin that it's been dilatory thanks to the holidays, and my apologies a thousand times. That being said, if you like superheroes, action, characters, both familiar and written well, this is your book.

Art - 5: Check page 5, panel 2. See the look on Zod's face? Billy's? While Terry and Kai-Ro are in their own set? That's how you storytell, when you have limited space and time. Take heed digital first comics.