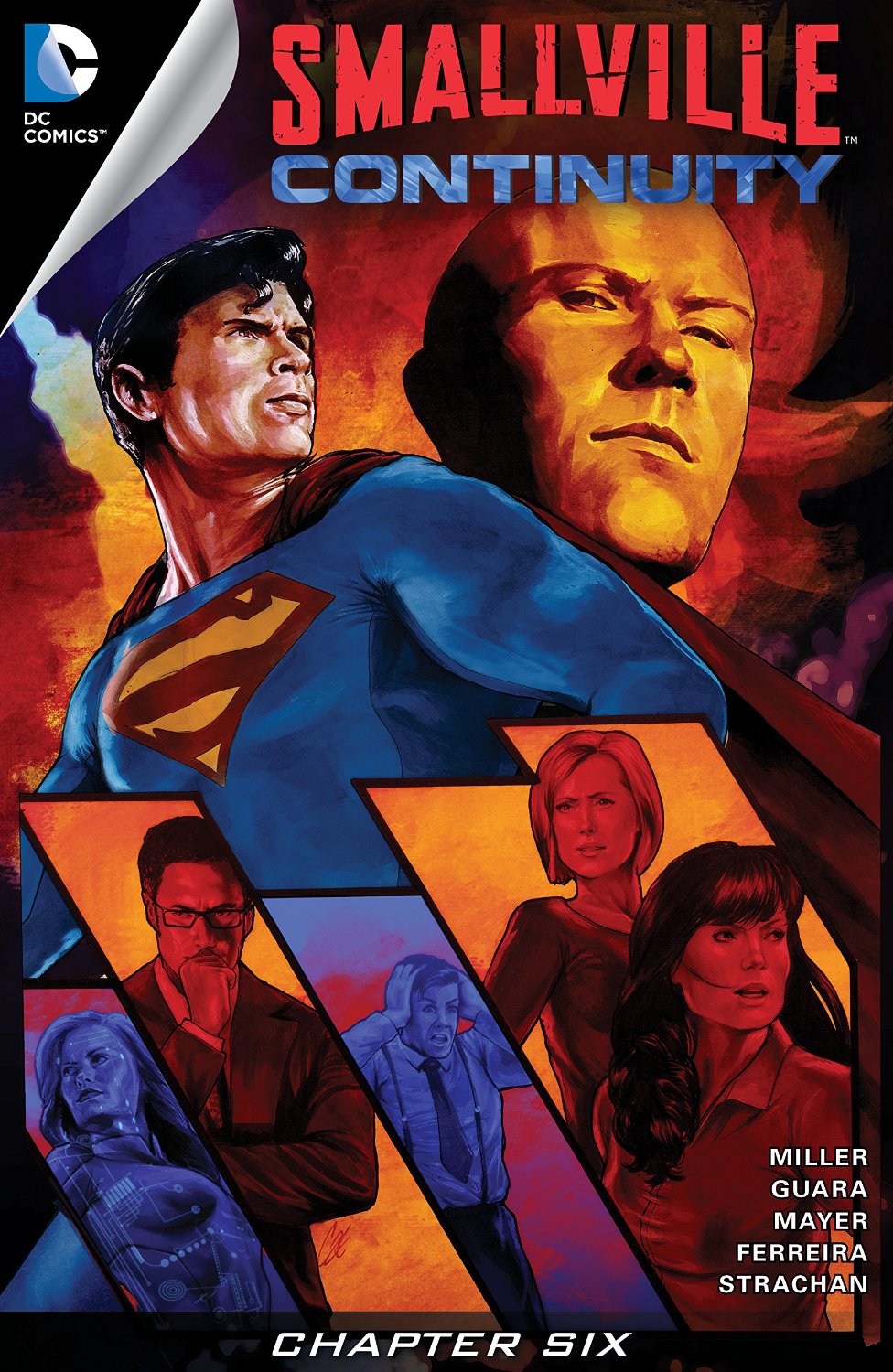 Click to enlarge
As Lois falls to her death, who should rescue her? Superman? No, with the aid of Pegasus, Wonder Woman grabs her and leads her to safety.

If they succeed Clark, Watchtower, Tess... everything will be lost.

Superboy has gathered all of the youngest of heroes to form a team of Titans and they prepare to stop the tide. Superman orders him to stand down but another team arrive to help - the leaders of the Legion. Lightning Lad, Saturn Girl, Brainiac 5, Chameleon Boy and Dawnstar. With the Legions arrival as back up the Titans with Superman's blessing rush to stop the reboot in Smallville. Superman races over and picks up Lois from Pegasus to take her to Watchtower. Wonder Woman now free of her passenger vows to fight with no inhibitions.

Pods land in Metropolis releasing Monitors as all the older heroes form an army to fight them, Superman arrives with Lois and asks Tess if their backup plan worked.

Tess confirms that a second virus was planted in Lex Luthor's battlesuit. Lex hears a recording of Tess and is shocked as his armor falls apart. Lex Luthor is nothing if not resourceful and hunting around the dead Monitors on the ship he activates a self destruct on one of them. As the hull rips open Superman is there to aid his escape and Lex is relieved that at least they are honorable.

Aya asks John Stewart if this battle echoes the Parallax Wars as they battle powerful Monitor soldiers. John tells Aya this is far, far worse but the distraction is enough that Saint Walker is captured and killed, despite a delayed bombardment of emerald energy on the Monitor army. The two Green Lanterns are heartbroken as the blue ring leaves orbit for a new owner.

The Monitors meanwhile realize their computer network has been compromised and that the Monitors on Earth are dying. The leader orders that the forces of Manhunters and Monitors pull out to be replaced instead by Deconstructor ships. The female Monitor vows that this Earth will no longer be part of the reboot and live in the brave new world, while the heroes think they have won the day.

Instead of a fresh start the Omega Monitor will be launched on them to usher in oblivion...

Story - 5: The action is at the forefront and deservedly so. The magnitude of the story is truly being felt especially with the loss of Saint Walker. There are some moments when Tess confronts Lex and deconstructs his suit that are genuinely fun and will obviously lead to further developments later. Also Diana rescuing Lois instead of Clark was a neat twist that lead to a nice scene where a hardened Diana mourned the loss of her people. Of course the Legions late arrival was also a welcome boost along with the formation of the Teen Titans. As the arc escalates Smallville proves just how well a Superman story can be told that has several levels - in a way it makes you mourn the TV series but it also has opened the door to amazing new possibilities.

Art - 3: The sheer volume of characters squeezed into the issue means that its become so difficult to keep track of who is who. The art is bursting with energy but is sacrificing many details to keep up the pace. I hope that we get some character markers, as this would help readers new to the Smallville universe.