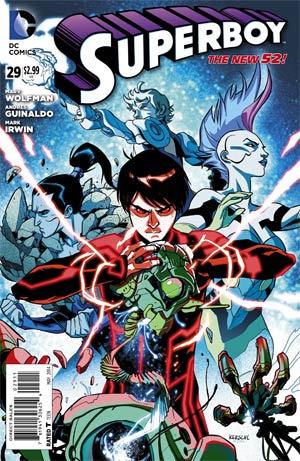 Click to enlarge
Superboy, Schiz, Lodestone & Volt are setting plans in motion by destroying several weapons facilities. At the same time Red Robin, Raven and Wonder Girl stand in the wreckage of another facility site which Superboy and his evil legion had destroyed under the guise of terrorists. Red Robin, mourns his team after the loss of both Kid Flash and Solstice for war crimes he is longing to return to normalcy.

Raven telepathically summons Superboy and his legion while the others help clear debris and help survivors. Seeing the damage caused Wonder Girl urges the team to stay and help and reaches out to a reluctant team leader. Before Red Robin can answer Superboy arrives. Jon has already fed Schiz a pack of lies to recite to everyone to cover their actions. He suggests his new found legion help secure the future so they can return to their place in time. Schiz introduces herself as Imra (Saturn Girl) and the others as Garth (Lightning Lad) and Rokk (Cosmic Boy). The Titans agree to leave while Superboy stays behind to secure the defenses.

With the Titans gone Superboy proceeds with his schemes of manipulation. He hands out terrorist uniforms so they won't be recognized and assures them their actions will eventually have them hailed as heroes. At that same time Harvest tries to pull his son back to the present but Superboy resists to complete his plan. Sneaking in, he disguises himself as an Echo guard while the others attack from a different direction. Superboy shoots Volt in the back and of course they believe it to be the enemy not suspecting it to be Jon. They are unable to rescue the other metas from their pods and Superboy (as an Echo guard) detonates an explosive that kills all the metas in stasis. Superboy's plan succeeds and he bursts from the flames as if he was trying to help them.

The three metas swear allegiance to Superboy for helping them today in light of now being orphaned. The Titans arrive to find all the guards dead and Volt injured. 'Imra' reveals she was able to locate the other terrorist bases and that they will work 'with' Echo to end the threat. Superboy sends the Titans back to the present and stays behind to ensure his plan is complete. He lies that Harvest wants him in the present and that as he returns to change the past, the future will reshape around them because of their work and Harvest has decided they must stay in the future to monitor the changes.

The trio of fools agree to help Superboy and Harvest and he then disappears into the time stream. They will continue his mission to kill superhumans off and with Harvest oblivious of their existence because they are under the assumed names of the real Legion, when the time comes Superboy will have an army of his own to defeat his father.

Superboy falls flat on his backside in New York city in the present day... his plans must now begin...

Story - 4: Superboy is suffocated by his Teen Titans membership. The story isn't allowed to flow naturally as it needs to tie into the threads from that story. Still the evil plan put in place by Jon and his clever manipulation of the gullible heroes is neatly played out. It's very well written and as Jon's story is further fleshed out I'm sure he'll be a far more developed character. Right now he is still two dimensional but that is a fault of the Kid Flash storyline exacerbating this one. Given time to breathe by itself I'm sure this title will excel.

Art - 4: The art shows signs of brilliance in places only let down occasionally by some panels appearing to be rushed or lacking in detail. Perhaps that is due to the inking not being as depth inducing as it could be. Either way the pages aren't as strong as they have the potential to be.

Cover Art - 5: The cover is just bursting with energy and gives the feeling of an anime animation cel. The cover looks stunning.