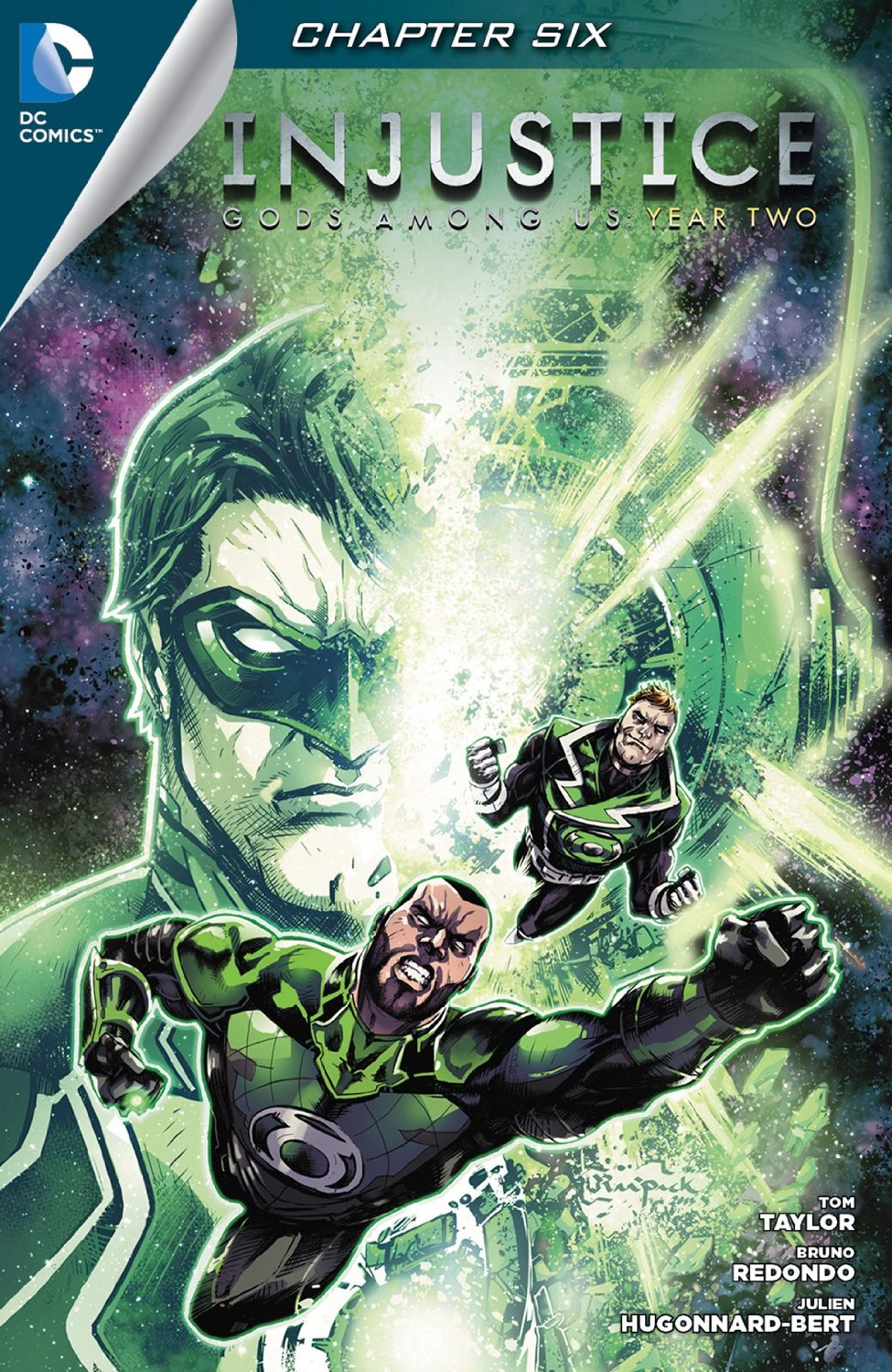 Click to enlarge
The Guardians begin to recall Green Lanterns from various planets, in the form of Kilowog, Tomar Re, Arisa Rrab, and John Stewart. On Earth, the first batch of Regime Superman's enhanced security force is embedded in Gotham City. Commissioner Gordon is against the move, and seeks aid in the form of Oracle, also known as Barbara Gordon, his daughter. Barbara is surprised that Gordon knows, but he reminds her that he's a detective. He asks to the whereabouts of the Batman, and reveals to Barbara that he has terminal cancer. Barbara reveals that there is a plan to stop Superman. Hal Jordan has a talk with Carol Ferris, who is flustered at Hal leaving her once again. The talk ends when Ganthet states it's time to leave, and Guy Gardner reassures Jordan that the Earth won't be broken in his absence.

Story - 3: Injustice, this outing, was an appetizing mix of air pies and breeze fritters. Half of the issue was lost to action that constituted no movement of the plot, and the chosen actions and players for this installment are quite questionable in relation to the thrust of this set-up: the Guardians of the Universe have taken issue with Regime Superman's encroachment of Earth. That's the story. The sub-plots should help the header, but that hasn't yet happened. Oracle, Commissioner Gordon, Carol Ferris, they all come across as out of place and unwanted. They're buffers or padding that's keeping the story from moving at a better pace, and get to the conflict that is the driver of this storyline. While the outcome won't affect the principal players one way or another i.e. Superman will still enforce his regime, Green Lantern will still be a member of it, Oracle's plan will have no lasting effect, if any, a confrontation with the Guardians could prove entertaining... if we can ever get there.

Gotham City is a notorious example of the limitless power of DC superheroes, and hence the limitless problems that have to be set before them. Superman has Kryptonite, but Batman has Gotham, the city that is riddled with crime, despite having the greatest crime fighter and manhunter the world has ever known. The Batman has every contingency, he can defeat Superman, so the Internet says, but Gotham? Gotham remains forever out of his reach, his never-ending battle that he must ultimately lose, as the Batman is still mortal and Gotham will live on, crime infested or not. That is, it will be crime-infested until you throw in a few dozen super-types. If crime is reduced in Gotham due to this measure, it's a telling statement. Gotham can be cured of its ills, just not by mortal means. Not by the Batman. For years the rationale was that Superman couldn't clean-up Gotham, as it was a unique city that required a unique touch. It will be interesting to see if that unique touch needed was a grove of faceless storm troopers. Black, faceless, super-powered, and bearing arms, what city wouldn't welcome such aid, and surely there would be no misgivings about it.

John Stewart makes a great point as he leaves Ryut to heed the Guardians call. There is no reason for him to leave Ryut unattended, and it seems the Guardians have lost a step in their omniscience. A world of undead creatures does constitute a potential problem, and more so than one with the actions that are occurring on Earth. The decision to not even play triage with the situation makes it seem that Ganthet's interest in Earth is personal, which is out of character for the Guardians, but since just about everyone is out of character, it should read just fine for some. It will be hard to rationalize the Guardians' involvement in Earth's business, as they have the Lanterns to be their involvement, and the Green Lantern Corp has a code to follow as dictated by the Guardians. What makes Earth so special, aside from the lines of dialogue where the reader is told that Earth is special? When Superman repels the Guardian offensive, how hard will it be to believe that Oracle and company can compose a strategy for his removal? It's not quite a tightrope walk, but it's certainly a balance beam for Taylor to dismount from and stick it.

I graded the issue up for one thing: Commissioner Gordon telling Oracle that he's a detective. That was a good scene, and a reminder that more than likely, Gordon turns a blind eye to the Bats he knows are flying about Gotham. There's really no feasible way for Gordon to know the secrets in continuity, not without compromising the underpinnings of Batman's mythos, but it's nice to be reminded that Gordon is a detective, a great one, and not a fool for anyone.

Art - 3: A serviceable issue, but bland as it suffers from a script that doesn't call for much, and so much isn't delivered.